Stagflation – Another Blast from the Past – American Thinker<!—->

“History doesn’t repeat itself but it often rhymes” is a quote attributed to Mark Twain. In the political and economic world, this maxim is proving true, as we are witnessing today.

The misery index is one such bit of history, dating back not that far, to the Jimmy Carter presidency of the late 1970s. Calculated by adding the unemployment and inflation rates together, the misery index “measures the degree of economic distress felt by everyday people.”

It is currently just over 12 percent, and that’s being generous given how the government calculates inflation. More on that later. The misery index reached 15 percent just after COVID hit and the country locked down, closing businesses left and right. During the Carter era it topped 20 percent.

Former House Speaker Newt Gingrich was recently interviewed on Fox News and brought up the misery index along with another golden oldie, stagflation. This is a term first used in the 1960s in the United Kingdom, describing a period of a stagnating economy along with rampant inflation, hence the coined term.

Various definitions have been applied to stagflation. Investopedia describes, “Stagflation can be alternatively defined as a period of inflation combined with a decline in the gross domestic product (GDP).” Former Speaker Newt also used the term in his Fox News interview, tying them both together:

We lived through this with Jimmy Carter. It ended up being called stagflation and people ate it up. The unemployment rate and the inflation rate and turn it into the misery index by adding the two numbers together, we have a grave danger of being worse off in another year or a year-and-a-half than we were under Jimmy Carter.

Stagflation may be the anchor hanging on Democrat necks ahead of the November midterm elections. Real GDP contracted in the first quarter of this year by 1.4 percent, negative growth. The last such contraction was during the first half of 2020 when COVID shut down businesses, travel, restaurants, and life in general. Now America is post COVID and the economy should be booming. One more quarter of negative GDP puts us officially into a recession, something the Democrats will be delighted to showcase as they ask American voters to leave them in charge of the nation’s affairs. 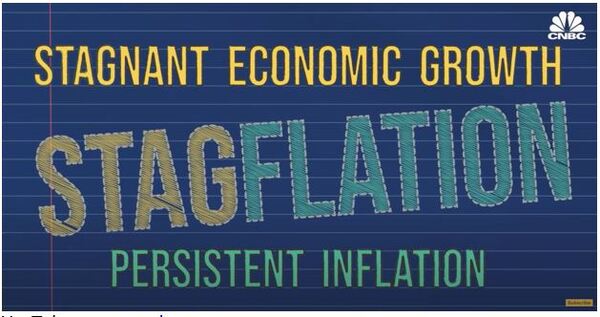 Inflation, we were told by Federal Reserve Chairman Jerome Powell, was “transitory.” Just a mere blip, a temporary and minor spike in prices, much like calling the BLM riots in the summer of 2020 “peaceful protests.”

Economic realists pounced on Powell’s naïve assessment. “The characterization of inflation as transitory is probably the worst inflation call in the history of the Federal Reserve, and it results in a high probability of a policy mistake,” according to Allianz Chief Economic Advisor Mohamed El-Erian.

Inflation is calculated based on many assumptions of the costs of various goods and services, all plugged into complex formulas that would make any non-mathematician’s head spin. It is the change in cost of this basket of goods that determines the rate of inflation. Like any other formula, the maxim “garbage in garbage out” applies.

For example, energy is only 7 percent in relative importance in this basket of goods. Is energy important? Ask anyone filling their car or truck with gasoline every week, spending over $100 when a few years ago they paid half that amount. A person living in a studio apartment in Manhattan, riding the subway to work, finds energy costs far less important and expensive compared to someone from western New Jersey, living in a house, commuting by car each day into Manhattan.

While the Fed may offer low numbers and platitudes, reality has a different flavor as Forbes points out,

The Shadow Government Statistics website explains how the consumer price index, used to measure inflation, is flawed. Traditionally this index, “reflected assessing the cost of maintaining a constant standard of living, as measured by a fixed-basket of goods.”

While the official government figure for inflation is at 8.5 percent, compared to only 4.2 percent a year ago, the true inflation figure is north of 15 percent. Why does the government downplay inflation? Two reasons.

One is politics. President Biden already has “I did that” stickers peppering gas pumps around the country. High inflation numbers don’t help the political party currently in charge and largely responsible for the rampant inflation. 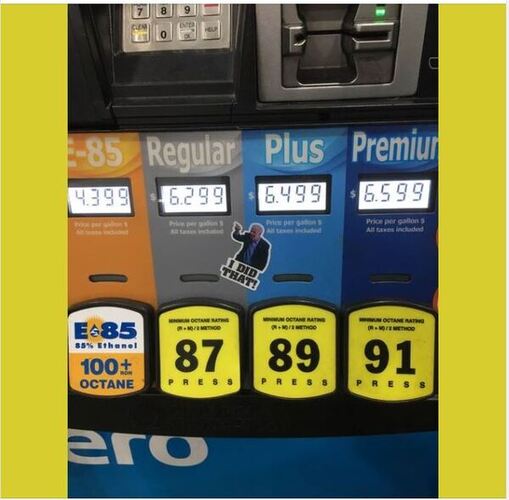 Second is government itself. Benefit programs, from welfare to Medicare, are linked to the CPI. As the CPI rises, so should these benefits, but that will cost the government more money, dollars they prefer to spend on tampon dispensers in boys’ rooms in schools or to send to Ukraine to secure their border, while leaving ours wide open.

It’s not clear whether the Republican Party offers a good alternative to Democrat policy nonsense but expect the term “stagflation” to become a campaign issue as it should be for any candidate fed up with the current trajectory of the economy and America.

Voters certainly care. Rasmussen Reports found, “87% of voters are concerned about inflation, including 62% who are very concerned, findings nearly unchanged since January.”

This is a winning campaign issue for Republicans, assuming they seize it and offer a cogent alternative, as Ronald Reagan did in 1980, winning a massive electoral college victory after the first generation “I did that” president named Jimmy Carter wrecked the economy. History can and should repeat itself, but given the current weak-spined GOP, who knows?

Brian C. Joondeph, M.D., is a physician and writer. Follow me on Twitter @retinaldoctor. Or Truth Social @BrianJoondeph.