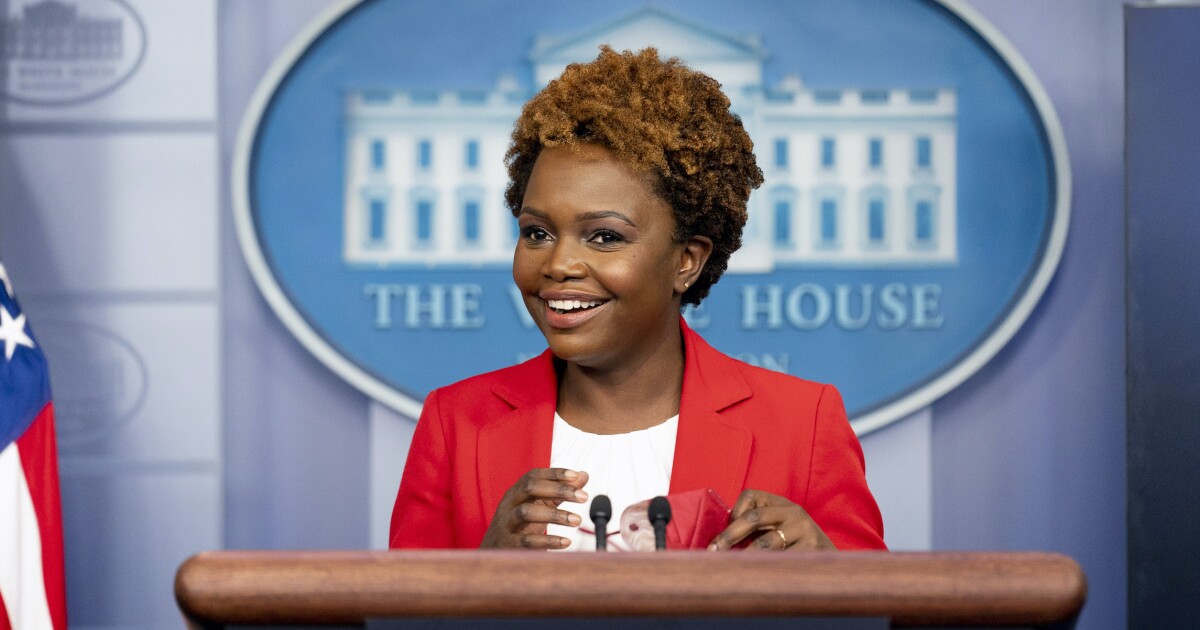 Jean-Pierre, who will replace Jen Psaki next week, has a history of controversial tweets about the 2016 election in which Trump defeated Hillary Clinton in a 304-227 vote in the Electoral College.

Jean-Pierre repeatedly said Trump was not the legitimate winner, calling it “stolen.”

In May 2018, she tweeted, “Boom” in response to Judy Woodruff of PBS News tweeting that Obama director of national intelligence James Clapper “says he’s personally concluded Russians not only influenced but DECIDED outcome of 2016 election.”

Jean-Pierre also tweeted, “Jimmy Carter for the win” in June 2019 when the former president said that if the matter were fully investigated, it “would show that Trump didn’t actually win the election in 2016. … He was put into office because the Russians interfered on his behalf.”

Jean-Pierre sent a tweet in December 2016 that said, “Why I Will Not Cast My Electoral Vote for Donald Trump.” It was the title of a New York Times opinion piece by Republican elector Christopher Suprun, who wrote, “The election of the next president is not yet a done deal. Electors of conscience can still do the right thing for the good of the country.” He cast a vote for then-Ohio Gov. John Kasich later that month.

Jean-Pierre was named senior adviser and national spokeswoman for MoveOn in April 2016. The left-wing group announced in mid-December 2016, “With five days before the Electoral College meets, MoveOn members will mobilize to ask electors to reject Trump because of Russian interference.”

She responded to a Huffington Post tweet that month that quoted former Democratic Sen. Harry Reid saying someone on the Trump campaign “was in on” Russia’s election efforts. She tweeted: “[Mike] Flynn, [Paul] Manafort, and The Donald himself (inviting Russia to partake in espionage on our election) #PutinLoveAffair.”

Reid further said in the interview that “there is collusion there” and called on Trump electors to “do the right thing.”

Jean-Pierre, a member of “#TheResistance” who used the hashtag often, repeatedly touted collusion claims, tweeting, “#PutinsPuppet #TrumpRussia #TrumpRussiaCollusion” in March 2017 in response to Atlantic writer David Frum saying that “Putin got the president he wanted.”

Trump campaign associate George Papadopoulos, who pleaded guilty to a false statements charge, had his lawyers say in October 2017 that their client looked forward to telling his story. Jean-Pierre replied, “Papadopoulos’s guilty plea tells us a lot already … @realDonaldTrump here is your COLLUSION!!”

She also tweeted in January 2018, “Collision[sic], delusion = Donald Trump” in response to Trump, who said, “There is collusion, but it’s really with the Democrats and the Russians.” Jean-Pierre tweeted next month, “#TrumpColluded. Good night.”

Jean-Pierre also repeatedly tweeted about Russia’s alleged hold over Trump. She twice said in September 2016, “Yes, @HillaryClinton you are indeed prepared to be President of US. @realDonaldTrump is prepared to run for president in Russia.”

She tweeted in March 2017: “Distraction, misdirection, cover up … we have to keep asking about Trump Russia ties. #Russiagate #TrumpRussia #TrumpPutin.”

Jean-Pierre tweeted a clip from The Simpsons mocking Trump in May 2017, adding, “Humor imitates Life has been the story of this administration #TrumpRussia #TrumpLies.”

She fully embraced the Mueller investigation, repeatedly tweeting about “#MuellerTime.”

In January 2018, she claimed: “Robert Mueller is taking down the door of the Oval Office heading straight for Donald Trump. #MuellerTime.”

In June that year, she claimed: “Mueller is playing chess, while everyone else under investigation is playing Russian Roulette.”

She tweeted in November 2018, “What does Robert Mueller have on Donald Trump? Because Mr. Orange hue has reached a whole new level of irrational, erratic and unhinged behavior lately.”

What does Robert Mueller have on Donald Trump? Because Mr. Orange hue has reached a whole new level of irrational, erratic and unhinged behavior lately.

She repeatedly called for Trump’s impeachment related to Russia, including a June 2019 opinion piece for Newsweek on “the corruption at the heart of the Russia probe.”

John Durham is conducting a criminal investigation into the origins and conduct of the Trump-Russia inquiry.