Surprised by the Midterm Election Results? Take a Look at the Data – American Thinker<!—->

For many Republicans, the final midterm election results were surprising— especially in the states of Arizona, Nevada, and Pennsylvania. Based on polling, it looked likely that Kari Lake, Adam Laxalt, and Mehmet Oz would win their contests. I believe that there are only three likely explanations for the unexpected results: late campaign surges, polling error, or aggressive ballot-harvesting.

Some Republicans are falling for an illogical narrative put forth by Democrats and the mainstream media. It goes like this: Although Republican candidates were higher in the polls, at the last minute people voted for Democrats because:

Certainly, these were real and very potent factors for many if not all Democrats, and for some independents. However, they were all “baked into the cake” long before the election and long before pre-election voter polls were administered. They were not last-minute issues.

I can think of a couple significant last-minute campaign developments, but they worked against the Democrats— not for them. Many pundits thought John Fetterman’s late October debate performance would put him into a political death spiral. Indeed, he was polling lower than Oz, just before the election. However, he ended up winning by over 4 points— somehow.

And Katie Hobbs was roundly criticized for her deer-in-the-headlights interviews near the end of the campaign. Just before the election, Hobbs was polling substantially below Lake, yet she won. Lake’s pre-election dominance is evident from the polling averages compiled by FiveThirtyEight: 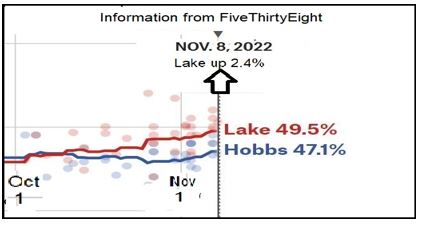 When we look at the trend shown in Figure 1, and at the ending polling disparity (2.4%), it is hard to see how Hobbs managed to win.

Did 12 out of 13 companies make the same error, and in the same direction?

We see the same pattern with the senatorial contests. Figure 3 displays the final polling averages, as produced by RealClearPolitics, for seven key races. In each case the GOP candidate was leading just before the election, even though these races were in different states and conducted by different pollsters, and for different candidates. This pattern does not suggest polling error. The actual election results (courtesy of Reuters) are also shown.

Three of the seven contests were won by Republicans, but look deeper. In every case, the Democrat candidate’s election results were sharply higher than the final polling percentage. For the most part, that was not the case for Republicans, as we can see in the right-side columns in Figure 3.

Figure 4, below, presents the same information in graphic form. Keep your eye on the “zero” line. It shows the expected results for both Democrats and Republicans. Democrats are entirely above the “expected” line, signifying that they beat the predictions in every case. On the other hand, Republicans are much lower, and mostly below the expected line.

Before we address ballot-harvesting, let’s summarize: Perhaps I missed it, but it seems there was no last minute erosion of support for GOP candidates. And polling error is unlikely, given that the GOP lead was shown by many different pollsters, in different states, and for different candidates. Yet, the Democrat candidates consistently beat expectations by quite a lot. Why was that?

It is just a theory, but I believe that aggressive ballot-harvesting is the most likely explanation for the disparity between pollster predictions and actual results in the 2022 midterm elections. In the movie, 2,000 Mules, True the Vote (TTV), the organization run by Catharine Engelbrecht and Gregg Phillips, described the prevalence of ballot-harvesting in the 2020 election. Although its estimates are only rough approximations (based on cell phone analysis), TTV believes there were up to 200,000 and 275,000 harvested ballots in Arizona and Pennsylvania, respectively. Nevada was not included in the TTV analysis, but since the end of 2020, Nevada has taken all restrictions off of harvesting. It is now legal to harvest ballots in Nevada, and it can be done anonymously in any quantity with ballots from unregistered homeless people, drug addicts— anyone. [Editor’s note: See also phantom voting, previously published at American Thinker by contributor Jay Valentine, here and here.]

When it comes to the legality of ballot-harvesting, there is confusion. As noted, it is now completely legal in the state of Nevada. In most other swing states, including Pennsylvania and Arizona, it is (technically) allowed only within tight limitations (e.g., for family members). That said, large-scale harvesting operations have been performed in many states, and I believe they often lead to serious election law violations. There are three reasons for this:

Harvesting advocates (mostly Democrats) claim the activity is simply a way to help disadvantaged voters deliver their ballots to a mail box or to a ballot drop box— sort of like a courier service. Do you buy that? Common sense and the polling results tell us that harvesting is much more insidious.

Some Republicans say that the GOP needs to start large-scale harvesting operations, to compete with Democrats. I hope they do not do it because it is a dirty, dishonest practice that should not be tolerated. It is a real “attack on democracy.”

Someday, a whistleblower may step forward to provide hard evidence (if it exists) that can be investigated and prosecuted. Until then, Republicans should consider how very lucky they are. They won a majority in the House of Representatives for, possibly, one reason: Harvesters did not think their services were needed in the deep blue state of New York!

Joe Fried is an Ohio-based CPA who has performed and reviewed hundreds of certified financial audits. He is the author of the new book, Debunked? An auditor reviews the 2020 election— and the lessons learned (Republic Book Publishers, 2022). It provides a comprehensive overview of irregularities that affected the 2020 election.