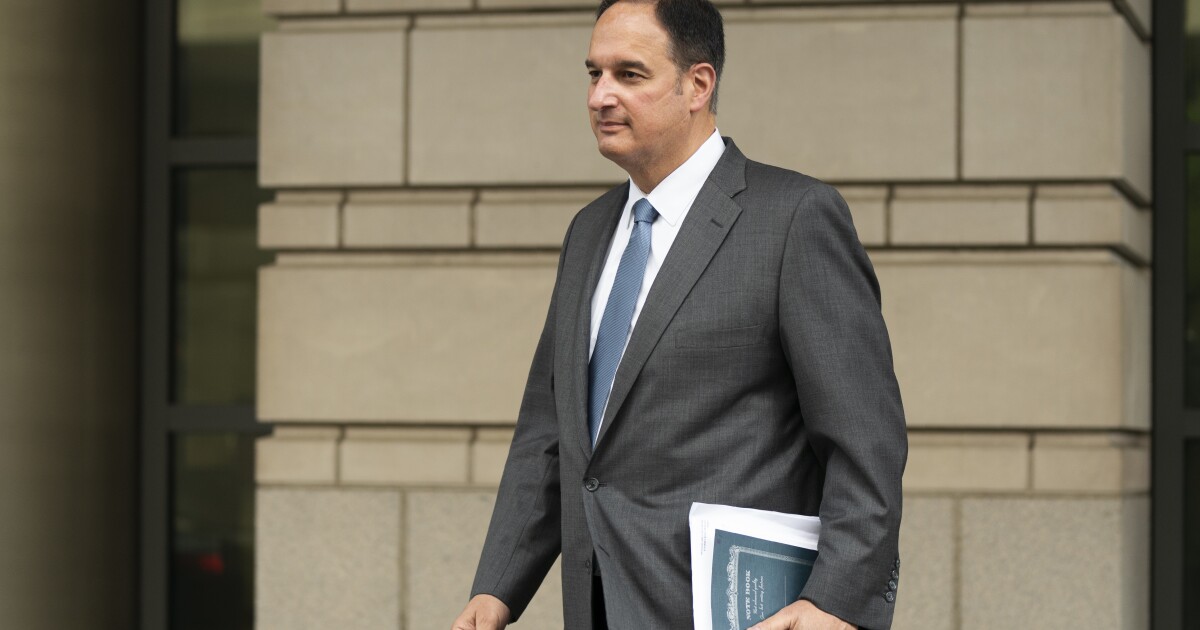 Michael Sussmann told the CIA he was "not representing a client" when he pushed debunked Trump-Russia collusion allegations in early 2017, a former agency officer testified Friday.

Michael Sussmann told the CIA he was “not representing a client” when he pushed debunked Trump-Russia collusion allegations in early 2017, a former agency officer testified Friday.

Kevin P., who retired from the CIA a few years ago after more than 32 years of service, testified Friday about a Feb. 9, 2017, meeting Sussmann had requested and obtained with the CIA and said, “He said he was not representing a client.”

The comments are similar to the lie special counsel John Durham accuses Sussmann of making to the FBI in 2016.

Sussmann was indicted last September for allegedly concealing his clients, Hillary Clinton’s 2016 presidential campaign and Rodney Joffe, from FBI general counsel James Baker in September 2016 after pushing claims of a secret back channel between the Trump Organization and Russia’s Alfa-Bank.

Durham says Sussmann similarly concealed his client, Joffe, when he pushed further collusion claims to the CIA in February 2017.

The special counsel said Sussmann pushed the Russian bank allegations and also claimed data he had access to “demonstrated that Trump and/or his associates were using supposedly rare, Russian-made wireless phones,” called YotaPhones, “in the vicinity of the White House and other locations.” Durham found “no support for these allegations” and revealed the CIA “concluded in early 2017” that the Alfa-Bank and YotaPhone information was not “technically plausible.”

HILLARY CLINTON SIGNED OFF ON SHARING ALFA-BANK CLAIMS WITH MEDIA

A senior officer in counterintelligence missions at the time, Kevin P. said Sussmann told him other lawyers at Perkins Coie represented Clinton and the Democratic National Committee, but “he made it clear that he did not have any connection with that.” He noted that “he had contacts that provided him the information” related to the Alfa Bank allegations, as well as what the CIA veteran referred to as “secondary information” on “another technical security threat.”

Sussmann provided the CIA with thumb drives and white papers, similar to what he had done with the FBI. Kevin P. said, “In the meeting, I said to Mr. Sussmann that it was likely this information would be forwarded to the FBI.”

After the meeting, Steve M., a CIA employee who was also at the meeting, sent a draft memo to Kevin P. that day. A final version of that memo, corrected by Kevin P., reads, “Mr. Sussmann advised that he was not representing a particular client and the information he was volunteering to us was not privileged. His contacts wished to provide information to the [U.S. government] through Mr. Sussmann, preferring anonymity citing a potential threat from the Russian Intelligence Services.”

Kevin P. stressed Friday that Sussmann “did not refer to them as clients in the meeting — he referred to them as contacts.” The retired officer said he had used his contemporaneous notes to refresh his recollection back in 2017 when editing the memorandum.

Another witness Friday, Mark Chadason, also a former CIA employee, said he was asked by a friend to meet with Sussmann, meeting on Jan. 31, 2017, for breakfast at a hotel in northern Virginia. He said he took notes of the meeting and typed it up into a memorandum the same day.

At that meeting, Chadason testified that Sussmann told him he had a client and that his client would go to the New York Times if the CIA wouldn’t meet with Sussmann.

Chadason’s memorandum stated, “Sussmann said that he represents a CLIENT who does not want to be known, but who had some interesting information.”

Chadason wrote that Sussmann would not provide the client’s identity but that he “was able to elicit that the CLIENT is an engineer with number of patents, and is most likely a contractor to the [intelligence community]” and that “Sussmann also said that [the] CLIENT is a Republican.”

Joffe was a confidential human source for the FBI at the time but was cut off in 2021 due to revelations in Durham’s investigation, although the judge said the jury could not be told about his termination. Shortly after Clinton’s loss to former President Donald Trump in November 2016, Joffe said in an email, “I was tentatively offered the top [cybersecurity] job by the Democrats when it looked like they’d win. I definitely would not take the job under Trump.” The jury is not allowed to see that email either.

Chadason sent an email to CIA employees that day, writing, “Please remember this guy is a partisan lawyer who works closely with DNC. So I am not sure what the real story here is — but I am sure you guys will figure it out.”

He also sent the CIA his memo about the Sussmann meeting.

Kevin P. testified Friday that he didn’t recall reading that particular memo before meeting Sussmann himself but said he would’ve expected the lawyer to say he was representing a client if he had read the emails stating that he was.

Defense attorney Sean Berkowitz asked Kevin P. whether he had read Chadason’s memo, which used the word “CLIENT” over a dozen times, prior to meeting with Sussmann, and he replied, “I do not recall reading it, but I may have read it.” Berkowitz also pointed to a Jan. 31, 2017, email from Chadason that labeled Sussmann a “prominent lawyer who is representing a client.”

Kevin P. said he didn’t recall reading that email beforehand but insisted again that Sussmann told him he was not there for a client.

The FBI, CIA, special counsel Robert Mueller, a bipartisan Senate Intelligence Committee investigation, and Durham’s team have all cast doubt on or shot down the Alfa-Bank claims.

Baker testified this week that the final conclusion of the FBI was that “there was nothing there.”

The CIA said Sussmann told them he had met with Baker “on a similar, though unrelated, matter.” But Durham said that was “misleading” because information regarding the Alfa-Bank allegations that he had pushed to the FBI was among the materials Sussmann provided to the CIA.

Sussmann denies wrongdoing and has pleaded not guilty.