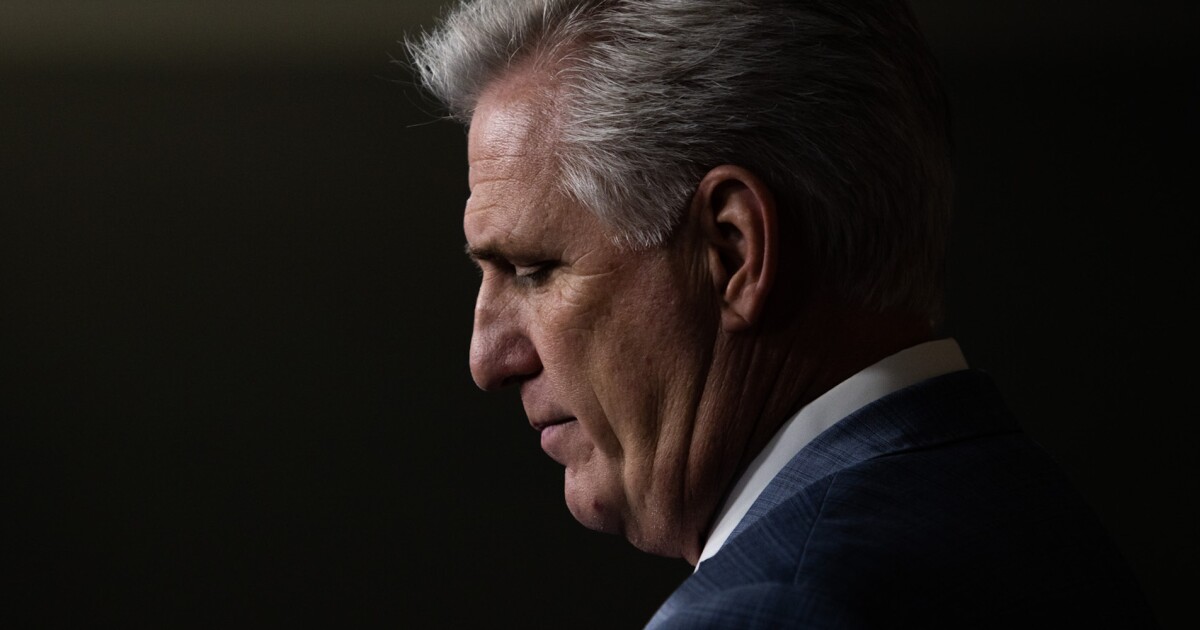 Tensions within the House GOP are rising as uncertainty surrounds House Minority Leader Kevin McCarthy's (R-CA) ability to secure the support needed to obtain the speaker’s gavel during the floor vote on Jan. 3.

Tensions within the House GOP are rising as uncertainty surrounds House Minority Leader Kevin McCarthy’s (R-CA) ability to secure the support needed to obtain the speaker’s gavel during the floor vote on Jan. 3.

McCarthy’s critics haven’t softened their stance on the California Republican, with multiple conservative lawmakers telling the Washington Examiner more members will publicly come out against the leader in the coming weeks. Those backing him for the spot have argued that chaos on the floor is counterproductive to the party’s success as it enters the new Congress and that the party must rally around him.

Facing razor-thin margins, McCarthy can lose just four votes unless defectors opt to vote “present” or not participate in the floor vote, bringing down the threshold he needs to become speaker.

Members of the centrist Republican Governance Group unveiled a letter on Friday calling on the conference to rally behind McCarthy,

“Just a few weeks ago, we came together to elect our party leaders, all of whom were chosen overwhelmingly and received support from all corners of our Conference. Today we urge you to unite behind Kevin and our other chosen leaders and allow our Conference to move forward united so that we may begin to deliver results for our constituencies,” they wrote.

“Many of us — if not all — have newfound power in the slim majority we now find ourselves in. But governing is fundamentally a team sport. It comes down to a simple choice: do you want to make a point or a difference? If your answer is the latter, then Kevin McCarthy deserves your full support,” they added.

RGC Chairman Dave Joyce (R-OH) said he believes trying to tank McCarthy’s bid on the floor would undermine Republicans’ ability to demonstrate that they can govern.

“This Conference cannot handcuff itself to a burning building before we gavel in the 118th Congress,” he said in a statement. “We are the dealmakers without whom this legislative body cannot govern, and we intend to provide the American people with a working majority.”

McCarthy has asserted that he will bring the fight to the floor on Jan. 3, cautioning that voting against him could lead to a Democrat landing the top position. He has also publicly said he is bullish about his odds of securing the position.

Multiple McCarthy allies expressed cautious optimism that he will succeed in his quest to obtain the top spot.

“I think he’s gonna do it. He’s gonna do it. Yeah, I think he’s really working to hear members’ concerns, to listen to their concerns and hear what changes they’d like to see — to make this a better, more productive place next year,” one GOP lawmaker told the Washington Examiner on Friday.

“I’m seeing it firsthand, we’re having real, open discussions about the future of the House and how it should be run, and he’s really seeing people’s feedback and taking it into account and making changes,” the lawmaker added. “So I think it’s a good exercise and probably at the end of the day makes us a stronger, more united conference.”

Another senior member said they believe he will pull it off but noted they have spoken with members who are still on the fence but haven’t publicly come out against him.

“Because when you talk to people individually, it seems like beyond those five that are already public, mostly everybody can vote for McCarthy,” the member said.

But some within the party have cast doubt on him having a viable path, with one senior GOP source likening those working for McCarthy to “the coal stokers on the Titanic. Shoveling coal to keep the lights, but the ship is still going down.”

“McCarthy came up through those speakerships and has been in the leadership during those speakerships, and so we have to ask, what’s going to be different? And if it’s not anything substantive, then why should we be voting for McCarthy for speaker?” he added.

Cline said McCarthy is taking strides to include more conservatives in key conversations but doubted that recently debated conference rules changes would be enough to sway some within the party to support him.