Democratic leaders are encouraging lawless, threatening behavior against Supreme Court Justices and their attorney general refuses to enforce the law against such behavior.

More than a decade ago, Michael Walsh dubbed the Democrats, “A criminal organization masquerading as a political party.” I once thought this was overstating the matter, but I no longer do. If you can’t fully accept this characterization, recent events surrounding the leak of the Supreme Court draft opinion overturning Roe v. Wade, should unshutter your eyes and let in the light. Democratic leaders are encouraging lawless, threatening behavior against Supreme Court justices, and their attorney general refuses to enforce the law against such behavior. This criminal organization has a huge public relations outfit working around the clock for it, the Major Media, which is why you may have missed this.

It’s hard to ignore the fact that the leaders of the party are openly inciting violence in an effort to force the Court to decide cases based on fear of the mob, instead of the law.

In May, pro-abortionists began illegal parades around justices’ homes as the draft opinion of Dobbs v. Jackson Women’s Health Organization was leaked. Attorney General Merrick Garland did not one thing to enforce the applicable federal law by arresting the protestors. In a bipartisan display of concern, the Senate passed a bill to extend around-the clock security protection to the justices’ families. The House Democrats have refused to sign on.

Not one single Democratic leader has spoken out in opposition to the terroristic actions against the Court.

Worse, Senate Majority Leader Chuck Schumer clearly incited this threatening behavior, telling the crowd assembled outside the Supreme Court, “I want to tell you Gorsuch. I want to tell you Kavanaugh. You have released the whirlwind, and you will pay the price.” That clear threat also violated federal law, but don’t hold your breath for Garland to do anything, or Schumer to retract it, or any Democrat to criticize his intemperate statement. Chief Justice John Roberts condemned the statement as dangerous, to which Schumer replied he was “misinterpreted,” that he meant Republicans would suffer, though it would take a skilled gymnast to maneuver a twist like that. And I don’t find that explanation persuasive. 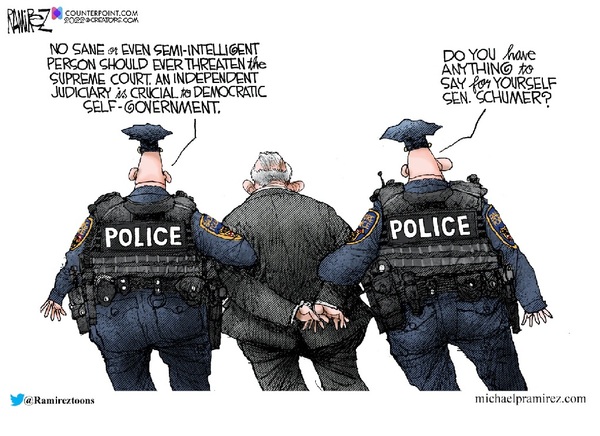 Last Wednesday, a heavily armed man (a Glock 17 with two magazines and ammunition, pepper spray, a tactical knife, a hammer, a screwdriver, a crowbar, zip ties, and duct tape, among other gear), Nicholas John Roske, was arrested outside of Justice Brett Kavanaugh’s home, after he approached a U.S. Marshal and expressed his intentions to kill the justice.  Roske’s plan was to sneak into the home and he even had specially pad-soled boots to do so without waking the family. Even after this, the protestors have returned to Kavanaugh’s home to demonstrate. Why Kavanaugh? He joined the majority in the Alito draft opinion but apparently the Chief Justice had not yet circulated Kavanaugh’s concurrence, and the hope will be that they can still change his mind.  Roske, of course, had a more brutal strategy in mind. Indeed, at least one man who (has since removed it), tweeted that if the conservative justices were assassinated, Biden could nominate and get confirmed new justices more amenable to their way of thinking.

Only a stupid person would cave to such pressure. Do it once, and every highly charged decision would mean more of this. Josh Blackman is right:

…can’t fathom why anyone would want to serve on the Supreme Court. To be more precise, I can’t fathom why any conservative would want to serve on the Supreme Court. Liberal jurists are feted with honors at every juncture. But conservative jurists are excoriated and personally attacked. I wonder, in hindsight, if Kavanaugh still would have pursued a position on the Supreme Court, knowing what we know now: the first confirmation hearing, baseball tickets, Spartacus, Christine Blasey Ford, Michael Avenatti, Ronan Farrow, the second confirmation hearing, yearbook, beer, Klobuchar, Saturday Night Live, Matt Damon, the Dobbs leak, and now an assassination attempt outside of his home. During this time, Kavanaugh and his family have been dragged through such painful experiences, one after the other. Was it all worth it? And to what end? To swallow the Chief’s blue plate special?

So is Professor Glenn Reynolds (Instapundit) who offers his idea of what Kavanaugh should do:

“I’d get in their faces, and add a concurrence naming democratic politicians who have attacked the court and accusing them of fomenting violence against it, and warning that Americans will, perhaps rightly, feel free to start ignoring the Court’s rulings if they feel they are the result of illicit pressure and threats of violence.”

After the attempted assassin was arrested, the domestic thugs continued to harass his wife and children and Justice Amy Coney

Barrett’s family as well. The home addresses of these judges and Barrett’s church and children’s’ school were publicized by an outfit called Ruth Sent Us which is coordinating this thuggery. (It’s ironic because in the name of former Justice Ginsburg they are demanding Roe not be overturned when even she conceded the decision had been a mistake.)

John Hinderaker at Powerline Blog offers a compelling explanation for the failure to enforce laws against intimidation of judges:

Nor can I think of another explanation of why leaders of the Democratic Party haven’t called off “Ruth Sent Us” in the wake of the Kavanaugh assassination attempt. Could they do so? I am pretty sure they could. But let’s find out! Who, exactly, is financing “Ruth Sent Us”? How do those people (or maybe just one person) relate to assassination-inciter Chuck Schumer and the Democratic Party generally?

Inquiring minds want to know. The effort to intimidate or, better yet, assassinate Supreme Court justices didn’t begin with marginal characters like Nicholas Roske, just like the idea of assassinating the House Republican baseball team didn’t originate with James Hodgkinson. The leaders of the Democratic Party are in the dock. Can they defend themselves?

So far, they haven’t even tried.

President Biden not only failed to condemn this outrageous behavior, he doubled down on it. In a tongue bath “interview” with Jimmy Kimmel he predicted a “mini-revolution” if the atrocity called Roe v. Wade is overturned by the Supreme Court.

Biden’s eliminationist rhetoric about mini-revolutions came just hours after police arrested a man with a gun and burglar tools in Supreme Court Justice Brett Kavanaugh’s neighborhood. Authorities claim he was determined to murder Kavanaugh. Why? Because in a leaked document, Kavanaugh signed on to overturn Roe. Police also say the man was upset over mass shootings.

Of course, once again, we see disparate justice. Indeed, the force of criminal justice brought harshly to bear on one side — even for legally protected conduct, while the worst criminal behavior that advances the Democratic party’s interests is ignored.

Where is Merrick Parents Are Domestic Terrorists Garland on this? Right. Nowhere. Parents waiting their turn and then speaking out against public school policy at public-are-welcome school board meetings are the real threat, not these actual lawbreakers whose violations are actually under his jurisdiction.

Here’s the thing, you can bet your last dollar that if the pro-life right were doing the same thing to leftist and left-leaning SCOTUS justices over their opposition to overturning Roe, the full power and fury of the law and federal government would drop on them like Thor’s hammer.

They’d rot in jail, every Republican politician from their town dog-catcher to their House rep and senator would be blamed.  There would be shrieks of threats to democracy, insurrection, and racism/sexism/insert whatever ism.  There would be bills voted on and passed with lightning speed to abridge the Constitutional rights of anti-infanticide proponents, the FBI would be sent out to look for still-boxed Lego sets, and the entire sprawling DHS would fan out sniffing under every rock looking for anyone who doesn’t support abortion until the moment of birth.

But it’s the radical left breaking federal law and endangering the lives of SCOTUS justices, their children, and their church members, so it’s just some people doing some things because they are “passionate” about a just cause.

Not satisfied with terrorizing justices and their families, these tyrants are just now plotting to blockade the Supreme Court, ostensibly to prevent the decision from being handed down.

If all this is news to you, you can thank the media, which has deliberately hidden it. The Washington Post covered the assassination attempt under Local Crime. As for the New York Times, you’d have to scroll through 16 stories of such significance as the Jurassic Park cast on its home page to find it.

Do you really want to live in a country controlled by thugs? You think there aren’t enough banana republics in the world, and you want to add this country to the crowd?