The real insurrection brewing in America isn't on the right despite the constant talk and promotion of this view. It is meant to hide the reality.

According to the propaganda narrative of the media, Donald Trump and the Republican Party foment insurrection and illegitimacy in American politics. Only the noble left, with its commitment to democracy, can defend America and its institutions and rule of law. This is hogwash and anyone free from the tyrannic propaganda of the media knows it. In reality, the left peddles insurrectionist language and promotes the idea of American illegitimacy so as to endorse insurrectionist behavior—“in the name of democracy” though.

Joe Scarborough, one of the most annoying individuals to ever purvey television propaganda, has recently called the Supreme Court “illegitimate.” So have other liberal opinion writers. And what does all this talk of Court illegitimacy bring? Insurrectionist beliefs. It is an announcement for haters of America to begin burning property and launching violent protests aimed at desecrating the rule of law in the United States. It is the go-ahead for the army of Bolshevik street-warriors to assail American institutions and the freedom they uphold. 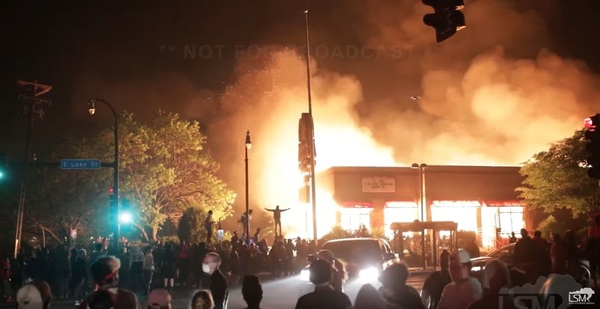 Though George W. Bush won his 2004 reelection with a majority of the popular vote, expanding and building upon his support for the War on Terror and the toppling of Saddam Hussein at the time, Christopher Hitchens of Vanity Fair wrote of election irregularities in my native state of Ohio—a full two years after the fact. The concern over irregularities didn’t just fade away after the election and inauguration.

I recall sitting in class the morning after the nationwide election with the classroom television on as my teacher was watching the continued count before the election was called. Despite Bush’s victory, Barbara Boxer and other congressional Democrats voted against certifying the Ohio election results. No one complained then and called Barbara Boxer a traitor.

Not only has the left consistently claimed election fraud and illegitimacy, but they also now claim the entire country is illegitimate. The United States is an illegitimate nation, an “unworthy republic,” a country that has pillaged and stolen its way to power. Freedom is an illusion. Our institutions are corrupt and rotten to the core. They must, because they are illegitimate and unworthy, be destroyed. So much for protecting American democracy and the rule of law. The very language of the left implies insurrection and in some circles, there are open calls for it.

If the left cared about the United States, as some in the media claim they do, then they wouldn’t use language that implies the opposite. But that doesn’t matter because we all know the façade. They present themselves as holier than thou, the true guardians and defenders of the made-up American spirit they’ve conjured out of the lust of their distorted hearts and seek to impose that spirit on the rest of us. Those who seek to stop the coming totalitarian imposition by the left are pilloried as totalitarians. Double-speak at its finest.

By arguing and subtly-to-now-explicitly condemning the United States and calling entire institutions of the country illegitimate, the left is preparing the real insurrection against America. If there is nothing legitimate about the country, if all institutions, including the last institutions against totalitarian restructuring, are demonized and destroyed in the court of public opinion.  Then the burning and looting of America we saw just a few years ago and the continual low-scale looting of America permitted by Bolshevik Democrats today, can manifest in full force.

America must burn because all of its institutions and laws were originally enacted by white supremacists. There can be no redeeming such institutions and laws. Only by destroying America can a “new” America be made. But that won’t fly. So softer language is sometimes used. “Transformation.” “Reform.” “Realizing our ideals.” That is mere sophistry to distract from the destabilizing and totalitarian policies the left aims to actualize.

The left wants to destroy and alter the organs and institutions of American government to suit their own tyrannical desires. Patriotic conservatives, derided by Joe Biden as “ultra MAGA,” seek the restoration of the promise of American self-governance and the autonomy of states and communities from the federal leviathan. The left wants to implement its one-size fits all California politics across the entire country. Patriotic Americans want to be able to live their lives as they see fit without the interference of San Fransickos telling them how to live.

The militant and violent venom now directed at the Supreme Court is because the left sees, and has long seen (since the days of FDR), the Court as the last bastion of the rule of law preventing their totalitarian and insurrectionist ambitions from becoming reality. By delegitimizing the Court, the left opens the final door to their political insurrection and enacting their totalitarian agenda. The Court, with its duty to uphold the Constitution, is the last institution committed to the rule of law, upholding the American republic, and defending the true democratic spirit of America: self-governance independent of Beltway Bureaucracy.

Paul Krause is the editor of VoegelinView. He is the author of The Odyssey of Love: A Christian Guide to the Great Books, The Politics of Plato, and contributed to The College Lecture Today and Making Sense of Diseases and Disasters.