Will this be the final straw for conservatives?

The Ministry of Truth Is Where the Rubber Meets the Road – American Thinker<!—->

This is horrific and a direct attack on the Constitution.  And it also puts citizens on notice that opinions, and ideas, and editorials, and online comments, and unapproved newspaper articles that are not government-approved…are now illegal.  Non-approved government speech, thought, and writings will become a crime.

What Biden and his “Brown Shirts” are doing is exactly what dictators do.  They are making it illegal to have a different point of view.  The only ideas and thoughts and values allowed…will be those of the Biden regime and the Deep State apparatus.

Especially ominous is that Biden’s people are putting the Ministry of Truth in the Department of Homeland Security — the one that has all the guns, ammunition, and bombs, all the spying, surveillance, and espionage capabilities to “watch over” Americans.  Biden and his “Stasi” are serious about making it illegal to have a different point of view from the government’s.  They are making free thought, free speech, and free press illegal.

Mr. Biden has put himself on the same side as Stalin, Hitler, Castro, and Mao.  This is not an overstatement.  Communist China is pleased with Biden.  All of these dictators had in some way their own Ministry of Truth that did not allow the citizens to think and speak for themselves.  Biden and this Progressive regime will now make it illegal, and thus punishable by fees, forfeiture,  and prison time, to think and believe and say as Americans wish.

George Orwell in his dystopian novels 1984 and Animal Farm predicted this decades ago.  What Biden and his Progressive party are doing is right out of Orwell’s novels.  Only dictators limit free speech.  Only despots censure different opinions.  Only evil human beings do not allow for a different point of view.

Make no mistake about this Ministry of Truth: it is not about misinformation and disinformation.  It is about criminalizing speech, thoughts, and ideas that the government does not approve of.

The Biden regime and the Deep State are the same cabal that has put the J-6 freedom fighters in jail without official charges filed against them or bail being afforded to them.  As Biden does this, Xi Jinping smiles, and Stalin nods in approval.  When a group of evil people who are in charge of government put American citizens in gulags, which violates the Fourth and Fifth Amendments, then that same government will certainly criminalize speech that has not been approved by government.  This is not a slippery slope; this is a suicidal cliff from the beginning.

Unfortunately, Westernized democracies are beginning to look an awful lot like the CCP and China.  Australia looked anything but democratic in the lockdown of citizens who were not vaccinated.  And Canada looked a lot like an authoritarian regime in its crackdown on the truckers convoy.

This can happen and is happening in America.  One must wonder how long it will be until Tucker Carlson is arrested for “crimes against the state”!  Is Tucker living on borrowed time?

With the creation of the Ministry of Truth, there certainly will be financial punishment and prison time given to citizens who are convicted of misinformation and disinformation.  This will happen.  This is the purpose.

Will any of these be a crime of misinformation/disinformation, punishable by incarceration?

– To say the vaccine, the lockdowns, the closing of public schools, and the social distancing did not work at all.  And that herd immunity would have done much better.

– To say the 2020 election was stolen, and President Trump actually won.

– To say Joe Biden and the Biden family have illegal activities going on with the country of China, and he and his family have been bribed and thus compromised by China.

– To say there are only two sexes: male and female.

– To say it is a baby, a human being, from conception inside the womb.

– To say the Deep State apparatus in America has used the country of Ukraine to launder illegal money for the elites, and that is the only reason America is interested in backing and protecting Ukraine against Russia.

– To say the American government worked in concert with the Ukrainian government to create non-sanctioned bio-labs in Ukraine, much like in Wuhan, China.

– To say the COVID-19 virus came from a weapons lab in Wuhan, China, and that both America and China were working on it together.

– To say the “vaccine” is really not a vaccine, and at best is a therapeutic.

– To say the Biden government is corrupt and illegitimate and that Biden has dementia.

– To say the J-6  Save America rally was actually used by the FBI/CIA/NSA and Deep State as a false flag to imprison MAGA Nation into the gulags?

– To say Biden should be impeached because of his refusal to constitutionally protect our southern border from illegal immigration, illegal drug trafficking, and illegal child trafficking.

– To say that our rights come from God and God alone, and that no government can take these God-given rights away.

Would these statements now, under the Bureau of Disinformation,  become crimes against the state?  Probably.

The Supreme Court had better not be cowards-crooks-compromised; the Republican Party had better not be cowards-crooks-compromised.  Both bodies must step up.  Both bodies need to be out early and strong in saying this Ministry of Truth is illegal and unconstitutional from birth.  They must fulfill their obligation to the American citizens and to the Constitution and do the right thing…right away.  Regardless of the personal cost.  Now.

This indeed is the hill to die on; this is for sure the time to say, “Hell, no,” and it is the precise moment to declare, “We will not comply.”  We will not go quietly into that dark night.  It is approaching the time for choosing. 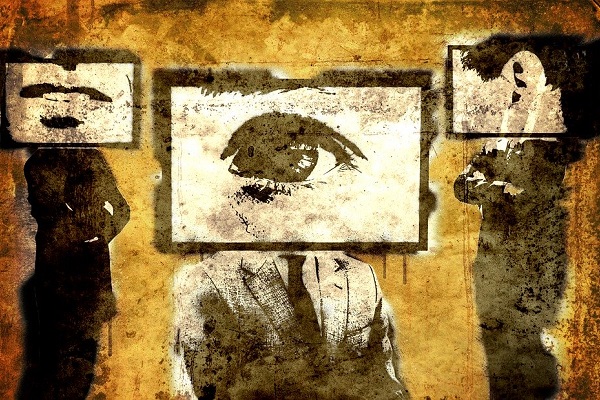