Alexandria Ocasio-Cortez wants us all to live without petroleum products? Good luck!

The transition from horses and buggies to automobiles took 50 years.  Even in that long time span, the evolution was not always beneficial to individuals or communities.  There were pros and cons on both sides.  “Before city dwellers complained about cars, smog, congestion and the loss of public space, they railed against stinking, fly-ridden horse crap.”

The difference between the 19th century and the 21st century is that new energy technology slowly grew in popularity while capitalism fueled the desire for a better life.  Now Americans are suffering during Biden’s presidential term, and the wounds are self-inflicted.  Politicians and regulatory bureaucrats are purposely destroying our energy independence while pretending their policies have nothing to do with issues of inflation, shortages, and possible rationing.  They are misdirecting blame to Putin and COVID-19, but they know better.  Biden and his cohorts are deliberately weakening our country for what seems like a blend of Marxist-green ideology.  They even think our pain is funny.

Today’s climate-mongers, led by ideologues such as Joe Biden, Nancy Pelosi, Chuck Schumer, Jennifer Granholm, Elizabeth Warren, and Alexandria Ocasio-Cortez, to name a few, are so mindlessly shortsighted that they apparently can’t think beyond the tips of their noses.  They demand we give up fossil fuels and replace them with renewable energy, and they want it right now!  Damn the consequences to you, me, and our country during the transition.  They know that they’ll all be dead in fifty years, so they’re not willing to let change happen incrementally, plus they have only two and a half years left of Joe’s presidency to complete their build-back-worse strategy, and if some of these ideologues are true to their stated belief, we will all be dead in the next nine years because of global warming.  Therefore, we absolutely must accept their scripture and change our sinning ways to save the planet.  All the more reason they push us toward presumed energy nirvana before our extinction occurs.  These people are not patient or logical, so they never think ahead to imagine what could go wrong if they succeed with their mission to rewire the world in their image.

Currently, they want all of us, including the poor, to either stay home or buy electric cars so we won’t have to rely on fossil fuels.  Hah!  Are they really that stupid, or do they think we are stupid?  For starters, don’t they know that most electricity is made with coal?  Do they truly believe they will be able to power their Teslas using unreliable wind or solar energy?  The energy supplied by wind and sun are God’s free gifts to the world, but to harness that energy for renewable purposes also requires an energy source, as well as petroleum byproducts, not to mention rare earths that are mostly owned by China.  Are they going to build these same windmills and solar panels using only renewable energy?  I don’t think so.

Those sleek new Teslas, with all their plastic accoutrements, will also need tires.  Sixty percent of all tires in the world are made from synthetic rubber, which is a byproduct of hydrocarbons.  If we get rid of petroleum, tires will become a relic of the past.

“Attempting to replace all fossil fuel tire constituents with biomaterials will be impossible in the near term and extremely difficult in the long term[.]”  How will earth movers without mega-tires to transport materials used to build our country’s infrastructure or build skyscrapers?  How will heavy loaders transport even a single wind turbine blade weighing 12 tons across the country?  How will we transport food and goods to different states without tires?  I guess we’ll need more trains — but oops, they also need fossil fuel to run.  How will John Kerry, Nancy Pelosi, and Hollywood stars land their private jets around the world without tires?

But then why worry about tires since planes are built using products made with petroleum byproducts?  Plane production must stop.  How will our military vehicles be able to defend our country and our allies without tires?  How will we be able to supply weapons of war to Ukraine?  Without the byproducts of petroleum for making tires and other plastics, transportation would be unrecognizable, if it existed at all.  We may have to resort to vehicles resembling Barney Rubble’s car.

Every one of us could ask thousands of similar, logical questions about what life would be like after the loss of byproducts of petroleum.  Greenies would have no viable answers.

One last thought, and not a pretty one.  Imagine a day when all petroleum products have been canceled.  As a consequence, its byproducts are no longer available.  Now imagine your least favorite greenie lunatic lecturing you from a podium about global warming and the end of times.  Embarrassingly, because all hydrocarbon synthetic fibers previously used to make almost everything that adorned our bodies have been prohibited, and because there are no more tires to support tractors to plow the fields for natural fibers like cotton and flax, and because PETA objects to anyone using animal fur or leather for clothing, the green lunatic is left standing before you — naked as the day he was born.  The empress has no clothes.  Nor can she distract your eyes from her nakedness by applying bright red lipstick, or gesticulating her red-polished acrylic fingernails, or prancing about in her sparkling Louboutin heels.  They all disappeared when petroleum was banned.

That isn’t progress.  It’s a step back in time.  Sadly, now that deodorant, soap, and shampoo have disappeared, our green empress smells like horse crap.

Time to send these know-it-all green Marxist lunatics, and all of their ilk, back to the cave where they belong. 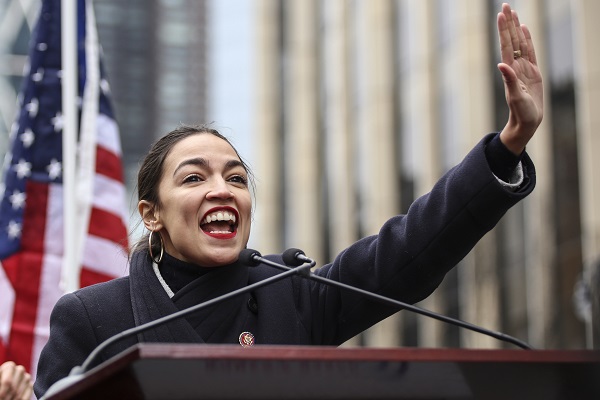