With rumors swirling about China invading Taiwan, it's worth thinking about the CCP's strengths and weaknesses.

The majority of Taiwanese don’t identify themselves as Chinese according to a 2020 Pew Research survey. This is consistent with other polls showing that people in Taiwan increasingly identify only as Taiwanese. Xi Jinping, though, doesn’t care. His political ambition to bring Taiwan into the Chinese fold is the most influential factor in China’s policy over Taiwan—but even Xi’s ambitions may be insufficient when measured against the practical realities arrayed against him.

A leaked memo from the Chinese Communist Party (CCP) in March 2022 suggested that Xi was planning an imminent attack against Taiwan. To that end, Xi instructed family members of senior CCP officials to sell all overseas assets to avoid inevitable Western sanctions. On May 24, a leaked audio clip revealed the CCP’s top brass discussing the Taiwan invasion plan. This was the first-ever recording of a Chinese military leadership gathering.

Taking advantage of Taiwan’s open society, the CCP’s military espionage activities have flourished since 2000. In the past decade, at least 21 serving or retired Taiwanese officers with the rank of captain or above have been convicted of spying for China.

According to retired Taiwanese Lt Commander Lu Li-shih, Beijing has infiltrated almost all military ranks in Taiwan. Chinese intelligence first approaches the targeted officers with lavish gifts and holidays and then offers huge payments for information. After the first few exchanges, they start blackmailing them for more information, with less payment.

With its special operations units, the PLA would kill or capture national and local leaders who command and control forces, organize resistance, and (the CCP hopes) galvanize international support. The CCP would try to prevent the rise of a Taiwanese version of Ukraine’s President Zelensky, who has held the ground in Kyiv throughout all battles.

Taiwanese defense officials have been warned about this threat. In fact, they take the danger very seriously, and their joint unit is dedicated to countering such a decapitation strike by China.

Another planned PLA tactic is a blockade before a larger air and missile campaign. It could be implemented under the guise of fleet or missile exercises, and air, maritime, or undersea incursions with civilian or paramilitary fleet deployments. With a blockade, Beijing could invade Taiwan’s sea and land areas with little warning.

In addition to its tactical planning, the latest Pentagon charts show China’s military advantage over Taiwan. In theory, to take over the island, the PLA would need at least 400,000 troops—and it claims to have over one million. Taiwan’s ground force amounts to 88,000 active-duty personnel.

Taiwan’s military has released an emergency defense manual. The 28-page handbook has a QR code that can be scanned to find the location of bomb shelters and provides safety instructions for air raids, fires, building collapses, and major power outages. The illustrated guide also includes mobilization information for military reservists.

China’s strengths, however, do not presage an automatic Chinese victory. Both sides possess long-range precision strike missiles. Both also possess significant cyberwarfare capabilities, but these would only work alongside boots on the ground troops. One factor against a Chinese invasion is the distances the PLA would have to travel to get a boots-on-the-ground attack in place during which troops would be vulnerable to attack. 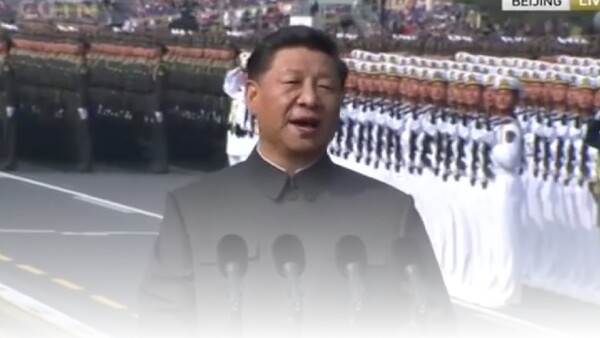 Hundreds of PLA helicopters and transport planes would be needed for a strike force that could seize key installations. It would take the PLA days to load a force so big, alerting Taiwan and its allies and allowing them to mobilize their troops and reinforce their positions.

Keeping hundreds of thousands of PLA combat troops in the middle of a battlefield, and arming and feeding them, would involve a huge supply chain. This would be very difficult in the open waters of the Taiwan Strait.

Regional defense around Taiwan is also becoming more robust. After WWII, Japan was only allowed to have a self-defense force, not a full-fledged military. This has changed with the recent Indo-Pacific summit in Tokyo. Japan is again becoming a powerful military force and is fully committed to defending Taiwan. This new alliance is Asia’s equivalent of NATO in Europe.

Divisions within CCP leadership are also weakening Xi. The CCP is preventing him from securing a third term as General Secretary (the most powerful position) at the 20th National Convention to be held this autumn. Prime Minister Li Keqiang, who has been side-lined by Xi for nearly a decade, has strong support within the CCP and is likely to replace Xi. In recent weeks, Li has become more vocal about the CCP’s discontent with Xi. Many in the party dislike his draconian domestic policies around COVID, as well as his alignment with Putin.

A big question is how America factors into all this. America’s policy on Taiwan has been inconsistent because it still officially operates under President Nixon’s agreement with China, one predicated on a “one-China” policy. The CCP believes this should bar even diplomatic relations with Taiwan.

America’s consequent “Strategic Ambiguity” could become a dilemma for deterrence. This policy may also have ramifications geopolitically and for international businesses in Taiwan. A recent Harvard publication, Taiwan: A risk analysis through the lens of Hong Kong, shows that Beijing has held global investments and businesses as hostages for China’s own financial gains.

Currently, America-Taiwan relations are perhaps the strongest in their history. President Biden has repeatedly confirmed (to the State Department’s dismay) that, if China invades Taiwan, the US will directly intervene. Officially the ambiguity remains and the State Department changed the wording of its summary of the U.S.-Taiwan relationship by removing phrases such as “Taiwan is part of China” and “The U.S. does not support Taiwan independence.”

At the same time, Congress has before it some bills aimed at solidifying U.S. support for China. The proposed Taiwan Peace Through Strength Act would greatly strengthen military support and prioritize weapons contracts with Taiwan. The Ostracize China Act would exclude China from the international financial system, including the G20 if it attacks Taiwan. The AXIS Act, if passed, holds that any collaboration between China and Russia that violates international rule would be severely sanctioned. This Act would be part of the constitutions of Europe, Japan, and other countries.

Given China’s military constraints, burgeoning regional alliances against its expansionism, China’s domestic weakness, and America’s vocal support for Taiwan, the CCP has reassessed the current world situation. Surprising at Russia’s defeat in Ukraine and the rapid strategic re-assessments made by the United States and Japan, it now appears that the CCP has put aside Xi’s plans to invade Taiwan.