The pandemic became a pretext for a politically motivated campaign against small businesses and individuals to hasten the consolidation of power in Big Business, Big Tech, and Big Government

The Real Black Swan of 2020: The Assault on Small Business – American Thinker<!—->

Most people believe the coronavirus was a Black Swan, an unexpected event of large magnitude with unprecedented consequences. But Nassim Nicholas Taleb, who coined that metaphor, disagrees. Coronaviruses were well known, though the SARS-CoV-2 strain that hit humans was new. And the pandemic wasn’t unexpected. Experts had been warning of one – though not of the coronavirus per se – for some years. In 2019, the government had even conducted months-long pandemic preparation drills. Taleb’s annoyance is at the diminution of his coinage to a cliché.

There was, however, a real Black Swan event in 2020, says Carol Roth in her book The War on Small Business: How the Government Used the Pandemic to Crush the Backbone of America. It was the U.S. government’s reaction to the 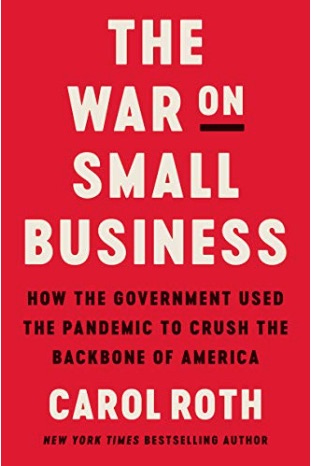 pandemic – with unprecedented decisions and a lockdown that forced people to stop working and doing business for months on end. The pandemic became a pretext for a politically motivated campaign against small businesses and individuals to hasten the consolidation of power in Big Business, Big Tech, and Big Government. That is the hook and weighty claim with which Roth begins her book.

A “recovering investment banker,” Roth has seen how Wall Street undermines Main Street by working with government through lobbyists and lawyers. Her book explores two big ideas. First, that the ills of capitalism – the concentration of immense wealth in a few individuals, for example – cannot be cured by central planning (or more government) because the real problem is the government. Second, the more the government has tried to protect us from “big, bad wolf-esque” corporations, the more powerful they have grown. This happens because central planning is all about control: a few powerful figures, reminiscent of the cliques and nomenklatura of the Soviet Union, decide on everything. Since control of the few is easier, small businesses – competitive, resolute, and representing the true, independent spirit of capitalism – must be broken.

The battle for power and control, Roth stresses, is the background against which readers should see her tour d’horizon of the impact of the pandemic response. A well-established system of cronyism – the very antithesis of testing business ideas in the market – has been bent on killing small businesses, individual rights, and ultimately, freedom. It did not waste the opportunity it saw in the “fifteen days to flatten the curve,” which dragged on to almost a year and crushed hundreds of thousands of small businesses. She says it ensured that the government declared war on small business, while doing everything to favor big business.

Roth points out several biased inconsistencies in lockdown rules. Large corporations never shuttered; in fact, they prospered during the year. The government allowed large-box retailers to remain open, while smaller stores – possibly environs of lesser infectivity – were penalized for opening. The book reports on fighters like Shelley Luther, of Dallas, TX, who went to jail for keeping her salon open, though she maintained strict safety protocols. Driven to desperation, she and her staff had decided to work. “Feeding my kids is not selfish,” she told the judge. “If you think the law is more important than getting kids fed, please go ahead with your decision but I’m not going to shut the salon.”

Through examples like Luther’s, the book raises many questions. Why should a large pet store that grooms dogs be open while nail salons were ordered shut? How could businesses that sold alcohol and marijuana be declared “essential”? Why close houses of worship (or limit the number of worshippers) when more people could gather in large grocery stores? How could left-wing, Antifa and BLM protests, where demonstrators violated masking and social-distancing rules and turned violent, be granted permission? Why did police hold back when these protestors looted, vandalized or set fire to small businesses? What began as government “helping society” became a power grab that enforced arbitrary standards.

Capitalism has been under attack for quite some time, says Roth. President Barack Obama infamously opined: “If you’ve got a business, you didn’t build that. Somebody else made that happen.” Indeed, everyone pays taxes. But the statement disingenuously refuses to acknowledge the hard work and constant innovation that goes into entrepreneurship. The free market – unlike a socialistic dictatorship or oligarchy that miserably divides up available resources – allows participants to choose their terms for production, labor and risk-taking, correcting those choices through competition, innovation, and the forces of demand and supply. Inequality in the marketplace is not necessarily a bad thing. Creative destruction – an idea formulated by Joseph Schumpeter – is part of this game, and inefficient or undesired products and businesses die away. Prices fall, quality improves. The matching up of a business owner’s self-interest with that of the consumer results in a win-win situation. Besides, the free market creates jobs and wealth.

In this, the role of a democratic government, as envisioned by our Founding Fathers, says Roth, is that of creator and enforcer of laws upholding freedom and the rights of individuals. It is not its job to become a central planner or act “in our best interests.” What has happened, though, she says, is that cronyism has steadily crept into our capitalism. Now, it’s based on relationships that place government, not the free market, in the position of choosing winners and losers. Lobbyists, ideology-driven NGOs, and influence groups financed by corporates use all means – including pious claims of diversity and social justice – to obtain favorable legislations, subsidies, policies, tax treatments and bailouts. Large corporations can pay for such influencing, so it’s not a level playing field. Politicians fill their coffers for reelection and seek post-retirement jobs, perpetuating a vicious cycle that is disrupting the efficiency of the free market.

What is happening now in the U.S. is not very different from the centralized planning of socialist disasters like the U.S.S.R., Yugoslavia and many others. In those countries, a few powerful people would decide what is to be produced, regardless of demand. They dictated how individual citizens and society should behave and what they should value. They ensured everyone’s minimal needs were met. The result was rank inefficiency, dependency, lack of oversight and checks and balances, and no incentive for people to work hard or innovate to lift themselves out of poverty.

During the pandemic shutdown, says Roth, there was an attempt to destabilize independent economic entities. Polices favored large companies and many businesses were made dependent on government handouts. Relief programs were heavily slanted towards big business, while small businesses were ordered closed, sending their customers to bigger companies. The CARES (Coronavirus Aid, Relief and Economic Security) Act, a $2.2 trillion economic stimulus bill, was based on past income, not on need.  Small businesses received less than 20% of the overall relief package even though they account for half of the economy and were disproportionately forced to shut down. Of the Paycheck Protection Program (PPP) allocation of $521 billion, 75% was garnered by the largest 13.5% applicants.

Roth’s analysis justifies her claim that the pandemic was opportunistically used. She warns Americans to wake up to cronyism and central planning – a sure route to Orwellian tyranny.