In its two most recent decisions, the Supreme Court did much more than just rule on the issues at hand.

The Return To Constitutionalism Is Hidden In Plain Sight – American Thinker<!—->

The Supreme Court has just released two monumental decisions. Predictable responses have ensued from the expected interested parties. And the widely publicized legal analysis goes something like this….

Bruen overturned New York’s century-old Sullivan Law. The Court held that the Second Amendment requires that states must allow law-abiding citizens to carry firearms, with the possible exception of courthouses and other “sensitive” locations. High population density does not make Manhattan a sensitive location. Thus, New York can ban either open or concealed carry, but not both. And New York (and DC, HI, MD, MA, NJ, etc.) cannot demand that a citizen demonstrate “proper cause.” Carrying arms is a right, not a privilege.

Dobbs overturned Roe v Wade. Basically, there is no right to abortion in the Constitution. Never was. It’s an issue for the states to handle.

Beyond these bare declarations of final conclusions lies a cornucopia of incredibly important legal foundations. And those foundations may, once and for all (near future) time, severely restrict the various federal District Courts of Appeals from twisting into pretzels to avoid the plain meaning of the Constitution. The first is a direct slap in the face of the Ninth Circus, the Amber Alert poster child for Missing Legal Reasoning.

Leftist Courts (yes, Justice Roberts, they do exist…) typically do a legal two-step dance to get to the decisions they want. First, (see McDougall v. County of Ventura) they happily admit that the particular law is contrary to the Constitution. Then, contrary to Heller, they adopt a second step that “balances” the interests of the state against the rights of the citizen. This balancing act is infinitely malleable and provides no prior standard for what the state can and cannot do. In short, it becomes a way for tyrants to “pass legal muster.” Bruen shuts this door:

Courts of Appeals have coalesced around a “two-step” framework for analyzing Second Amendment challenges that combines history with means-end scrutiny.

Today, we decline to adopt that two-part approach. In keeping with Heller, we hold that when the Second Amendment‘s plain text covers an individual’s conduct, the Constitution presumptively protects that conduct.

In plain English, if the Constitution protects a right, that’s the end of the discussion. The only thing a state can do to limit that right must be a limitation that is parallel to one that was in existence at and around the time the rate was ratified in the Constitution. Bruen notes that arms were not allowed into sensitive places like courthouses. Such isolated and carefully identified sensitive places may be similarly restricted. 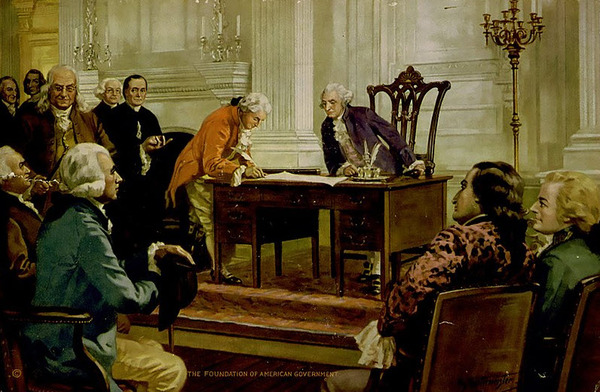 Thus Carson v. Makin gives us a hint that the Supreme Court is likely to re-establish protections for religious observance. Should another pandemic lead Governor Hair Gel to shutter churches as “non-essential,” a federal challenge should reach the conclusion that the First Amendment protects church services, and that’s the end of the process. Summary judgment for the church!

A deeper dive into the decisions sheds more light on the radical reorientation of the judicial process they represent. Beginning with Heller, the Court began a careful process of examining what the Constitution meant to the people who wrote it. It begins with simple words. “Shall not be infringed” means “shall not be infringed.”

The process then continues into the published arguments for and against the item in question. Opponents of a Bill of Rights once thought that it would limit the number of rights of the citizens. Proponents said that if there was no Bill of Rights, the citizens wouldn’t have any rights.

There was almost no historical support for major restrictions on ownership and carriage of firearms but every state outlawed abortion. And the history of both for centuries before the Bill of Rights simply reinforces these conclusions.

Working through Heller, McDonald, Bruen, and Dobbs, the Court has made it painfully clear that the Constitution must be understood as it was understood by its framers. This is called “Originalism.”

Further, because the Court denied lower courts access to a second stage of legal “balancing of interests” in evaluating the impact of a restriction on Constitutional rights, this is “Textualism.” What the text says about a right in plain language is what it says. No more, and no less. No court gets to change this.

Under Originalism, a court must research the pertinent historical documents, preferably referenced in briefs. It is not allowed to use secondary sources that support a preferred conclusion as the Left wing of SCOTUS does. In both Bruen and Dobbs, their dissents demonstrate a view long on policy verbiage but devoid of substantive legal analysis. Courts won’t be allowed to do this anymore. They must be courts of law, not another legislature. We cannot allow the words to change in meaning over time. The “Living Constitution” approach is over.

I’m sure some lower courts will continue to ply their trade, and SCOTUS can’t review every decision. But the cases that do get reviewed will be judged by their fidelity to the law as enacted. Courts will not be allowed to be policy bodies. That role is reserved for the legislature.

Bruen and Dobbs are monumental victories for freedom and federalism. Anyone who attempts to minimize that is missing something.

But they are also monumental victories for the fundamental rule of law. Any law that changes in meaning is no law at all. It’s an excuse for courts to legislate, and the Constitution does not allow that. Any changes to the Constitution must follow the approach found in Article V, and that’s designed to be very difficult.

The Left wants to sidestep the law in its rush for power. We see that mindset on daily display from virtually every Democrat near a microphone. SCOTUS has begun to step on the brakes of that runaway train. The Justices who stood up to protect America owe their majority to Donald Trump. The rest of us should say a very loud, “Thank you.”