On August 20, 2020 Joe Biden accepted the Democrat party's nomination for president by fatuously declaring, “Character and decency are on the ballot.”

A claim which is an unfathomable stretch of the imagination, considering Joe Biden’s long and well-known history of 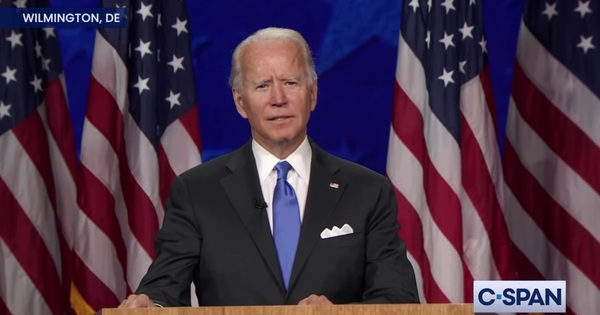 corruption and his uncontrollable penchant for being a serial fabulist and compulsive liar. To run on this platform required not only unbridled audacity but also lockstep conformity in the regime media’s coverage of Biden but also a requisite redefinition of character and decency by the entirety of the ruling class.

Wallowing in their ever-growing abandonment of integrity, the regime media and the rest of the ruling elites were well aware of Biden’s history of duplicity and dishonesty as well as his current mental deficiencies.  Nonetheless, they rallied around a common cause and swung into action by transforming corruption into propriety, mendacity into guilelessness and arrogance into humility.  Thus, “Lunch Bucket Joe” was the epitome of “character and decency” who would single-handedly restore America.

It was not only the Democrat elites in lockstep with this deception and mythical mantra but virtually everyone in the Republican wing of the ruling class as well, including media figures such as Bill Kristol and George Will and their compatriot and fellow neo-conservative at The New York Times, David Brooks.

In August of 2019, Brooks in an interview about Joe Biden’s obvious mental decline and penchant for fabrication, claimed that Joe “is not mendacious, he is not irresponsible.  He may embellish a story to improve its dramatic effect.  Our memories are just more fallible than we think.”

Brooks was so moved by Biden’s cliché-riddled inauguration speech that he was brought to tears over the transfer of power saying “There are good people [Biden] there, standing there talking, they’re wanting to run this country well.”   A few days later he penned an unbelievably fawning op-ed in The New York Times that could have been written by Jill Biden claiming: “The Biden values are there: humility, vulnerability, compassion, resilience, interdependence, solidarity.”

This is the same David Brooks who in 2015 published a self-serving book titled: The Road to Character, wherein he claimed character starts with having a certain set of universal traits that include a code of ethics — an inner knowledge of what is fair and just.  Further, character begins with and flourishes when “we move beyond our own self-interest and act for the greater good, whether it’s for the good of our family, our community, our workplace or our country.” [Emphasis added]

What happened to the David Brooks who wrote those sentiments and his fellow travelers in the ruling class?  They fawned over his book while enthusiastically nodding in agreement.  They pride themselves on attending seminars on the significance of character and wax endlessly about the importance of electing virtuous leaders.

Apparently, much of this is for public consumption.  In reality these elitists believe that they are not only the fountainhead but the arbiters of “character” as, not coincidentally, those they deem to be of character are invariably the “noble,” wealthy, and “higher ups.”  In other words, their fellow elitists. They consider character as malleable as long as it accommodates their avarice and desire for societal control.  Don’t the ruling elites have enough privileges without claiming good character for themselves?

It was this elitist mindset that allowed virtually the entirety of ruling class to ignore the long-term welfare of the country as they determined that it was in their best interest to unabashedly promote the most corrupt, senescent, and inept presidential nominee in American history.  The need to eliminate the threat to their financial and societal hegemony, Donald Trump and the MAGA movement, was far more important.

Wallowing in this egocentric mindset, these same myopic buffoons knew there was a high probability that the radical left would control the Biden administration due to Joe Biden’s mental incapacity and willingness to do or say anything as well as being, due to his decades of venality, an easy mark for domestic and foreign extortion.  Nonetheless, they chose to continue their self-serving deification of Joe Biden.

That probability is now reality as the Biden Administration has unabashedly promoted the entirety of the radical left’s socialist/Marxist agenda including unfettered illegal immigration, de facto infanticide, and the mainstreaming of gender dysphoria.  Further, Biden has refused to condemn or prosecute their militant tactics whenever they choose to physically confront and intimidate judges, members of Congress, corporations or the average citizen.

This mindset also played a major role in the ruling elite’s justification for covering-up the damning contents of Hunter Biden’s laptop, the casting of the protests on January 6, 2021 as an “insurrection,” initiating as well as participating in unprecedented vote manipulation in 2020, and unabashedly claiming the 2020 election was honest and devoid of fraud.

Perhaps the most significant end-product of this mindset is the abject disdain for the non-elitist segment of the American citizenry, the vast majority of whom are endowed with considerably more sagacity and integrity than virtually any member of the current ruling class.

Perhaps no one has better captured their hypocrisy and duplicity than Joseph Heller in his ground-breaking novel Catch-22 when he wrote:

It was miraculous.  It was almost no trick at all, he saw, to turn vice into virtue and slander into truth, impotence into abstinence, arrogance into humility, plunder into philanthropy, thievery into honor, blasphemy into wisdom, brutality into patriotism and sadism into justice.  Anybody could do it; it required no brains at all.  It merely required no character.

By inflicting Joe Biden upon the nation, the treachery, hypocrisy, avarice and maleducation of the ruling elites has been exposed despite their concocted and narcissistic claim that they are the embodiment and final arbiter of character.

Thanks to their insufferable hubris, the bulk of the American people know who is solely responsible for the ongoing economic chaos and societal upheaval in the United States as well as much of the turmoil throughout the world.

Panic is thus setting in at the enclaves of the ruling class as they know their days atop the pyramid that is American society are coming to an end.