MAGA and America First need warriors and leaders who are not afraid.

Tucker, President Trump, and Governor Ron DeSantis are the three — the troika of leadership for the MAGA and America First movement.

You can tell that this is true by the way the enemies of MAGA and America First — the Progressives, the globalists, the Deep State — have already begun to fire on these three warriors.  The Patriot movement loves Tucker, Trump, and DeSantis because of the enemies they have made.

Mitch McConnell, Kevin McCarthy, Liz Cheney, Adam Kinzinger, Lindsey Graham, Mitt Romney — these people will be in no way the future leaders of the Republican Party.  The base and grassroots of the party will not accept their leadership or adhere to their motivations.  They are done.  Over.

MAGA and America First need warriors and leaders who are not afraid and who do not get cowed by the BLM and Antifa mobs.  In this battle for the soul of America’s future, in these foxholes of our culture wars, most Republicans want to be fighting with a real fighter, a true believer of the cause, who does not flinch.  And that is Tucker, Trump, and DeSantis.  That is why Tucker, Trump, and DeSantis are the leaders in 2022 and 2024.

Tucker says what Patriots are thinking and feeling.  Tucker wonders about what conservatives are wondering about.  Tucker appears to embody some of the best characteristics of Reagan, Jefferson, and C.S. Lewis.  In some ways, Tucker is the linguist for Trump’s tweets.

Of all the media, Tucker and Tucker alone appears to be willing to take on all the sacred cows of the Deep State, the media left, and Big Tech.  From the Russia-Ukraine war to COVID to transgenderism and CRT in public schools to the 2020 election…Tucker takes on all of them and more.

Many wonder how Tucker is still alive.  How has he not committed suicide with three bullets to the back of the head?  How has pornography not mysteriously shown up on his laptop?  Without question, Tucker is in the sights of the surveillance Deep State communities, yet he does not flinch.

Tucker’s  fight is the conservative fight.  Tucker’s battles are MAGA battles.  And MAGA nation and America First movement will follow him.  We know we can trust Tucker to be uncompromising in the fight for America’s future.  He will not be canceled.

Trump.  President Trump won the election in 2016.  And most Republicans truly believe he won the election of 2020.  A great deal of Democrats believe that also.  More and more evidence appears to be coming out to support this fact.  That is why Progressives  are trying to make it illegal for Trump to run again in 2024.

Much like when Andrew Jackson was cheated out of the presidency in the 1800s, Trump, like Jackson, is coming back with a vengeance.  And his supporters, like Jackson’s, marvel at it.  MAGA nation and the America First movement want Trump back as the presidential nominee in 2024 and will fight to get him back in the White House.

Just recently, Trump’s endorsements won in all of the 22 Republican primaries he endorsed.  Obviously, President Trump is the leader of the Republican party, and his nomination is assured if he wants it.

As more and more evidence is coming out about the Election of 2020, Trump becomes more and more popular among Republican voters.  From Mollie Hemingway’s Rigged to True the Vote to Dinesh D’Souza’s recently released 2000 Mules, Americans are beginning to feel that election fraud in 2020 was not just a theory, but a fact.  And they’re mad as hell about their votes not counting.  Trump is the tip of the spear of this anger.

Trump hits all the right notes in leading MAGA and America First in the 2022 midterms as well as the 2024 presidential election.  Trump is the author and originator of MAGA and America First.  And it appears that Trump’s Supreme Court nominations will overturn Roe v. Wade.  He gets all the credit for this remarkable achievement.

DeSantis.  Should Donald Trump decide not to run for the GOP nomination in 2024, Governor Ron DeSantis would be next up.  DeSantis is the heir apparent for the Patriots — the nation’s leading governor in America, who represents all things MAGA and all things America First.

Conservatives love DeSantis because he is a warrior.  He not only fights, but wins.  DeSantis is almost always victorious in the State of Florida’s issues as well as fighting  against Biden’s regime.

No other governor in America has fought so well and won so often as DeSantis against the Deep State’s CDC.  DeSantis does not allow himself to be intimated or canceled against the BLM and Antifa woke mobs.  Conservatives love his bravery.  He put on a civics lesson in his battle against what was at one time thought to be the untouchable Disney.  And he just recently signed into law a 1.2-billion-dollar tax cut for all Floridians.

DeSantis has turned the “purple” state of Florida into a bright red state, and his re-election is all but in the bag.  DeSantis is hitting on all the right notes in fighting for Florida, fighting for MAGA and America First, and making sure in the 2024 election that Florida stays red.  Patriots trust DeSantis; their fight is his fight.

With the midterm elections of 2022 in just a few months, Tucker, Trump, and DeSantis will be crucial for the Patriots and GOP winning back the House and the Senate.  As long as the midterms are not stolen, as long as there is election integrity in the key “purple” congressional districts and “purple” states, it could be a landslide for MAGA and America First.

One must remember, Progressives go by Stalin’s old adage,  “I don’t care who votes; I care only who counts the votes.”  Look for the enemies of MAGA and America First to do everything they can to destroy this troika of leadership.  You know that Tucker, Trump, and DeSantis are “over the target” the way their enemies ruthlessly attack them.

Come to think of it, a Trump-DeSantis GOP ticket sure sounds strong and victorious.  Add Tucker in the position of chief of staff or press secretary, and it sounds even better.  Then put Ted Cruz in as attorney general, or put him on the Supreme Court.  Next, add Rand Paul as either CDC director or secretary of defense, and then those Deep State elitists will lose their minds.  Yeah…let’s do that. 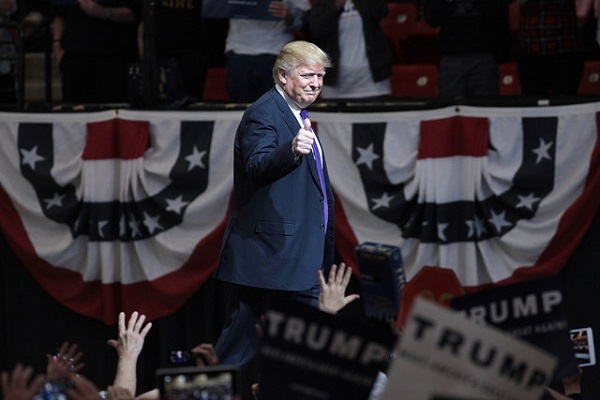