With America at risk from both China's bid for global dominance and Russia's aggression in Ukraine, leftist political “idealism” is very dangerous.

As our country deals with the foreign policy challenges of China’s bid for global dominance and Russia’s aggression in Ukraine, it could use a dose of the mature realism of Walter Lippmann, who was, at one time, the country’s most influential journalist.

Following his idealist period—writing at The New Republic and advising the Wilson administration during and after the First World War—Lippmann matured after observing international relations between the world wars. His eventual hardheaded realpolitik was most evident in his two World War II books, U.S. Foreign Policy: Shield of the Republic (1943) and U.S. War Aims (1944), and his magnificent postwar book, The Cold War (1947).

In U.S. Foreign Policy: Shield of the Republic, Lippmann explained the “controlling principle” of foreign policy: Bringing a nation’s commitments and power into balance; that is, maintaining “its objectives and its power in equilibrium,” assuring that the country’s means are equal to its purposes. “The constant preoccupation of the true statesman,” he wrote, “is to achieve and maintain this balance.”

Lippmann surveyed the evolution of American foreign policy over the 19th century and into the 20th. With specific regard to his “controlling principle” doctrine, Lippmann observed that the Monroe Doctrine committed the nation to preventing new colonization by outside powers in the Western Hemisphere, even though the United States initially lacked the power to enforce it. However, because America’s and Great Britain’s interests here coincided, British sea power enforced the Monroe Doctrine. After the Spanish-American War, the U.S. acquired the Philippines and Guam, and, having previously annexed Hawaii, became an Asian and Pacific power.

Teddy Roosevelt and strategists like Alfred Thayer Mahan recognized that our interests required a stronger navy and a canal on the Central American isthmus—balancing resources with commitments. And Lippmann, after previously justifying American involvement in World War I in Wilsonian terms, now contended that the war was not fought to make the world safe for democracy or to create a League of Nations. It was fought because America’s security depended on having “friendly and strong partners” on Europe’s and Asia’s shores.

In the 1930s, Lippmann argued, the gap between our commitments and power dangerously widened. “Eventually, there is a reckoning for nations…who have obligations that are not covered by their resources.”

FDR, though he understood what needed to be done to protect U.S. interests during the mid-to-late 1930s, refused to take political risks to close the gap between commitments and resources. That political cowardice meant we were unprepared when war came. Our statesmen clung to the ideals of peace and disarmament while Germany, Japan, Italy, and the Soviet Union armed and sought to expand their power.

For Lippmann, the true purpose of a nation’s foreign policy is “to provide for the security of the nation in peace and in war.” The nation’s “vital interests” must be explained to the American people and “safeguarded so that they can be defended successfully in case of war.” He ridiculed disarmament movements that lose sight of the need to protect vital interests and defined vital interests as “those interests which the people of the nation are agreed they must defend at the risk of their lives.”

The United States’ strategic defenses, wrote Lippmann, “extend across both oceans and to all the trans-oceanic lands from which an attack by sea or by air can be launched.” They extended, in other words, to the coasts of Europe, Africa, and Asia. He explained that the power potential of the Old World (Eurasia-Africa) in terms of population and resources was (and is) greater than that of the New World (the Americas).

America needed to “form[] dependable alliances in the Old World.” America’s security, Lippmann wrote, depended on a balance of power in the Old World—a balance that prevented a Eurasian power from becoming “capable of aggression outside of the [Eurasian] continent.” But American statesmen must also appreciate the limits of power, Lippmann wrote and, by balancing commitments with power be able to (quoting George Washington) “choose peace or war, as our interest, guided by justice, shall counsel.” 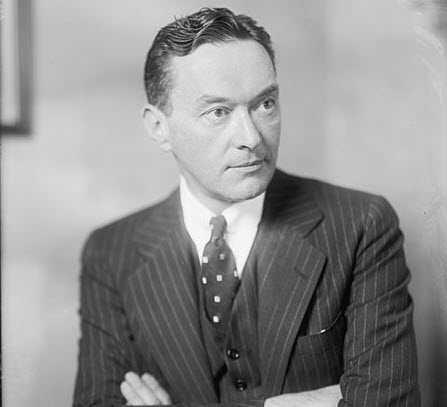 As the Allies began to win WWII, Lippmann wrote U.S. War Aims, in which he recognized that the postwar world would be divided into spheres of influence between the Western powers and the Soviet Union. He abandoned all Wilsonian notions of “self-determination” of peoples and embraced geopolitical realism as prudent foreign policy. Lippmann’s biographer, Ronald Steel, explained that Lippmann

now had worked out a consistent diplomacy based on military power, alliances, spheres of influence, and a ‘cold calculation’ of national interests.” Steel sensed in Lippmann’s worldview a combination of Mahan’s sea power theories, Nicholas Spykman’s geopolitics, and Clausewitz’s conception of war as politics by violent means.

Lippmann’s realism blossomed in his next book The Cold War, which collected critical essays he wrote about George F. Kennan’s famous and influential 1947 article “The Sources of Soviet Conduct,” explaining his vision of the policy of containment.

Lippmann called Kennan’s concept of containment a “strategic monstrosity.” First, it was overly optimistic that Soviet power would eventually “decay” on its own. This was, Lippmann wrote, “wishful thinking” and “hoping for the best,” which is not a sound basis for foreign policy. Second, Kennan’s proposed policy ceded the initiative to the Soviets, while we were to react and respond to their initiatives. American military power and diplomacy, Lippmann wrote, “should be used to redress the balance of power which has been upset by the war.” It is not designed, he continued, to a “strategy of containing, waiting, countering, blocking, with no more specific objective than the eventual ‘frustration’ of the opponent.”

Third, the United States lacked sufficient resources to maintain by itself a defensive perimeter along the Soviet borderlands in Europe and Asia. That would require allies all along the Soviet periphery, and such allies or client states, Lippmann suggested, would not be reliable and would be disorganized, disunited, and feeble. Supporting those allies would come at an “incalculable cost.” It would also unnecessarily disperse our forces.

American foreign policy, Lippmann wrote, should be based on “the realities of the balance of power” in Europe and Asia. Kennan’s concept of containment, Lippmann wrote, like the Truman Doctrine, would mean in practice “an unending intervention in all the countries that are supposed to ‘contain’ the Soviet Union.” We should not be embarking on an “ideological crusade” to make “Jeffersonian democrats” of the peoples of Eastern Europe, the Middle East, and Asia. And the ultimate aim of our policy should be European “self-sufficiency.”

Finally, Lippmann argued against America becoming involved and “entangled all over the world in disputes that we alone cannot settle.” There are places—e.g., China—where he believed we lacked the power, the means, the knowledge, and the influence to control events. Kennan’s concept and the Truman Doctrine, he repeated, would entangle the United States in “destructive and exhausting” commitments.

The optimal outcome of our foreign policy, Lippmann wrote, would be for the American and Soviet armies to “evacuate Europe,” with Europe organizing its own defense against possible Soviet aggression.

Lippmann later became a fierce critic of U.S. policy in Southeast Asia, not on moral grounds, but based on his notion of balancing interests, commitments, and resources. Vietnam, he said, was not a vital interest of the United States. We are not, he wrote, “a global fire department appointed to stop communism everywhere.” Lippmann supported Nixon’s plan to withdraw from Vietnam while negotiating “peace with honor.”

Today, our leaders have recognized that the U.S. must “pivot” or “rebalance” to the Indo-Pacific region but, to date, the pivot has been more rhetoric than reality. The Ukraine war has stalled the pivot as we pour resources into Eastern Europe.

Meanwhile, China marches on with its Belt and Road Initiative—a geopolitical advance masquerading as infrastructure development throughout Eurasia and Africa. Lippmann would recognize that Russia’s aggression in Ukraine does not affect a vital U.S. interest, whereas China is seeking to replace the United States as the world’s leading economic and military power.

A Russian victory in Ukraine would not change the overall balance of power in Europe. A Chinese victory over Taiwan (and the U.S.) in the South China Sea, however, would upset the Indo-Pacific balance of power. Our limited resources should be directed there, not to a region long recognized as Russia’s sphere of influence.

As Ronald Steel wrote, for Lippmann—the mature realist Lippmann—foreign policy was not about morality; it was about geopolitics. And it is geopolitics, not high-sounding, emotional appeals, that should guide our foreign policy.