Have conservatives ever been hated harder than they are now?

The Ugliest Form of Antagonism…and It’s for You – American Thinker<!—->

Roger Scruton was a British philosopher who spent his life defending conservative values.  Sir Roger, as he was after his knighthood in 2016, saw the antagonist culture as a rejection of inherited values, including gender distinctions, capitalism, patriotism, religious faith, and everyday morality such as honesty and prohibitions against theft, adultery, and other evils.

No one understood antagonism better, on a theoretical level, than Scruton, and he wrote with passion and clarity.  For anyone wishing to understand the culture of antagonism, Scruton’s books, including The Meaning of Conservatism, The Aesthetics of Music, and How to Be a Conservative, are a good place to start.

But even Scruton did not understand the full force of antagonist culture because, in truth, he did not live to see just how destructive it could be.  He did not see rules enforced against the use of gendered pronouns and applied to children as young as three.  He did not see the teaching of CRT and other forms of minority-supremacist ideology take the place of actual learning in schools.  He did not see the refusal to work on the part of millions, and the subsequent collapse of the supply chain.  He did not witness mobs swarming luxury stores and hauling off bags of expensive goods.

Scruton had a profound understanding of the history, nature, and damaging effects of the culture of antagonism, but he cannot have felt or witnessed its destructive nature, other than in the vicious bias he himself faced as an academic.  That damage was softened somewhat by the popularity of his books and the fame and wealth that his writing brought him.  He had the last laugh over those small minds in academe.  His alliance with Prince Charles in the defense of traditional architecture was only one of many contacts that opened up as a result of his principled conservatism.

But now we understand the effects of the culture of antagonism as Scruton could not have.  The antagonists are now in charge of the Democrat party in America; they are controlling policy at the Biden administration; they are everywhere in schools, colleges, and universities; they still control much of the courts and legal thinking in America, despite the enormous contribution of President Trump in appointing three Supreme Court justices and hundreds of federal judges; and in all areas they are determined to press their fiery nihilism to its destructive end, inciting a revolutionary crisis intended to sweep away constitutional democracy and replace it with a totalitarian State.

Now we see the full destructive force of antagonist culture.  We begin to feel what it is like to live without freedom of speech, association, and other basic rights.  We now understand the effects of the destruction of gender distinctions, and we see how the teaching of CRT can divide society and turn the young against their history and traditions.  We see the breakdown of law and order as gangs of young thugs pillage stores and attack helpless citizens stripped of police protection by “defund the police” movements.  We see elderly persons on their way to church beaten and killed by those who kill for pleasure.

And to all of this, the American left, infected by the culture of antagonism, is callously indifferent.

Scruton understood the culture of antagonism as no one had before, but he lived largely apart on a comfortable rural estate — as ordinary citizens in Britain or America cannot.

But for us in America, and in much of the West, there is no refuge from the antagonist culture.  It is the mission of the Biden administration and Biden’s leftist allies in Congress to force it down our throats.  For the left, it is no longer acceptable to allow traditionalists to go their own way and practice their own beliefs.  Those beliefs are under savage attack; our faith and liberty are being stripped away.

As Biden says, our children do not belong to us “when they’re in the classroom.”  If you own a business, Obama says, “You didn’t build that,” and so it can and must be taxed away.  Your country is not “exceptional,” proclaims Obama — all countries are, and so your country deserves to be taken down a notch or three.  If you are white, and especially a white male heterosexual, you are inherently guilty of racism and privilege and must at all times pay obeisance and make apologies and amends and reparations to those who have suffered repression (even though those “repressed”  minorities have benefited from affirmative action for a half-century).  And if you believe in God, you must remain silent about it or be punished with loss of employment, lawsuits, and even the threat of imprisonment.

And this is only the beginning. Once the antagonists have gained permanent power, all of these rules will be codified into law, and these laws will be enforced everywhere.  Neighbors will be enlisted to spy on neighbors, children on parents.  Even the hint of conservatism on social media will be investigated and repressed and punished — and links immediately shut down, as is happening already.  There will be re-education camps set up in isolated locales so that the methods of “re-education” are not observed.  Those martyrs who still refuse to surrender their faith will waste away without food, shelter, or protection from Brownshirt mobs employed by government-funded NGOs to police the antagonist ideology.

This is not an Orwellian “vision of the future.”  It is the present in many respects, with more than three million illegal aliens entering in 2022, with children indoctrinated from infancy, and with “misinformation boards” headed by hardcore ideologues.  All of these policies are cheered on by the left, while the conservative majority that actually exists in America remains largely silent.  It’s time to be loud.

Many commentators predict an overwhelming victory for conservatives in November, and I hope it happens, but we must go beyond that.  It’s time to understand how pervasive the antagonist culture is and to oppose it at every point.  We can no longer accept the dominance of radical viewpoints in the media, politics, or education.  We are conservatives, and we will practice our beliefs in public without interference or questioning.  And we will speak out against anyone who tries to curtail our liberties. 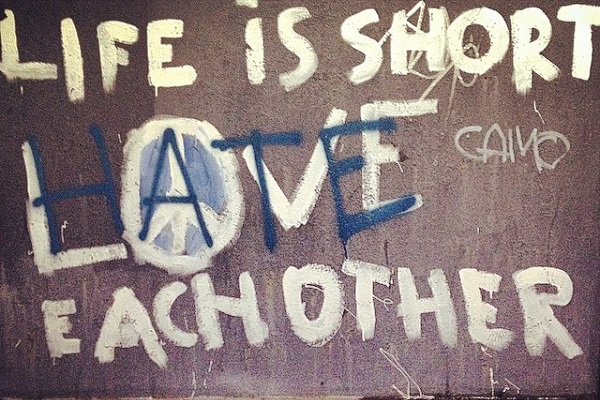