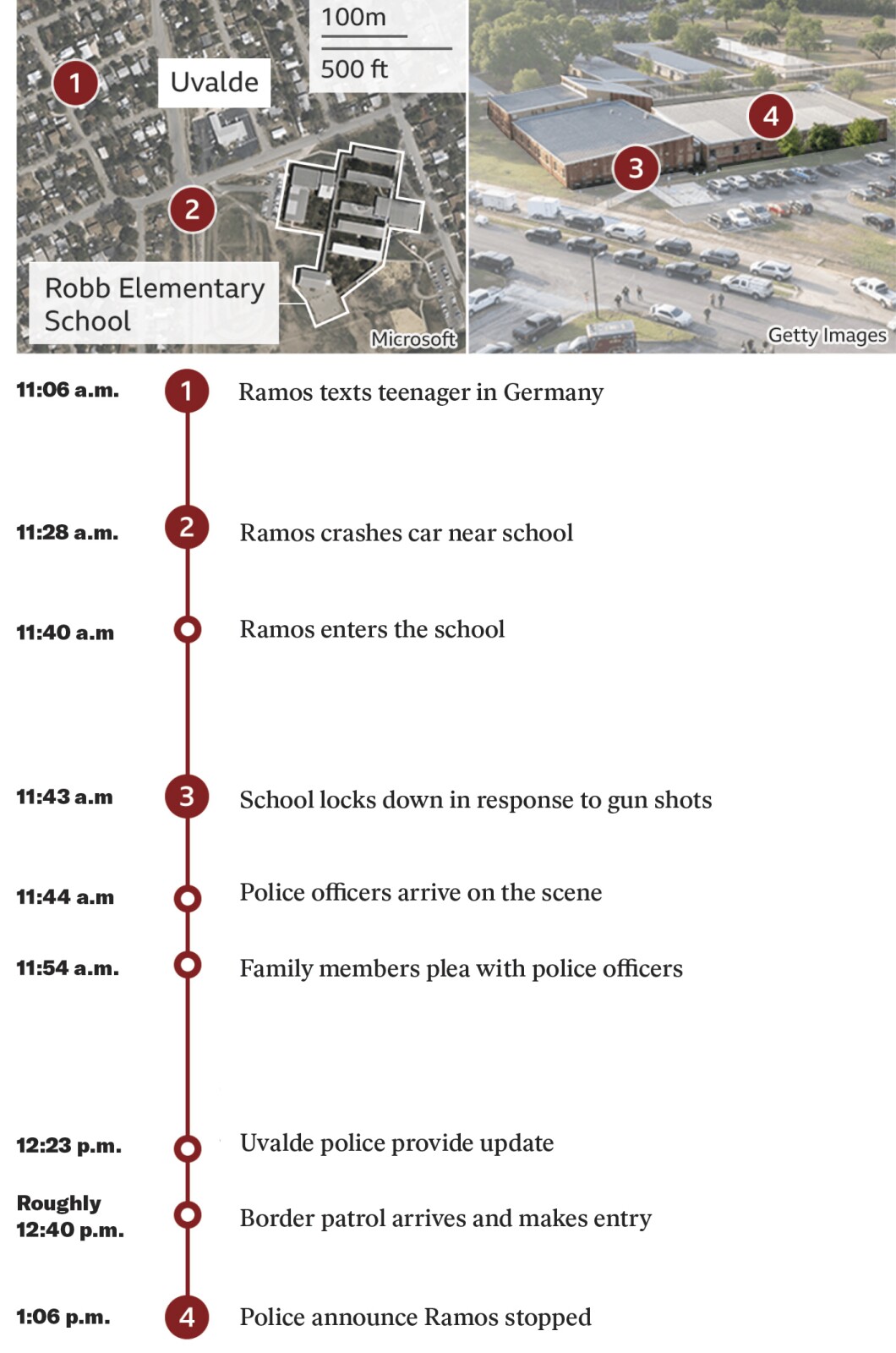 A timeline of the tragic 90 minutes during which two dozen lives were claimed is emerging as investigators scramble to piece together the sequence of events during the assailant's slaughter at Robb Elementary School on Tuesday.

A timeline of the tragic 90 minutes during which two dozen lives were claimed is emerging as investigators scramble to piece together the sequence of events during the assailant’s slaughter at Robb Elementary School on Tuesday.

The following timeline, which represents officials’ best estimates as to the timing of events that led to the deaths of 19 schoolchildren and two teachers, is presented in local time.

‘THEY COULD HAVE BEEN SHOT’: TEXAS OFFICIAL EXPLAINS POLICE HESITATION TO PURSUE SCHOOL SHOOTER

March 20
Suspect Salvador Rolando Ramos moved in with his grandmother on March 20, Steve McCraw, director of the Texas Department of Public Safety, said at a press conference Wednesday.

May 17
A day after turning 18, Ramos bought a semi-automatic rifle, McCraw said. On May 18, he purchased roughly 375 rounds of ammunition for that gun, per McCraw.

May 20
The suspect purchased a second semi-automatic rifle, according to McCraw. Both guns were purchased at the Oasis Outback, a local hunting and fishing store.

11:06 a.m. Suspect texts teenager in Germany
The morning of the shooting, Ramos had a text message exchange with a 15-year-old girl in Germany, according to CNN. He said he was angry at his grandmother, who was apparently feuding with him over his phone.

“I just shot my grandmother in her head,” he wrote at 11:21 a.m. and then added, “I’m gonna go shoot up an elementary school rn,” according to the text messages.

The 15-year-old began texting with Ramos on May 9 and did not respond to his texts until after news of the shooting broke, the outlet reported.

At some point Tuesday morning, before entering school grounds, a 66-year-old woman called police claiming her grandson shot her, according to Gov. Greg Abbott. The exact time of the call is not clear.

His grandmother, who was shot in the face, is expected to survive, a woman believed to be Ramos’s mother told the Washington Post. After shooting her, Ramos allegedly got behind the wheel of her gray Ford truck and headed toward the school.

11:28 a.m. Suspect crashes car near the school
Ramos crashed his Ford truck into a ditch near the elementary school, according to officials. Following the crash, he started shooting at people at a nearby funeral home, prompting a call to police at 11:30 a.m., Victor Escalon, a regional director for the Texas Department of Public Safety, said during a press conference Thursday. He directed fire toward at least two people and continued shelling near the school as he paraded through the parking lot, Escalon added.

11:40 a.m. Suspect enters the school
After lingering around the outskirts of the school building for roughly 12 minutes following the car crash, Ramos entered the building unimpeded. He was not confronted when he breached the building despite initial reports to the contrary, Escalon emphasized.

11:43 a.m. School locks down in response to gunshots
About three minutes after the gunman entered the building, the school announced a lockdown on its Facebook page “due to gunshots in the area.” School officers assured parents, “The students and staff are safe in the building. The building is secure in a Lockdown Status.”

11:44 a.m. Officers arrive on the scene
Officers arrived at the school and entered the building four minutes after Ramos, according to Escalon. They heard gunfire and saw some of the suspect’s movements inside the school. Ramos then barricaded himself into a fourth-grade classroom and began shelling, fatally striking 21 people, including 19 children and two teachers, officials said.

Officers did not immediately enter the classroom because they were receiving gunfire, Escalon explained. They called for backup, and law enforcement moved to evacuate other teachers and students from the school.

12:03 p.m. Student calls 911
An unidentified person in room 112 called 911 first at 12:03 p.m. and then again about seven minutes later, explaining that multiple people were dead, McCraw said at a press conference Friday. She also made calls at 12:13 p.m. and 12:16 p.m. to report that between eight and nine students were still alive.

12:19 p.m. Another call is made
A call from an unidentified person in room 111 was made, but she hung up after being told to do so by another student, McCraw said, noting that two minutes later, dispatchers heard shots being fired over a 911 call. He did not clarify which call.

12:23 p.m. Uvalde police provide an update
Authorities informed parents that students were being moved to the Willie de Leon Civic Center for pickup and noted that the situation at the school was active in a Facebook post.

Roughly 12:40 p.m. Border Patrol arrives and makes entry
Sometime around 12:40 p.m., Border Patrol agents and other tactical teams arrived on site, entered the building, and went after the gunman, per Escalon.

12:50 p.m. Shots fired
Shots could be heard over the 911 call police had with an unidentified caller. A minute later, loud noises were heard, and it appeared officers had moved children out of the room, per McCraw. The first child who called was cut off around that time, McCraw said.

1:06 p.m. Police announce Ramos apprehended
“Update @ 1:06 Shooter is in Police Custody,” Uvalde police wrote on Facebook. It was later revealed that he was fatally shot by responding officers.

It is important to note that some accounts from law enforcement about how the storming of the school unfolded have evolved during the past week. The biggest adjustment has been erroneous reports from officials that an officer stationed at the school exchanged gunfire with the assailant, which Escalon corrected on Thursday.