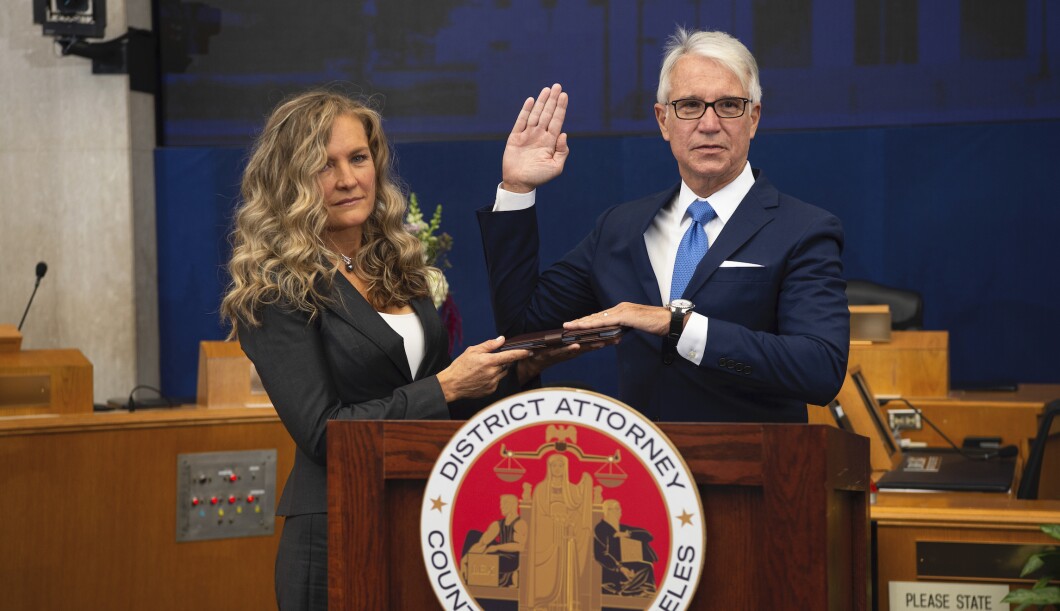 EXCLUSIVE - It’s been three months since District Attorney George Gascon beat a bipartisan recall effort in Los Angeles, but for several dozen volunteers, the election is far from over.

EXCLUSIVE – It’s been three months since District Attorney George Gascon beat a bipartisan recall effort in Los Angeles, but for several dozen volunteers, the election is far from over.

Three days a week, they enter an office at the Los Angeles County Registrar-Recorder office to begin a tedious six-hour stint poring over records bearing the names and addresses of voters who wanted to remove the beleaguered prosecutor from office.

They are hunting for evidence showing that the county was incorrect in throwing out 195,783 petitions that doomed the chances of electing a new district attorney. And they are making history.

“Not only is it the largest recall [the registrar’s office] has ever examined, they have never been challenged like this before, and they don’t like it,” said Marian Thompson, an attorney with the recall campaign. “They admitted in their [court] papers that previous inspections … lasted a few days, and folks went on their merry way.”

“Many of us are former prosecutors. We leave no stones unturned in the pursuit of justice,” she said.

Volunteers have been thrown into a type of time warp, conducting their inspection with pens and paper and forbidden from accessing electronic devices other than limited information on a county computer screen. It will take almost two years to go through the records, they say, and by that time, Gascon could be voted out of office during the 2024 general election.

“We have stepped into a time machine and working inside 1970 in the registrar’s office,” said Tim Lineberger, spokesman for the campaign to recall Gascon. “We have volunteer attorneys in there, putting in their own time, some are taking off work. It’s a grueling process, can you imagine doing this for more than 18 months?”

The campaign is hoping Dec. 6 will give some relief — that’s the day they go into court and ask a judge to force Registrar Dean Logan to increase computerized record access along with the number of days and volunteers allowed into the building.

So far the two sides are miles apart, with the county calling the campaign efforts “unprecedented and dangerous.”

“What is dangerous is when you have a terribly inept, recklessly incompetent registrar who probably has done just about everything that could be done to frustrate a legitimate and successful recall effort,” said former District Attorney Steve Cooley, one of the campaign organizers. “I am now of the opinion that a civil grand jury should investigate the registrar’s office for their miserable handling of the recall effort.”

County attorneys say the campaign has no legal right to view a voter profile, which contains prior addresses along with either a driver’s license number or the last four digits of a Social Security number.

“The Legislature has made clear that the disclosure of petition and voter registration information must be limited in order to protect the legitimate privacy interests of voters,” the county wrote in a court brief.

The search for proof

The campaign says thousands of petitions were wrongfully tossed out — enough to recall Gascon. They need to overturn 46,807 signatures marked invalid, and so far, volunteers claim to have proof of thousands of errors after surveying a fraction of the petitions.

“One of the things Logan promised us in writing is we would have access to the same info the examiners had when they disqualified the signatures,” Thompson said.

But that hasn’t happened. Instead, workers are faced with a logjam intended to frustrate the campaign into giving up. Or worse, if ineptitude is proven, it will be so far into the future that it wouldn’t matter, Cooley said.

“Death by a thousand cuts, a slow death in darkness — that appears to be their goal,” Cooley told the Washington Examiner. “Our only salvation is in a court of law.”

As volunteers take their stations, they see a sea of empty desks with computers and wonder why those are not opened up to the campaign to expedite the process.

The county said in a court brief that officials are doing the best they can in a difficult situation. Employees must monitor the volunteers, and the registrar’s office is short-staffed. Training temporary workers takes three to five days “to fully familiarize with the signature review process pursuant to the Registrar’s procedures,” a county court brief said.

“Most of the permanent staff have been working 10 to 12 hour days since July 6, 2022 and will require vacation time in December,” the brief said.

“Ms. Thompson’s personal knowledge of the workload issues of or staff resources available in the Registrar’s office — but on speculation,” another court filing said.

Petitions were thrown out for a variety of reasons, each requiring a different type of fact-finding mission.

The three biggest reasons were signatures that didn’t match the registrar’s file, voters who listed a wrong address, and voters who signed multiple petitions.

Volunteers said that signatures can change over time and have asked for all previous signatures on file in order to examine the signatures adequately. They have been provided with only the most recent signature, viewable on the computer screen. If the signature appears to differ only slightly, greater weight is supposed to be given to accepting it, attorneys said.

For addresses, the campaign said it’s essential to look at prior residences because voters could have moved and not updated their records. This has been denied.

And if voters signed more than one petition, all duplicates must be thrown out. The campaign said it has found instances in which every single petition was invalidated.

All notes are handwritten on pads of paper, which must then be transcribed at a later day.

Campaign officials said they received no training on the computer system and have had to figure it out themselves. Logan has rebuffed efforts to provide even training manuals, they said.

“It would be fair to characterize their conduct as slow-walking and stonewalling based upon what works to their best advantage to beat the recall and avoid the huge embarrassment that they would suffer,” Cooley said.

The registrar recorder’s office did not return a request for comment.