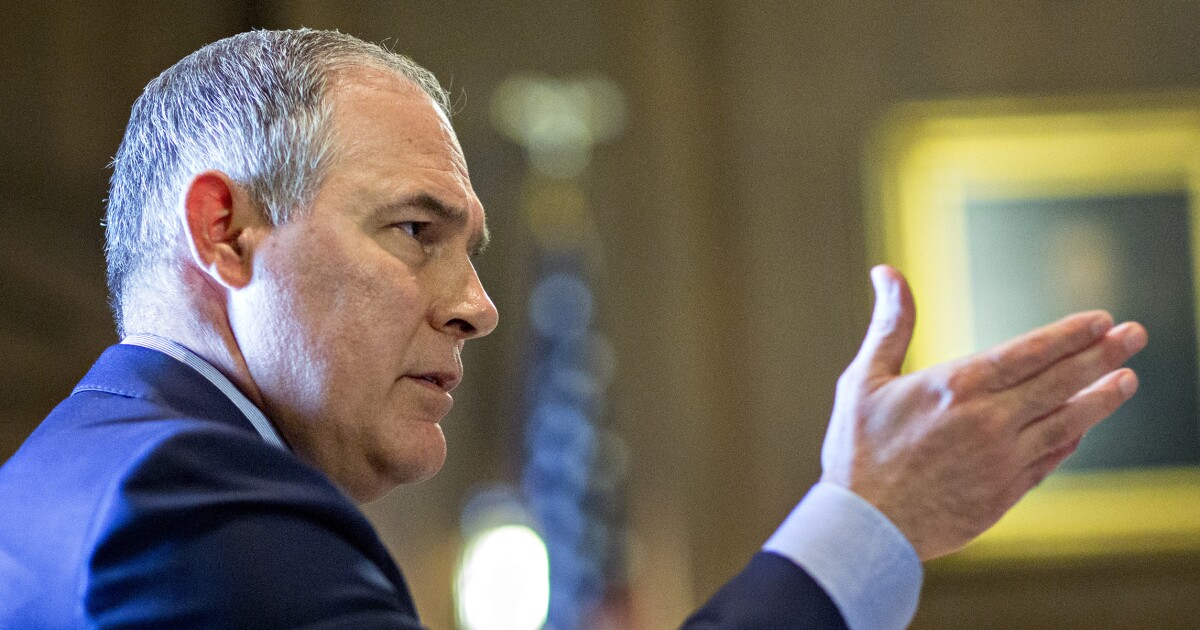 Former Environmental Protection Agency Administrator Scott Pruitt frequently "‘endangered public safety" by telling his security detail to drive above the speed limit due to running late to meetings frequently, according to a report released Thursday.

Former Environmental Protection Agency Administrator Scott Pruitt frequently “‘endangered public safety” by telling his security detail to drive above the speed limit due to running late to meetings frequently, according to a report released Thursday.

Federal agents wrote that Pruitt, former President Donald Trump’s first EPA head, regularly told his drivers to “speed it up” and instructed them to use sirens and lights to move through traffic, according to the report.

The revelations come shortly after Pruitt joined the open Oklahoma Senate race. Pruitt, a former Oklahoma attorney general and state lawmaker, is part of a crowded Republican primary field on June 28 vying to replace GOP Sen. Jim Inhofe, 87, who is giving up his Senate seat with four years left in his term.

Security agents found Pruitt “hard to disobey” despite the fact that lights and sirens are typically only used in emergency situations. Pruitt would often say, “We need to get there quicker,” even saying, “Can you guys use that magic button to get us through traffic?”

At one point in 2017, Pruitt told an agent to turn on the emergency signals while driving into oncoming traffic so Pruitt could pick up his dry cleaning while he was 35 minutes late to the meeting, the federal report added.

Pruitt’s instructions for drivers to speed were also offered “implicitly through his body language and cues,” sometimes without needing to tell the driver to hurry up, according to the report.

During at least one instance, a driver informed the EPA chief that emergency lights and sirens should not be used for his tardiness, which caused Pruitt to become silent for an “uncomfortable time.” Days later, the agent was removed from the position.

Allegations of Pruitt’s abuse of power have circulated in Washington, D.C., in the years since he stepped down in 2018 after a series of controversial expenditures and ethics violations.

When asked about speeding through traffic in his security detail by then-Sen. Tom Udall (D-NM) in 2018, Pruitt said, “I don’t recall that happening,”

“There are policies in place that governs the use of lights,” Pruitt added. “Those policies were followed to the best of my knowledge.”

From Pruitt’s early months in office, he faced questions about alleged spending abuses, including insisting on staying in luxury hotels that were costlier than allowed by government standards, first-class travel at taxpayer expense, and alleged cozy relationships with lobbyists, among other things.

He also sought to garner job opportunities for family members and once spent $43,000 on a noise-concealing room in his office to make private calls.

Pruitt announced in April his bid to run in the special election in Oklahoma to succeed Inhofe.