Lithuania has upped the ante against Russia in Moscow’s war against Ukraine, closing rail lines to the Russian enclave of Kaliningrad — a direct poke at the Russian bear. The bear poked back, warning that Lithuania would face a “serious negative impact.”

This follows on a series of warnings by Russian officials hoping to deter Western/NATO support for Ukraine. In May, former president Dmitry Medvedev, now deputy chairman of Russia’s security council, threatened nuclear escalation. “Such a conflict always has the risk of turning into a full-fledged nuclear war. This will be a disastrous scenario for everyone.” Russian Defense Minister Sergei Shoigu said the Russian military would consider NATO transports carrying weapons in Ukraine as targets to be destroyed.

The move by Finland and Sweden to join the NATO alliance prompted Kremlin spokesman Dmitri Peskov to warn that NATO “is not that kind of alliance which ensures peace and stability, and its further expansion will not bring additional security to the European continent.” He later added that Russia would have to “rebalance the situation” with its own measures. Maria Zakharova, Russia’s foreign ministry spokeswoman, threatened “military and political consequences” if the countries joined the bloc.

The Russian threats were, all in all, attempts to keep NATO out of the war. The alliance was never likely to send troops to fight for a non-member and there was a limit to how stringent sanctions would be in the fact of European reliance on Russian natural gas. The only real question, then, was the level of armament the West was prepared to provide to the Zelensky government. 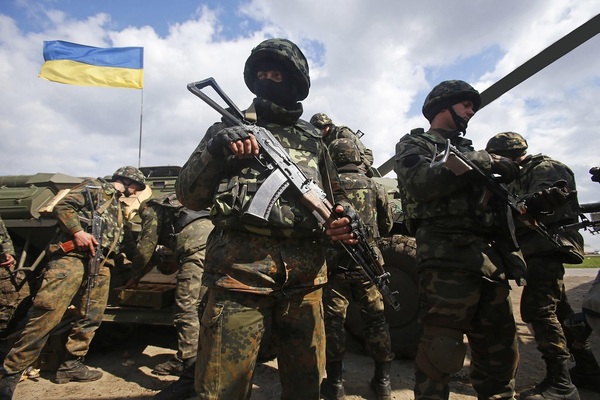 Thoughts of a Ukrainian victory peaked by May.

After an unpromising start, and failures of technology, Russia is doing what Russia does: grinding across Ukraine, chewing up people, buildings, assets, wearing down and grinding down everything in its path. Moscow’s approach has never been one that considers civilians, collateral damage, or wreckage. In Luhansk, Russian troops have been unable to capture strategic villages on the ground, and have resorted to shelling and airstrikes. According to the regional governor, Ukrainian forces control basically only the Azot chemical plant, which is sheltering fighters and an estimated 500 civilians.

The destruction of Grozny, where a Tufts University study estimated 25,000-50,000 civilian casualties, should have been a warning:

Russian troops entering Grozny were not only woefully unprepared for urban warfare but were undertrained even by basic infantry standards. Heavily armored vehicles like MBTs were all but useless in these densely packed, highly elevated environments. Chechen guerilla outfits imposed substantial costs on the advancing Russian forces, destroying Russian armored personnel carriers (APC’s) with relative ease. Thwarted at every turn, the Russian military became increasingly reliant on artillery fire, mortars, and carpet bombing runs to pound Grozny into submission.

But here is this month’s parallel:

The Ukrainians have fought the Russians valiantly, even conducting impressive counterattacks. But now the fulcrum has shifted in Russia’s favor as its massive artillery forces pound the daylights out of Ukrainian forces and innocent civilian centers in the Donbas region… time is not on the side of the Ukrainians in what has become an artillery-centric war.

No one helped the Chechens, and in 2005, the UN called Grozny the most destroyed city on earth.  The Ukrainians have help, lots of help from NATO and the U.S., which means they will continue to fight, and the Russians, with massively more manpower and a willingness to expend that manpower in a slow, grinding battle, will continue as well.

There is a warning for America and its allies embedded in this.

Congress has authorized billions in aid to Ukraine and billions more to replace war stocks, including $634 million to restock Stinger missiles, as the U.S. has already sent one-third of its Stinger and Javelin missiles to Kyiv. But contractor Raytheon, taking the contract, said it could not begin the replacement before next year.

Security analyst Stephen Bryen notes that, “The US and Europe… are increasingly dependent on high-tech supplies from Asia. Today there are severe supply bottlenecks, shortages and risk dependencies.” In addition, “When (a) contract is completed and there are no immediate follow-on purchases, production lines are shut down and second- and third-tier component suppliers also stop production.”

Supply shortages and bottlenecks will have an impact America’s ability to defend itself, its allies and its interests. An increasingly belligerent China with increasingly open threats to Taiwan, and a very unpredictable North Korea with its threats to American ally South Korea, are taking note and planning accordingly.

Threats and warnings go in all directions.

Image: Ministry of Defense of Ukraine