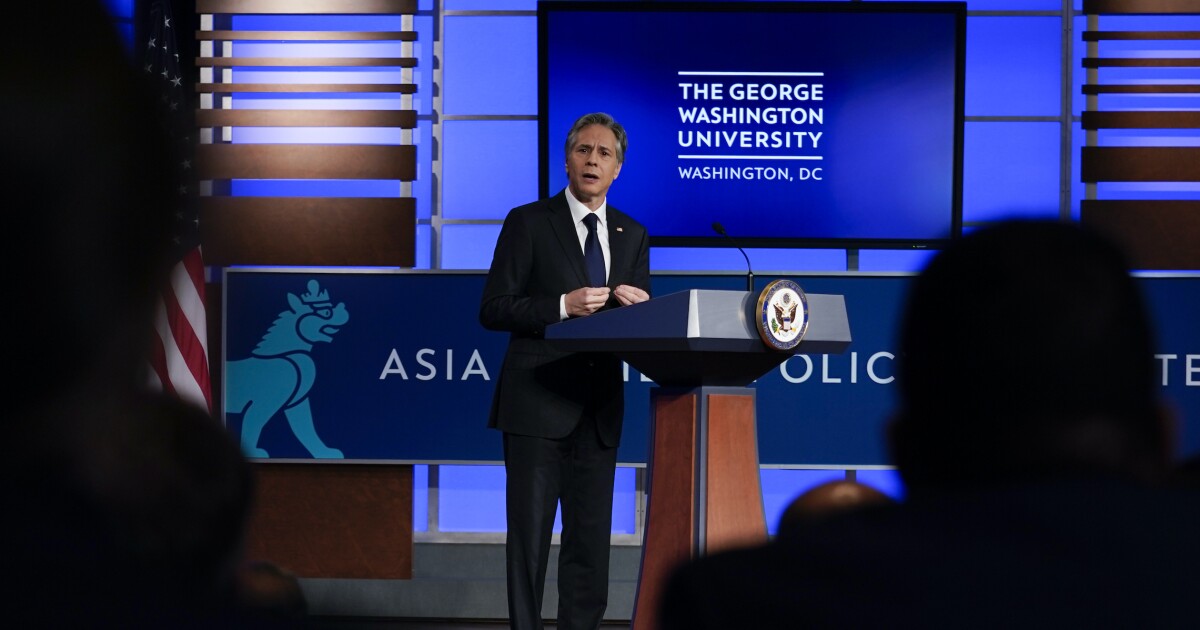 President Joe Biden’s administration is coordinating with allied forces to develop military capabilities tailored to counter China’s growing arsenal in order to deter war with the communist regime during an intensifying strategic rivalry.

President Joe Biden’s administration is coordinating with allied forces to develop military capabilities tailored to counter China’s growing arsenal in order to deter war with the communist regime during an intensifying strategic rivalry.

“Competition need not lead to conflict,” Secretary of State Antony Blinken said Tuesday at George Washington University while outlining the new U.S. strategy for China competition. “We do not seek it. We will work to avoid it. But we will defend our interests against any threat.”

Blinken foregrounded the intent to build an economic coalition to preempt Beijing’s ability to use economic clout against the United States and its allies, in addition to attracting the states that function as the swing voters of the rivalry. Yet that nonviolent struggle has to be predicated on the hard power of the world’s leading democracies, Blinken acknowledged, in light of China’s rapid modernization of the People’s Liberation Army.

“The administration is shifting our military investments away from platforms that were designed for the conflicts of the 20th century toward asymmetric systems that are longer range, harder to find, easier to move,” he said. “We’ll help our allies and partners in the region with their own asymmetric capabilities, too.”

That intention mirrors Beijing’s “asymmetric” playbook. Chinese officials have studied the U.S. military in recent decades and designed their own forces with an eye toward “avoiding enemy strengths, and concentrating on building asymmetric advantages against enemy weaknesses to ‘change what is inferior into what is superior,’” as the Pentagon acknowledged in a 2021 report on Chinese military power.

“China is the only country with both the intent to reshape the international order and, increasingly, the economic, diplomatic, military, and technological power to do it,” Blinken said.

Blinken’s remarks are just the latest sign of how Washington and Beijing are maneuvering for advantage in advance of a possible conflict, even as their primary tools of competition remain economic rather than military. Chinese officials scored a major success last month when the Solomon Islands, an archipelago country northeast of Australia, where the major Battle of Guadalcanal was fought during World War II, agreed to a security arrangement with Beijing that could eventually allow Chinese forces to threaten crucial supply lines linking Australia to the U.S.

“China’s support has played an important role in developing the economy, improving people’s livelihood, and fighting the pandemic and has created a large number of jobs in Solomon Islands,” Chinese Foreign Affairs Ministry spokesman Wang Wenbin said Thursday. “Solomon Islands is looking forward to more cooperation between the two countries.”

Chinese Foreign Affairs Minister Wang Yi is on a two-week tour of the Solomon Islands and other Pacific island states, reportedly in pursuit of “traditional and nontraditional security” arrangements that could isolate Australia from its nearest neighbors and other major democratic allies.

“This is China seeking to increase its influence in the region of the world where Australia has been the security partner of choice since the Second World War,” Australian Prime Minister Anthony Albanese said this week.

China’s diplomatic maneuvering raises the risk of a war with the U.S., according to another Pacific island state leader.

“The practical impacts, however, of Chinese control over our communications infrastructure, our ocean territory and the resources within them, and our security space, aside from impacts on our sovereignty, is that it increases the chances of China getting into conflict with Australia, Japan, the United States and New Zealand,” Federated States of Micronesia President David Panuelo wrote to the other leaders in the Pacific this week.

Blinken urged Congress to authorize “historic investments in research and innovation, including in fields like artificial intelligence, biotechnology, and quantum computing,” in order to preempt Chinese dominance of those high-tech sectors and give Western allies the kind of economic growth needed to appeal to countries that might otherwise be drawn to Chinese partnerships.

“We’ve heard firsthand about buyer’s remorse that these deals can leave behind,” he said. “There is growing convergence about the need to approach relations with Beijing with more realism. Many of our partners already know from painful experience how Beijing can come down hard when they make choices that it dislikes.”

The security agreement between China and the Solomon Islands was foreshadowed in 2019, when Chinese officials persuaded the leaders in Honiara to sever their diplomatic relations with Taiwan, a democracy that Beijing regards as a breakaway province that must be brought under mainland control, although the Chinese Communist Party’s regime has never ruled the island.

Biden, for his part, implied this week that the military will intervene if the mainland regime launches an invasion of Taiwan. He said the U.S. has made “a commitment” to do so, although federal law and several U.S. presidents have remained intentionally ambiguous on that point. Blinken maintained that the U.S. does not “support Taiwan independence” or other revisions of the diplomatic balance that Washington, Beijing, and Taipei have struck to avoid a war over the last several decades.

Blinken continued: “We’ll continue to uphold our commitments under the Taiwan Relations Act to assist Taiwan in maintaining a sufficient self-defense capability and to maintain our capacity to resist any resort to force or other forms of coercion that would jeopardize either the security or the social or economic system of Taiwan.”