The best of the best from the author of 24 books and hundreds if not thousands of essays as well as appearances regularly on TV.

Victor Davis Hanson is one of the most respected historian/intellectuals of the conservative movement; I have been an enthusiast of his work going back to my first experience with his erudition and eloquence—The Western Way of War (1989, 2nd ed. 2000), an explanation of why citizen soldiers are so effective and why Western Armies have been so lethal.  Now he is past 24 books and hundreds if not thousands of essays as well as appearances regularly on TV that all provide sober, thought-provoking and insightful political commentary.  Any observer of VDH cannot help but be impressed with his solid and thoughtful analysis of political and social issues, probative and measured.

I reviewed Dr. Hanson’s book on WWII at American Thinker in 2018, but I am late to the party on his latest book The Dying Citizen: How Progressive Elites, Tribalism, and Globalization Are Destroying the Idea of America by Victor Davis Hanson  433 pages Kindle $17.99,  Hardcover  $21.37  ASIN ‏ :  B08W4ZZTTP ‎ (Basic Books 2021).  Two reviews have already appeared at American Thinker by Richard Baehr  and Terry Scambray that are excellent, but when I read the blurb by the distinguished Roger Kimball that named Dying Citizen Hanson’s magnum opus, I was compelled to make the pitch again to readers about the importance of Hanson and his compelling argument for good citizenship as the basis for western civilization and the western ideal of elective self-governance. 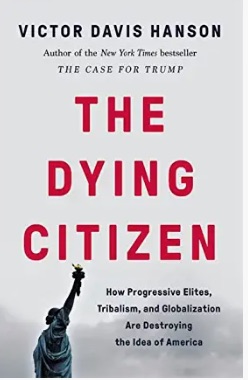 Dying Citizen  revisits The Western Way of War theme, the importance of the citizen in a western community/society.  The importance of the citizen as opposed to the role of subjects of a regime, king, prince, emperor, chief, or khan, and the advance of society that is made when citizens govern.  The beginning of Western Civilization is the city state citizen dominated political entities of Greece.

Dr. Hanson is a 3rd generation raisin grape farmer in Selma California, the Central Valley, just outside of Fresno. Classics trained at Stanford, he formed the Classics program at California State University Fresno and became an outstanding author, essayist and commentator as a fellow of the Hoover Institute of Stanford University.  He favored the presidency of Trump as a reinvigoration of American values and a rejection of dangerous elitist states and globalism. This book was written, I believe, to educate the reader on the unique nature of American citizenship and the importance of development of citizenship through history.

Chapter One is about peasants (think subjects) and the importance of a development in society of an influential middle class.  Without a vibrant middle class citizenship cannot develop because the society is composed of the noble/master/oligarch group dominating the serfs/peasants/proletariat.  He points out why the decimation of the middle class in America threatens the civic societal American unity.  Welfare statism and dominance by the ruling class elites takes the vitality out of a nation.

The Second Chapter borrows on the basis for one of Hanson’s other successful books, Mexifornia (2003) that warned of the destructive danger of unfettered immigration and the creation of a resident rather than citizen class because of immigrants who have no intention of assimilation and becoming loyal and contributing American Citizens.

Hanson raises the question: do these illegal and even legal immigrants have in mind becoming American citizens or are they just moving to a place that offers benefits and protections and looks better than where they came from?  Sure, people want a better life, but will they become good citizens or just parasites?

Moreover the open borders crowd sees the immigrant population as a political lever that will allow Democrats’ power with no end that fits with the non-assimilating parasitic nature of the immigration flood.  In fact Hanson points out the devolving situation of tribalism and ethnic/racial/religious divisions that will destroy the concept of American Citizenship and allow a growing group of people who refuse to become loyal and contributing citizens of their adopted country.  (Think of the Mexican crowd booing the American Soccer team in a Los Angeles stadium or the La Raza movement.)

The third chapter hits on the most serious threat to American Unity: tribalism and racism in the populace energized by Marxist ideologues. The content of the chapter traces the negative impact of tribalism through history and how it destroys national and societal unity and the spirit of effective citizenship. Hanson puts a deft touch on this discussion because of his deep and comprehensive erudition and his orientation in the foundations of self-governance, Classical Western History and the legacy of the Greeks and Romans.  But he also offers some examples of how things fall apart due to divisions created by nascent tribalism and racism. America is now in the squeeze created by tribalism and racism and Hanson properly exposes the elements of danger and the consequences of failing to extinguish the fires of division.

In this chapter, Hanson also provides an insightful look at the dangers of the modern “equity” political movement that is just reverse racism and allows state action to impose limits on individuals that should not exist in a free society.  Statism, collectivism, racism all act in concert to destroy the American Iconic Land of Opportunity.  Moreover the ideological tenets of the movement are founded in the assertion that America is evil and flawed and deserves nothing but condemnation and destruction—not a good foundation for promoting citizenship.

Chapters 4 and 5 focus on the impact of what Angelo Codevilla and Hanson have both put on the front burner, the development of an elite and arrogant oligarchic ruling class both elected and not, the division between the country class and the ruling class.  In Chapter 4 Hanson exposes the negative aspects of the administrative state.  In Chapter 5 he discusses the poorly disguised collectivist socialist evolutionists who would discard the America of the founders, all the founding documents, and the republican form of government in favor of a mobocracy.

Chapter 6 goes after the mostly American globalists who are now ensconced as elites and would endeavor to push America to become a pawn in the globalist agenda.  I can’t go on. These jackasses are advocating a move for American surrender of their sacred constitutional rights and the Constitutional Republic created by the founders.

Hanson wrote a final chapter (epilogue) to this Magnum Opus that cannot be ignored.  He explained that Trump advocated for the principles that underlie the Constitutional Republic, support of nationalism, the citizens, the middle class, and rejection of the deep state that is anti-American, concern for the middle class and the American occupants of that middle class, an effort to straighten out the tax and economic and foreign policy/trade situation that would restore an American Middle Class that would also restore citizens to their rightful position as rugged individualists, the foundation for American success.

A few accolades are appropriate, considering the inadequacy of my book review—and I am not uneasy in this effort, I enjoy it:

“Mr. Hanson, an accomplished classicist and a senior fellow at the Hoover Institution, is one of the great amalgamators of American political writing. He has a particular gift for bringing together a dizzying array of events, controversies and ideas and making sense of them by advancing a coherent argument that incorporates thousands of years of history—Wall Street Journal

“As Victor Davis Hanson shows in his learned, powerful, and troubling new book, The Dying Citizen, the steady devolution of citizenship speaks volumes about where we are today and where we seem to be heading… Hanson lays out this grim diagnosis with his usual clarity and brilliance, moving easily from his deep specialized knowledge of the ancient Greek and Roman world through savvy observations about present-day politics and American society.”―The New Criterion

“Hanson is well-positioned to describe the evolution of citizenship from ancient times through the modern era, and especially the assumptions about citizenship underlying America’s constitutional order….  Hanson presents, clearly and concisely, a case that critics will struggle to refute. His troubling argument has far-reaching implications. The Dying Citizen is a book that all Americans should read, then discuss with friends and neighbors.”―Claremont Review of Books

“Politicians often speak to “my fellow citizens,” implying a kind of common project among all citizens.  In America, that project is our shared devotion to our founding principles.  Victor Davis Hanson explains in The Dying Citizen, however, that this uniquely American concept of citizenship is imperiled—whether from ancient threats“. .. . Victor Davis Hanson shows how so many contemporary problems—identity politics, the border crisis, bloated government, etc.—have only worsened for the lack of a vigorous and clarifying idea of citizenship. In this deeply democratic idea, Hanson points to a way beyond what ails us.” ―Shelby Steele, author of Shame

“The great glory of the democratic revolution of the eighteenth and nineteenth centuries was extending the blessings of citizenship to anyone and everyone who embraced the principles and responsibilities of self-governing nations. As Victor Davis Hanson explains, by subtle degrees we’re reversing course, the hour is late, and we have Hanson to thank for this capacious account of what we need to recover.”―Steven F. Hayward, author of Patriotism Is Not Enough

“This is not a drill—this is the real thing. If you don’t believe that the survival of the American republic hangs in the balance, you must read Victor Davis Hanson’s relentless exposition of the facts. America’s free citizenry is at imminent risk of defeat at the hands of an unelected Deep State allied to globalist elite that flouts. . Get this book into the hands of everyone you know.”―David Goldman, deputy editor of Asia Times and author of You Will Be Assimilated

“. . . Victor Hanson is deeply educated in the classics, where knowledge of regimes was first developed. It also requires a close observation of what is happening today, about which he writes insightfully and in profusion. In this book, Hanson demonstrates yet again his command across time and for our time. This book and he are a treasure.”
―Larry P. Arnn, president of Hillsdale College.

Who am I to praise this great man, this patriotic American?  My praise is inadequate.