Tourist visa lines into the U.S., unlike illegal alien transmission lines, take months or sometimes years, to get through.

Want to Visit America? Forget Getting a Visa. Just Walk Across the Border. – American Thinker<!—->

The United States is one of the most popular tourist destinations worldwide. In 2019, only Spain and France had more visiting tourists, likely due to the rich history, architecture, cuisine and culture that these European countries provide.

The U.S. offers iconic cities such as New York, New Orleans, and San Francisco, as well as abundant national parks, and entertainment meccas like Las Vegas and Nashville. The visitors they draw bring a huge bump to the U.S. economy.

In 2019, the number of international tourist arrivals to the U.S. stood at almost 80 million after being on the rise for over a decade. Thanks to this influx of visitors and a boost in U.S. travel spending, the travel and tourism industry contributed over 1.1 trillion U.S. dollars to the country’s GDP and supported millions of jobs in 2019.

COVID, of course, put a temporary halt to tourism worldwide, with many countries closed to visitors during much of the pandemic. Those that remained open had ever-changing rules and requirements, not only to enter these countries, but other rules for those attempting to return to their home countries.

Tourist visas are technically called B1 or B2 visas and are used for non-U.S. residents desiring to travel to the U.S. to conduct business, attend a professional conference, visit family, or simply take a vacation. Residents of 39 specific countries are eligible for a visa waiver, allowing a 90-day stay in the U.S. for business or tourism without having to apply for a visa.

These countries are mainly first-world countries as in most of Europe and a few in Asia and Oceania. Notably absent are countries in the Middle East, Africa, or South America. One might consider this racist or xenophobic but there are also practical concerns over potential terrorism or visitors wanting to travel to the U.S. and never return to their home countries.

Interestingly there are no such concerns over those entering the U.S. through our porous southern border.

Missing from the visa waiver program are the 155 remaining countries where most residents want to simply visit family, take in the Grand Canyon, or enjoy a few shows in Vegas. How can they get to the U.S.?

An interview at a U.S. embassy or consulate is required to obtain a travel visa. This should be easy and straightforward, but it is anything but, a nightmare for those applying for a visa. The average wait time for an appointment is 344 days, almost a year. And that’s only the average. 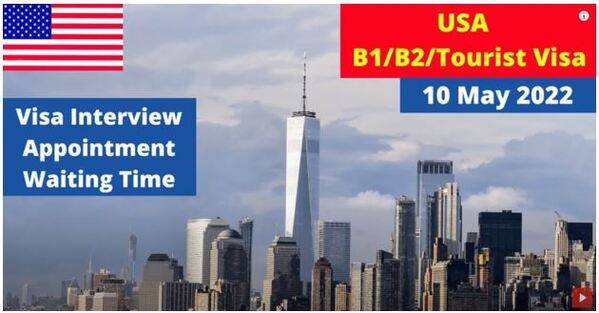 If a Nigerian woman wants to visit her boyfriend in Atlanta, or Denver, for example, she will have to wait 760 days just for an embassy appointment. A family from Colombia hoping to visit Disney World will wait 696 days for their visa appointment. A physician in Mexico wanting to attend an American medical conference won’t get an appointment for 570 days, long after the medical meeting is over.

Yet the irony is that if that same physician, family, or woman made their way to the U.S. southern border, they could sashay across, and if even apprehended crossing, they could claim persecution, ask for asylum, and be granted entry into the U.S. They would also receive a welcome basket of goodies including food stamps, Medicaid health insurance, Social Security income, and other forms of assistance, including free education for their children.

A real-life example of how these delays affect visitors is a semi-retired Australian international businessman invited to a friend’s wedding in Seattle with 160 days’ advanced notice.

He was told he would have to wait anywhere from 216 to 300 days for a visa interview, meaning, he could not attend his friend’s wedding despite having spent a decade traveling around the world, including the U.S., on business.

Why is there such a long wait for a visa interview appointment? Of course, COVID is blamed, staffing issues, lockdowns, and so on, despite COVID mostly being over. Will monkeypox be the next excuse? Why is the U.S. having such problems? What about someone from the U.S. wanting to travel to Australia?

An Australian visa can be obtained online. Per their visa website, “It is not necessary to make an appointment with an Australian embassy/consulate.”

Why can’t the U.S. follow a similar process? Or hold interviews virtually via Zoom or another similar platform, clearing the backlog, allowing foreigners to travel to America to visit, celebrate, holiday, and spend their money on American goods and services?

Is the U.S. economy doing so well that American businesses are turning away customers? “American consumers are already cutting back on spending”, according to a new CNBC survey. So why are we making it so difficult for foreigners to visit America and spend their money here?

Illegal immigration costs U.S. taxpayers over $100 billion a year, yet tourism nets the U.S. more than $1 trillion a year, a ten-fold plus to the U.S. economy. Why are we making it so difficult to visit and stimulate our economy?

We have foreigners from who-knows-where streaming across our southern border. NBC News reports, “More than 234,000 migrants tried to cross southern U.S. border in April, a new high.” That’s only those who were apprehended and counted. How many more crossed undetected? Twice as many? Three times as many?

Currently 450,000 individuals are waiting, some for years, for a visa interview to travel legally to the U.S. That’s the equivalent of two months’ of illegal border crossers. Only 28,000 of those waiting for their interview will have an interview in May 2022, a tenth of those attempting to cross illegally. Is anything wrong with this scenario?

For an interview lasting 3 to 5 minutes, an embassy could perform 10 interviews per hour, 80 per day, 400 per week. More than 100 embassies, or 40,000 interviews, could be conducted each week, clearing and eliminating any backlog. The U.S. actually has more than 250 embassies and consulates around the world.

Individuals from foreign countries, seeking to visit the U.S. legally, playing by the rules, spending their own money while in the U.S. are told to wait on a multi-year line. At the same time, those entering the country illegally, not playing by the rules, not stimulating the U.S. economy, are enjoying the largess of U.S. taxpayers, and are shuttled to the front of the line.

Is this incompetence? Or a planned and coordinated Cloward-Piven strategy to undermine and eventually destroy America? Draw your own conclusions.