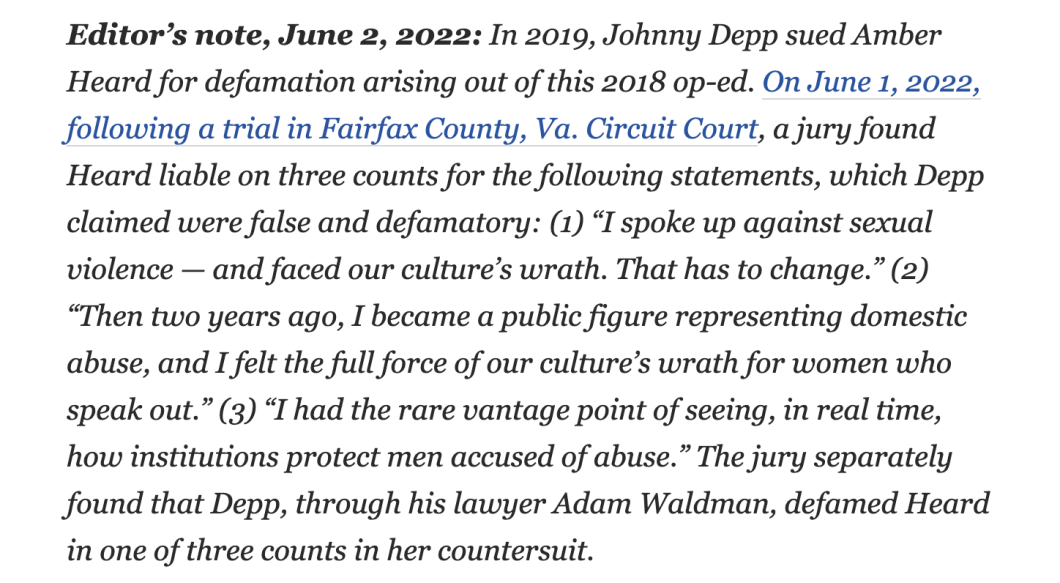 In a Thursday interview on The Today Show, Bredehoft was asked if her client wants to appeal. The attorney responded, “Oh, absolutely, and she has some excellent grounds for it.”

She further claimed that Depp “already had his shot” in his U.K. trial against the Sun. Heard’s legal team attempted to have the case dismissed, Bredehoft added. However, they were not successful.

“Is she able to pay a $10.4 million judgment?” journalist Savannah Guthrie asked.

“Oh, no. Absolutely not,” Bredehoft replied.

On Wednesday, the jury overwhelmingly sided with Depp, finding that he successfully proved all the elements of defamation for each claim. He was awarded $10 million in compensatory damages and $5 million in punitive damages.

The jury was not swayed by Heard’s arguments, only finding the Pirates of the Caribbean actor liable for one of her defamation claims. She was awarded $2 million in compensatory damages.

The note explains that Heard was found liable for defamation for three statements included in the piece.

“A jury found Heard liable on three counts for the following statements, which Depp claimed were false and defamatory: (1) ‘I spoke up against sexual violence — and faced our culture’s wrath. That has to change.’ (2) ‘Then two years ago, I became a public figure representing domestic abuse, and I felt the full force of our culture’s wrath for women who speak out.’ (3) ‘I had the rare vantage point of seeing, in real time, how institutions protect men accused of abuse.'”

“The jury separately found that Depp, through his lawyer Adam Waldman, defamed Heard in one of three counts in her countersuit.”

The Aquaman actress released a statement after the verdict, claiming “it sets back the clock to a time when a woman who spoke up and spoke out could be publicly shamed and humiliated.”

Depp similarly made a statement, saying he feels “at peace.”

In the actor’s Instagram post, he said, “My decision to pursue this case, knowing very well the height of the legal hurdles that I would be facing and the inevitable, worldwide spectacle into my life, was only made after considerable thought.”

“From the very beginning, the goal of bringing this case was to reveal the truth, regardless of the outcome. Speaking the truth was something that I owed to my children and to all those who have remained steadfast in their support of me. I feel at peace knowing I have finally accomplished that.”