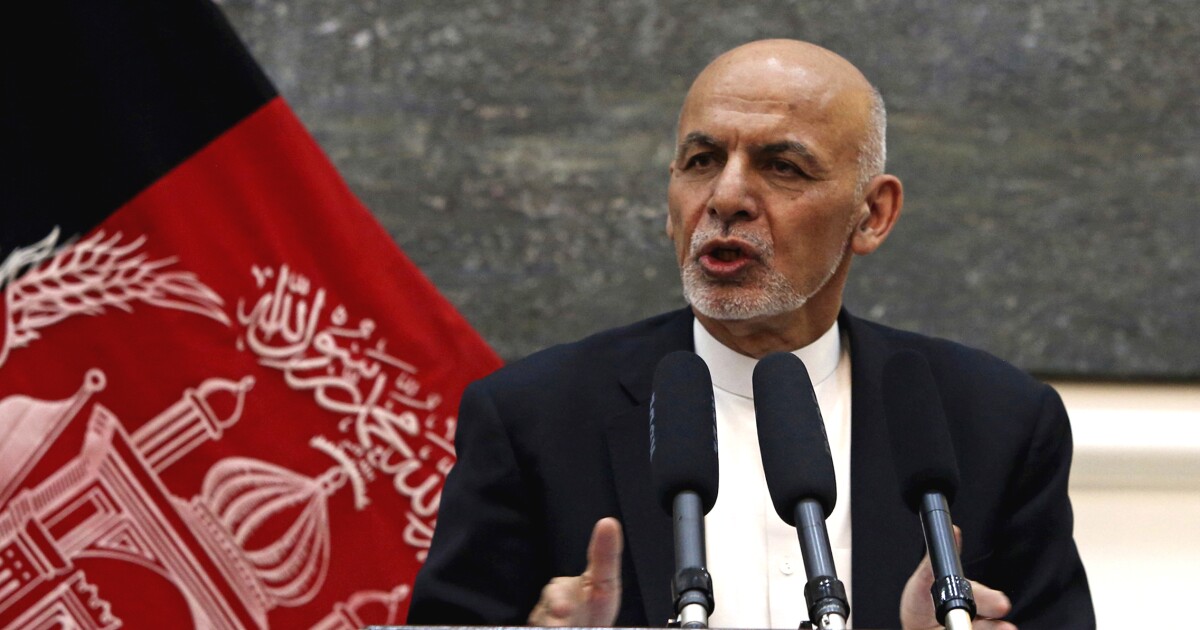 Former Afghan President Ashraf Ghani did not flee the country with roughly $170 million dollars amid the Taliban takeover, a claim that had surfaced at the time.

Former Afghan President Ashraf Ghani did not flee the country with roughly $170 million dollars amid the Taliban takeover, a claim that had surfaced at the time.

As the Taliban entered the capital of Kabul, Ghani, the first lady, and other officials boarded helicopters at the presidential palace with roughly $500,000, much less than the previous reports, according to the latest report from the Special Inspector General for Afghanistan Reconstruction released Wednesday.

PENTAGON WATCHDOG FINDS PROBLEMS WITH ‘OVER THE HORIZON’ STRATEGY IN AFGHANISTAN

Ghani, the first lady, national security adviser Hamdullah Mohib, and head of the Presidential Protective Service Gen. Qaher Kochai boarded one of the four Mi-17 helicopters allocated to the president, while the approximately 10 senior staff members got on a second. Roughly 20-25 members of the PPS were on the third.

There was minimal luggage aboard the three helicopters, the report said, citing “every eyewitness” whom they interviewed. The investigators found that the first lady had two suitcases with her, both of which carried clothes, while Kochai’s suitcase had the monthly discretionary cash budget for the protective service, which was roughly $200,000.

Deputy national security adviser Rafi Fazil had a backpack with the funds for the National Security Council — approximately $240,000.

Afghan Ambassador to Tajikistan Mohammad Zahir Aghbar claimed that Ghani “stole $169 million from the state coffers” days after he fled, the first time the accusation had been made, while the SIGAR report notes that such a large sum of cash would be “difficult to conceal.”

“It would be quite substantial in terms of bulk and heft: $169 million in hundred dollar bills, stacked end to end, would form a block 7.5 feet long, 3 feet wide, and 3 feet tall. In other words, it would be somewhat larger than a standard American three-seater couch,” the report says. “This block would have weighed 3,722 pounds, or nearly two tons. The Mi-17 helicopters that the group flew on do not have separate cargo holds. Therefore, all of the cargo would have been visible in the cabin next to the passengers.”

The flights took off Aug. 15, just two weeks after the Taliban launched a military offensive against the Afghan military. The military’s morale and willingness to defend its country collapsed after the Trump administration agreed to a deal in February 2020 with the Taliban to leave within 14 months and the Biden administration upheld it, a previous SIGAR report found.

Between the time Ghani fled and the U.S. withdrawal at the end of the month, Western countries launched the largest noncombatant evacuation operation in history, with roughly 120,000 people being evacuated, though thousands of Afghan allies, who would be at risk under a Taliban regime, were left behind.

Ghani and the three helicopters landed in Uzbekistan and were met with hostility on the tarmac. They were forced to leave and ultimately traveled to the United Arab Emirates. The group paid $120,000 of the money taken from the palace to charter a Kazak Bombardier plane to Abu Dhabi, according to the report.