Today in history witnessed one of the most remarkable feats in the long war between Islam and Christianity.

When Charlton Heston Shattered the Teeth of Islam – American Thinker<!—->

Today in history witnessed one of the most remarkable feats in the long war between Islam and Christianity: the capitulation of the great Muslim kingdom of Valencia to the Spanish warlord Roderick (or Rodrigo) Díaz of Vivar — better known to posterity as “the Cid” (from the Arabic honorific al-sayyid, “the lord”).

In the late eleventh century, the Almoravids, a semi-civilized Berber group committed to jihadist teaching, began to pour into Spain from Africa to aid their Spanish counterparts, the Moors, against the Christians.  The Cid’s premiere modern biographer, Professor Ramón Menéndez Pidal (d. 1968), summarized the mood and stakes:

With the Almoravid invasion, the struggle between the two civilizations had reached its height. … [W]ith the invasion of the desert races and the recrudescence of Islamic fanaticism, a new chasm opened out between the two. And, on the Christian side, it was the Cid who, as the leader of the resistance against the victorious invaders, showed himself the most determined to carry on the war without giving or seeking quarter. … [I]t was upon the Cid that the task devolved of resisting, unaided, the whole might of Islam.

Toward the end of the year 1093, a secret plot between the Almoravids and the Moors of Valencia, which had only recently become tributary to the Cid, resulted in the overthrow of its king, Yahya al-Qadir, who had “increased their [Valencians] hatred by being a friend to the Christians” — that is, by being a vassal to the Cid.  During the uprising, fanatical Muslims discovered al-Qadir trying to abscond out of Valencia dressed in and concealed by a woman’s burqa.  To cries of “Allahu akbar,” the mob slaughtered him as an apostate and hurled his body in a camel dung pit.

On learning of the Valencians’ treachery and murder of his vassal, the Cid’s “anger was kindled, and his soul was inflamed,” writes the Muslim chronicler al-Maqqari.  Like a fierce storm he came and with extreme violence thrashed the Valencian countryside, taking all the castles and suburbs up to the city’s very walls.  He “fought so fiercely,” writes Ibn al-Qama, who was present in Valencia, “that the Moors were terrified at the havoc he played among them.”  From the wreckage of the lands he stormed through, and as an indication of Roderick’s iron determination, he had a small town built in a few weeks — complete with granaries, ramparts, and even churches — near and to launch operations against the walls of Valencia.  In short, “with growing harshness,” he “gave the Spanish Moslems to understand that no mercy would be shown to any who sought an alliance with the Africans.”

Months passed, and mass starvation soon plagued the Moorish kingdom, but the Muslims continued to hold out on the conviction that their Almoravid allies would eventually come to their rescue.  At long last, an immense host of Almoravids was espied marching to Valencia’s relief.  Acting fast, the Cid, who was camped outside the walls of Valencia, destroyed all of the bridges leading to the city and flooded the countryside with water from the canals, so that only one strip of land, which he now controlled, was dry.  Done none too soon, a massive dust storm heralded the arrival of the Islamic hordes of North Africa.

[Now] when the news came that the Africans had arrived at Alcira, the Valencians, frantic with joy, rushed to the walls to scan the horizon for signs of their saviors and watch by night the twinkle of the numberless fires of the Almoravid bivouacs. … And all the time the citizens prayed unceasingly for Allah’s aid against the Cid and agreed in council to plunder the Christian camp and the stores and hostels of the suburb when the battle reached the wall.

When morning came, the Cid and the Valencians awoke to a strange sight: empty fields.  The jihadist saviors of Valencia had retreated in the dark over the flooded plains, abandoning the city to its fate.  A contemporary chronicle allots two sentences to this ignominious event: a large “army of Moabites [Almoravids], swiftly on its way to relieve the siege, approached Valencia.  But they did not dare to commit themselves to battle with Roderick.  Greatly fearful of him they dispersed by night and retired to their bases in confusion.”

Black despair now fell on the Moors of Valencia: “they were like drunkards who understand not one another,” wrote Ibn al-Qama; “they became as one that falls into the sea.”  Their mood was not helped by the Cid’s army.  Completely unopposed, it now surrounded the city’s walls and loudly reviled the oath-breaking Muslims with vows of unrestrained vengeance.  Topping it all off, the famine had reached the point that “the poor were driven to eating the flesh of human corpses.”  With no hope, Valencia finally surrendered to the Cid — “may the curse of Allah fall on his head!” to quote al-Maqqari — on June 15, 1094, after a nearly nineteen-month-long besiegement, and Roderick Díaz of Vivar became its undisputed lord — literally, its sayyad, Cid.

Although it did not ostensibly concern them, even Europeans outside Spain rejoiced at this outstanding feat — for “the conquests by the Cid” were seen as “a barrier protecting, not only Spain, but the whole of Western Europe from the Moslem peril.”

There is much more to say about the Cid’s exploits against the jihad (he receives an entire chapter in my new book).  Even so, it is perhaps his conquest of Valencia that, when closely examined, truly underscores his remarkable nature.  As Roderick’s modern biographer, Pidal, explains:

It savors of madness that a single man, unsupported by any national organization and lacking resources even for a single day, should appear before [the walls of] Valencia determined upon restoring a rule that had been overthrown this second time by an enemy [the Almoravids] who had proved irresistible to the strongest power in Spain [Emperor Alfonso VI]: that he should dream of doing what the Christian Emperor had failed to do, and in the teeth of the Moslem Emir’s opposition [and succeed in] … the most extraordinary achievement ever performed in Spain by anyone but a king.

This article was abstracted from Raymond Ibrahim’s new book, Defenders of the West: The Christian Heroes Who Stood Against Islam.  Ibrahim is a Shillman Fellow at the David Horowitz Freedom Center, a Judith Rosen Friedman Fellow at the Middle East Forum, and a Distinguished Senior Fellow at the Gatestone Institute. 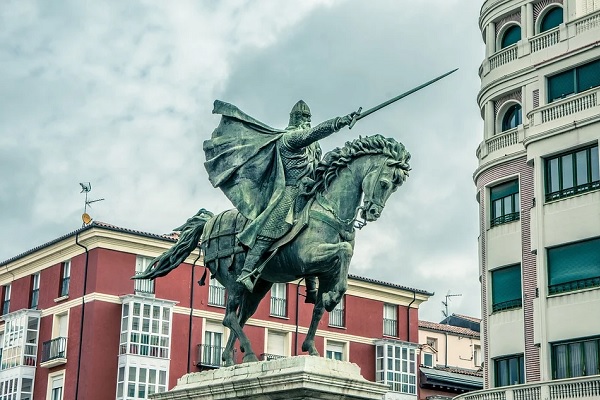