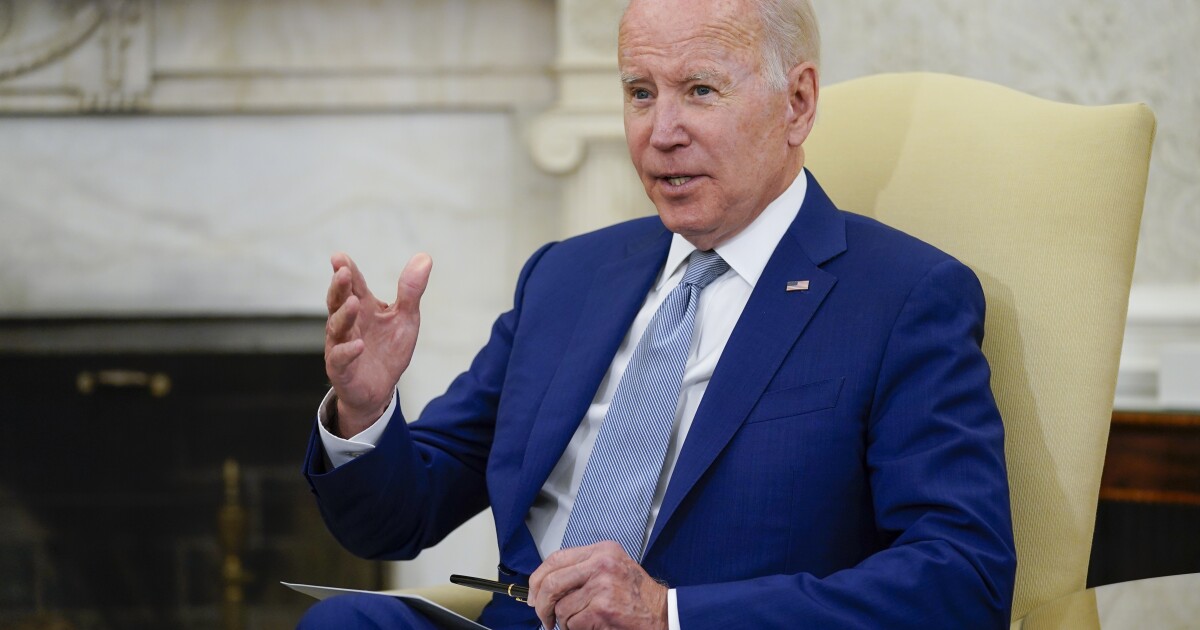 President Joe Biden's economic message is being overshadowed by inflationary pressure, but that is not stopping him or his aides from pitching his spending packages to voters before the 2022 midterm elections.

President Joe Biden’s economic message is being overshadowed by inflationary pressure, but that is not stopping him or his aides from pitching his spending packages to voters before the 2022 midterm elections.

The White House this week launched a concerted effort to underscore Biden’s economic approach, including how he intends to counter inflation. Yet strategists contend it could be too late for the president to capitalize on his bipartisan infrastructure deal and the American Rescue Plan before November.

Biden has limited time to change public opinion about his economic management because sentiment tends to cement around Memorial Day, according to former Republican National Committee spokesman Douglas Heye.

“I’m surprised I haven’t seen this earlier from Biden,” he told the Washington Examiner. “A lot of voters are making very real family decisions based on what everything costs, and until that is assuaged, and that won’t be anytime soon, it’s hard for the Biden administration to make any headway.”

Polls indicate the economy is voters’ No. 1 concern, according to Republican strategist Susan Del Percio, though Biden missing this infrastructure deal opportunity is especially “shocking,” she said.

At the same time, voters are not linking Biden’s spending bills with economic progress, at least not positively. Biden’s average overall job approval-disapproval rating is 40%-55%, according to RealClearPolitics. Biden’s economic management approval is 35%-61%.

Biden is reportedly frustrated that he is not being credited for improved economic data, according to NBC News. The president has similarly complained that he does not have enough supporters defending him on television. Del Percio described the latter as “an excuse,” asserting that aides lacked a “very deliberate strategy.”

In contrast, Rutgers University history, journalism, and media studies professor David Greenberg cited 3.6% current unemployment, a return to pre-pandemic numbers. Greenberg argued the economy is “strong,” adding that “we have recovered, and the [American] Rescue Plan obviously helped with that.”

“Most people have jobs, and many have gotten raises in the last year,” he said. “I think the ‘tone deaf’ ones are the ones who don’t know that people are doing pretty well right now.”

Greenberg did concede that an “overheating” economy means inflation is negating salary increases. However, it is the Federal Reserve Board’s responsibility, not Biden’s, to raise interest rates, he said.

“Which they should have done a year ago,” he continued. “But voters who are feeling the bite of inflation are likely to take it out on the party in power, of course, which is the Democrats.”

Biden published a Wall Street Journal op-ed Tuesday distilling the three pillars of his economic-inflation response, such as preserving the Federal Reserve’s independence, lowering costs, and boosting U.S. production capacity, as well as reducing the federal deficit. The op-ed was amplified by administration officials in media appearances and in Tuesday’s press briefing, in addition to Biden’s Oval Office meeting with Fed Chairman Jerome Powell.

National Economic Council Director Brian Deese denied that the push is an admission that Biden’s poor polling is tied to inflation. Deese also stood by his and other aides’ predictions that price spikes would be “transitory.”

“What the president has done with respect to communications has been to consistently explain to the American people where we are and where we need to go,” he said. “He understands that right now, the top issue on people’s minds is prices, prices at the gas station, prices at a grocery store. And he’s made very clear, and he’s communicating very clearly, that that’s his top economic priority.”

White House press secretary Karine Jean-Pierre avoided using the word “inflation” and “crisis” in the same sentence, only calling it “a difficult time.”

“His policies have helped the economy get back on its feet,” she said.

Del Percio apportioned some of the blame to congressional Democrats given Biden’s competing priorities and the plethora of local angles the infrastructure deal and the American Rescue Plan could provide.

“Democrats focus on why we were right, why we voted this way, even if you agree with them, and telling people everything that they should think and believe,” she said. “They give an intellectual reason for supporting them. People want a narrative. They want to feel connected.”