How does one pity a group that itself regularly exhibits no pity or even mere tolerance for others?

Why It’s So Hard to Pity Muslims – American Thinker<!—->

How does one pity a group that itself regularly exhibits no pity or even mere tolerance for others?  This is the conundrum one faces when considering Muslim victim groups.

Take the Rohingya, for instance, a Muslim people that primarily lived in Burma (Myanmar), while, like most invading and conquering Muslims, not being indigenous to Burma.  There they have been severely persecuted by the indigenous Buddhists of that nation.  While the Rohingya are regularly presented as victims — aspects of which is no doubt true — historically and precipitating their current status, whenever they had the chance, they were the ones quick to victimize others.

In fact, and not unlike the Muslim minorities of other nations, the Rohingya have been committing the same sort of anti-infidel mayhem, violence, terrorism, and rape that one is accustomed to associating with “radical Islam” — though news of it seldom reaches the West.  The main difference is that, unlike the West, Burma has responded with uncompromising ruthlessness.

Consider the words of Wirathu, the leading anti-Muslim Buddhist monk in Burma: “If we are weak, our land will become Muslim.” The theme song of his party speaks of a people who “live in our land, drink our water, and are ungrateful to us” — a reference to the Rohingya — which “we will build a fence with our bones if necessary” to keep out. His pamphlets say “Myanmar is currently facing a most dangerous and fearful poison that is severe enough to eradicate all civilization.”

For thousands of years my country (Indonesia) was a Hindu Buddhist kingdom.  The last Hindu king was kind enough to give a tax exempt property for the first Muslim missionary to live and to preach his religion. Slowly the followers of the new religion were growing, and after they became so strong the kingdom was attacked, those who refused to become Muslims had to flee for their life to the neighboring island of Bali or to a high mountain of Tengger, where they have been able to keep their religion until now. Slowly from the Hindu Buddhist Kingdom, Indonesia became the largest Islamic country in the world. If there is any lesson to be learnt by Americans at all, the history of my country is worth pondering upon. We are not hate mongering, bigoted people; rather, we are freedom loving, democracy loving and human loving people. We just don’t want this freedom and democracy to be taken away from us by our ignorance and misguided “political correctness”, and the pretension of tolerance. (Source: Facing Islam, endorsement section).

But surely all this is history? Surely having been at the receiving end of persecution, the Rohingya have come to learn how it feels, and, accordingly, come to deplore the idea of victimizing others simply because they are different?  Unfortunately that does not seem to be 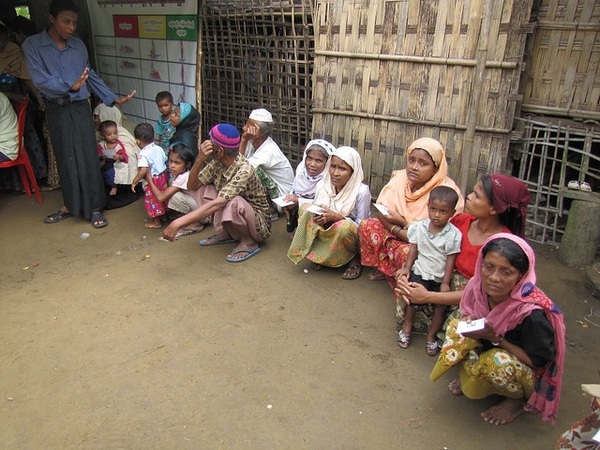 For example, in January of 2020, Muslim Rohingya in a Bangladeshi refugee camp savagely beat a dozen Christians in their midst.  “[They] attacked us, the Christians. They looted our houses, and beat up many Christian members. At least 12 Christians have been undergoing treatment at different hospitals and clinics,” a Christian reported, before adding, “We came under attack due to our faith….  On May 10, 11, and 13 last year, this same group of terrorists attacked us. They want us to leave this camp. They have been attacking us systematically.”

Discussing that spate of attacks, the Rohingya Christian Assembly from India said that Muslim Rohingya “attacked the whole Christian community in Kutupalong Camp…  Approximately 25 Christian families are displaced. It is winter and very cold, the victims have many minor children with them.” The group added that mobs armed with machetes — “hundreds in many groups” — invaded and destroyed every Christian home at night.

Last Christmas, 2021, in India, hundreds of Rohingya migrant Muslim workers, some lethally armed, violently attacked a group of Christian migrant workers near a factory.  According to the report, “A scuffle broke out at around 11.30 pm when some Muslims objected to carols being sung by Christian migrants from Nagaland and Manipur. While they were celebrating and dancing late at night, Muslim migrants attacked them.”  Several police and others who tried to intervene were also injured in the riot; fanatical Rohingya even “tried to burn policemen alive.”

Around the same time, Muslim Rohingya beat a Christian Rohingya in their refugee camp in Bangladesh.  According to Saydul Amin “I have been persecuted since I revealed that I am a Christian.  I no longer feel safe in the camp.”

The same report quotes David Sunir, another Christian who had been beaten in a Rohingya refugee camp:  “We Christians are a minority, and we live in fear.”

It should be noted that something similar is happening here in the West.  Reports of Muslim refugees (supposedly “victims” in need of asylum) attacking and killing the Christian minorities intermingled with them in European-based refugee camps regularly surface.

Indeed, at one point, teams of trained killers disguised as refugees were sent by ISIS into U.N. refugee camps to kill Christians, including “in their beds,” and to kidnap young girls to sell or use as slaves. This was reported after an ISIS operative “got cold feet and renounced jihad after witnessing Christians helping out other refugees within the camp. He then revealed that he had been sent with an Islamist hit squad to eliminate Christians as part of the hate group’s ideological drive to wipe the [Christian] religion off the map.”

The point here is not to argue that all Muslims are troublemakers and therefore “deserve” whatever treatment they get.  Rather, it is, and to reiterate the question initiating this article, to ask: How is one supposed to feel pity and want to provide sanctuary for a minority group that, once it has the chance, treats the minorities in its midst atrociously — and for no other reason than because they are different, in this case, because they are “infidels”?