Things don't look so rosy for the donkeys going forward. They're already being replaced.

Why the Democrats Can Expect to Lose a Lot of Elections – American Thinker<!—->

Twenty twenty was a bitter defeat for many of us, and the charges of fraud were not without merit.  What wasn’t true however were the tales of rigged voting machines swinging the election.  As I wrote not long afterward, the truth emerged, and it was just the same illegal ballot-harvesting operation the leftist activists always run, but this time with hundreds of millions in Silicon Valley dollars and the connivance of some election officials.

The new documentary out this week brilliantly documents how all this happened: D’Souza’s 2000 Mules.

For all the illegality, though, I think 2020 is going to be seen as a Pyrrhic victory, with so many of the Democrats’ bad ideas catching up with them and as the black and Hispanic base sours on Biden and his party.  A wipe-out in 2022 will surprise no one.

To a certain extent, we have been here before. Voters back in the 1980s walked away from the Democrats, heralding the Reagan Revolution, and many never looked back.  But a lot of party leaders understood their problems and did something about it.  The moderate Democratic Leadership Council, the DLC, which launched Bill Clinton’s national career, were effective in pushing back on the McGovern wing and at least pretended to be sensible centrists.  “The era of big government is over,” they said.

Today, the DLC is long gone, and even in the face of upcoming election collapse, the Democrats seem to be happy to take their marching orders from the kookiest people they can find, like AOC, who wants Biden to go even farther to the left.

We may never again see a moderate wing of the party.  Ruy Teixeira thinks the problem is that the Dems have lost touch with blue-collar workers.  So do Sohrab Ahmari and many other pundits.  But it is deeper than that.  White-collar suburban voters also hate CRT/transgender stuff in the schools, the rising crime rate, the inflation crisis, the open border, and the general obtuseness of Biden’s foreign policy.

The problem is that there really is no longer a functioning Democrat party worthy of the name.  There is just an election plaything that goes by that name, run from the gilded board rooms of America’s wealthiest non-profits.

People on the left are also starting realize this, like Sam Adler-Bell.  Michael Lind complains of the end of dissent in opinion journals, also the creature of the elite non-profits.  There is a lock-step conformity expected of all.  “Debate has been replaced by compulsory assent and ideas have been replaced by slogans that can be recited but not questioned: Black Lives Matter, Green Transition, Trans Women Are Women, 1619, Defund the Police.”

I would go farther: although it’s often said politics is downstream from culture — at least for Democrats and the American left — politics, culture, elite media, popular media, religion, education, and anything else are all downstream from the non-profit foundation complex that writes the grant money checks.  Checks for journalists, checks for activists, checks for politicians.

Political parties must be about the business of winning arguments and winning elections, at some point, lest they wither away.  But for the foundations and their executives, there is never any pressure to achieve such popular success.  They have their billion-dollar endowments, all invested in blue-chip American stocks paying huge dividends. They are secure and go on their merry way.  The biggest shame of it is that so many of these enormous foundations were begun by businessmen on the political right — Ford, Rockefeller, MacArthur, Mellon, etc. — only to have lefty activists hijack their boards.

Elected Democrats now have no interest in the average voter because that’s not whom they work for.  It’s the big money foundations and the armies of their paid activists.  They are the ones doing the all the ballot-harvesting that is finally being exposed in the 2000 Mules documentary.  They are the ones who can hand a presidential nomination to an Obama, a mansion to a BLM leader, or make a failure like Stacey Abrams very rich.

But that still raises a big question: why are so many Democrats, practical politicians, supposedly in touch with ordinary people, deep in the thrall of elite foundations?

I think it goes back to the formative days of our current politics, the early 1960s.  Amity Schlaes wrote a brilliant book about this era, Great Society, A New History, and her thesis is that just two men on opposite sides created much of the America we live in today.

One of them is Ronald Reagan, and you likely know a lot of his story, from running the Reds out of Hollywood in the 1940s, to teaming up with the visionary leaders of General Electric to fight the shop-floor militants of the 1950s and inspire a new kind of American business ethos, more entrepreneurial and participatory — the Theory Y leadership model.  Reagan then went into politics, as governor of California, to champion law and order and limited government.  This was when California really was the Golden State.

The other person is all but forgotten today: the UAW president, Walter Reuther.  Reuther started out as part of the anti-communist left of the labor movement.  He was happy to expel the Reds from the CIO in 1949 and merge with the much more conservative AFL not long afterward.  This also obliterated the UAW’s chief rival, the communist-dominated Farm Equipment Workers Union.  Then, by the late 1950s, American unions were rolling in money from their dues and pension funds.  They scarcely knew where to put it all.  The Teamsters famously lent it to mob associates to build Las Vegas.

Reuther’s UAW, thanks to all those booming Detroit assembly lines, had more money than anyone, and he meant to use it to transform America into what he understood was the worker’s paradise of Sweden.  Millions in union grant money went to his pet projects and activists.

Martin Luther King and his Southern Christian Leadership Council would have been but a footnote in American history without the UAW’s money and people helping him.  This allowed MLK to organize the enormous marches and protests that made him famous.  MLK even became something of a Reuther disciple in his later years, embracing Scandinavian economic ideas.  Reuther also got the far-left SDS and Tom Hayden going, organizing a youth movement at the UAW’s resort complex at Port Huron in 1962.  Just about every Alinsky-style group in America was eventually getting UAW money.

And then Reuther convinced LBJ to have the federal government fund the massive Great Society programs.  Unlike the New Deal, where federal dollars were distributed directly through government agencies, thanks to Reuther, the Great Society was run in large measure in partnership with non-profit groups on the left, from older organizations like Planned Parenthood to new Alinsky-style inner-city groups funded by the Community Action Agency.  The outfit Obama worked for in Chicago is a good example.  Even at the time, old-school Democrats like Mayor Richard Daley saw the danger of CAA funding so many radical groups, with no real political constituency or accountability.

But it was too late.  A vast network of activist groups grew in every state, with their billions in federal grant money, union support, and private corporate foundations, to swallow up local party Democrats one after another.  In effect, the “mules,” the foundation-funded activists, have replaced the donkeys of the old party.

So that’s what we see today, the culmination of mega-rich woke foundations creating a political party in their own image.  The modern Democrat party, led by Joe Biden, has become nothing but a Potemkin façade, with no real organic constituency.  It doesn’t even matter to them if the Democrat lose a lot of elections from here on out.  Their massive endowments keep paying the bills for their luxury lifestyle.  The Democrat party is just a flashy “loss leader.”

Several cycles of defeats may eventually lead to a new generation of actual politicians wanting to reclaim the party from the foundations.  But that is a long way off.  The foundation mule Democrats don’t seem to have a winning future.

As an old Republican philosopher once remarked, the mule has neither pride of ancestry nor hope of posterity.

Frank Friday is an attorney in Louisville, KY. 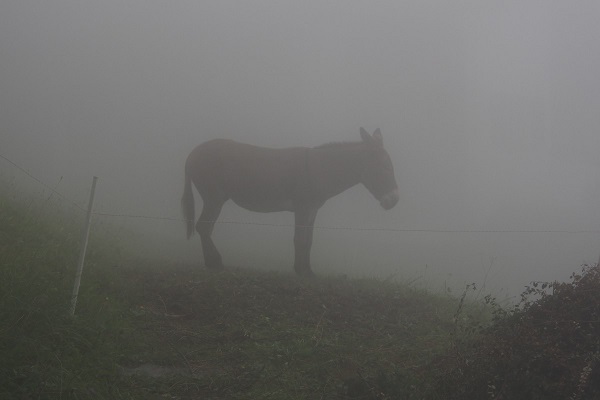