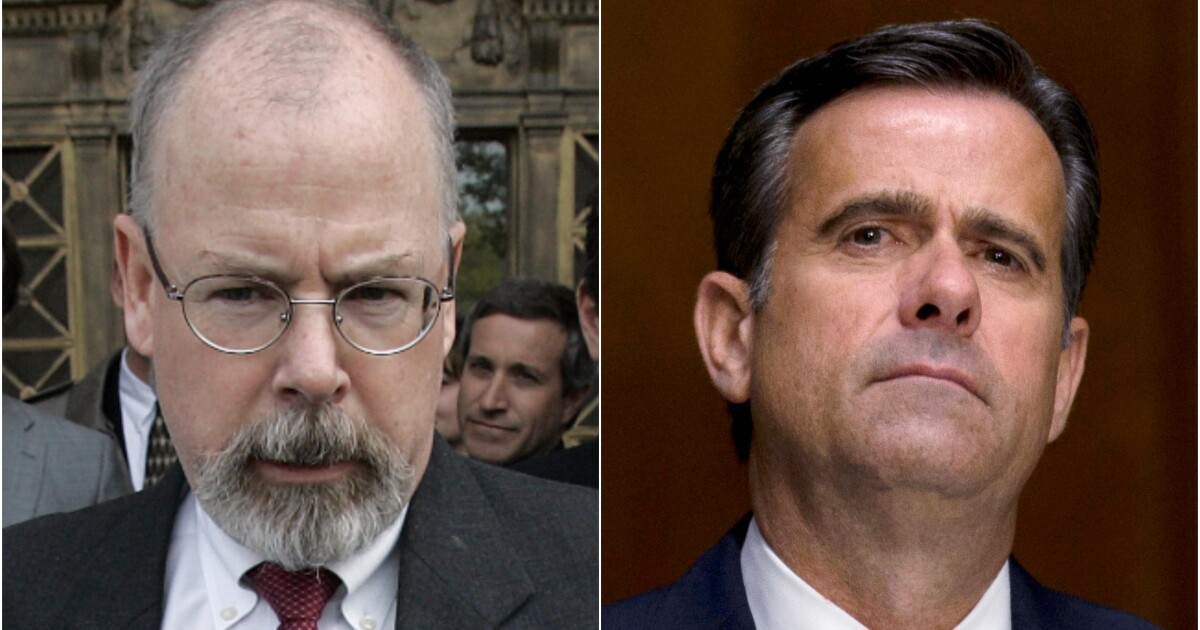 The Trump-era spy chief made a prediction on Fox News’s Sunday Morning Futures that Durham setting his focus on British ex-spy Christopher Steele’s now-discredited anti-Trump dossier will serve as a turning point after critics piled on when the Sussmann trial ended in acquittal.

“I’m optimistic that not only will he [Durham] be successful in some of the ongoing prosecutions, but can expand the indictments that he wants to bring given the involvement of certain FBI officials in spreading a false narrative to the American people,” Ratcliffe told anchor Maria Bartiromo.

Sussmann was charged with lying to the FBI about whom he was representing when, in September 2016, he presented internet data that suggested a now-discredited link between Trump and Russia’s Alfa-Bank. In particular, Sussmann was indicted on charges of concealing his clients — Clinton’s 2016 presidential campaign and “Tech Executive-1,” known to be former Neustar executive Rodney Joffe — from FBI general counsel James Baker. Sussmann denied lying to the FBI and pleaded not guilty.

The jury in Washington, D.C., sided with Sussmann on Tuesday. “Despite being falsely accused, I believe that justice ultimately prevailed in my case,” Sussmann said in a brief statement after the verdict.

Ratcliffe opined there was not a “just” verdict, bemoaning how the judge would not allow certain evidence of the “Clinton conspiracy” to be included in the trial. He also griped about there being Clinton donors on the jury and the revelation that one juror’s daughter was on the same high school crew team as Sussmann’s daughter.

This Alfa-Bank matter tied to the Clinton team may not have spurred the FBI’s investigation into Trump’s links to Russia, but the actions taken by some bureau officials over the course of that inquiry have come under increased scrutiny thanks to disclosures during the trial.

“We learned that a senior FBI agent involved in the Trump-Russia investigation, Joe Pientka, sent a note to another agent about the Alfa-Bank tip: ‘People on the 7th floor to include Director are fired up about this server. Reachout and put tools on … it’s not an option — we must do it.’ The FBI building’s seventh floor is where top management, including then-Director James Comey, had offices,” the Washington Examiner’s Byron York wrote Tuesday.

Durham has one other active prosecution: a case against Igor Danchenko, a key source for British ex-spy Christopher Steele’s anti-Trump dossier, who has pleaded not guilty to five counts of making false statements to the FBI about the information he provided to the former MI6 agent for his discredited dossier. That trial is slated to start in October in Virginia. The prosecutor has obtained a single guilty plea, which came from former FBI lawyer Kevin Clinesmith, who admitted to altering an email about a Trump campaign aide under government surveillance.

Durham was appointed by then-Attorney General William Barr in 2019 to conduct the review of the Russia investigation. Although Durham left his role as U.S. attorney after the Trump administration ended, the Biden administration let the inquiry continue after Barr appointed him special counsel. The endeavor has been criticized by Democrats and some legal observers, who claim the inquiry is meant to undercut Robert Mueller’s special investigation into ties between the Trump 2016 campaign and Russia.

Critics have turned up the pressure on Attorney General Merrick Garland to pull the plug on the inquiry, especially after the Sussmann verdict, but Ratcliffe argued that Durham’s team is “winning the war.”

Ratcliffe, a former Republican congressman from Texas who oversaw the nation’s 17 intelligence agencies in the latter part of the Trump administration, contended that testimony during the trial vindicated documents he declassified while in office.

In making his point about expanded indictments, Ratcliffe said the “most powerful” testimony during the trial came from Robby Mook, the campaign manager for Clinton in 2016, who said the candidate personally signed off on sharing the Trump-Russia allegations related to Alfa-Bank with the media during the election. Ratcliffe also noted testimony from Marc Elias, the top lawyer for Clinton’s 2016 presidential campaign, about his role in pushing collusion claims.

The Trump-Russia inquiry began in late July 2016 after Trump campaign foreign policy adviser George Papadopoulos bragged to an Australian diplomat that he heard the Russians had damaging information on Clinton. The FBI’s counterintelligence investigation, dubbed “Crossfire Hurricane,” was later wrapped into special counsel Robert Mueller’s investigation into Russian election interference. Mueller’s team did find contacts between the Trump campaign and Russia but was unable to establish a criminal conspiracy between the Trump team and the Kremlin.

Justice Department Inspector General Michael Horowitz determined there was sufficient cause for the FBI’s counterintelligence investigation into the Trump campaign, but both Barr and Durham publicly disagreed with that conclusion in late 2019.

Standing by his statement more than two years ago, Barr said during a Fox News interview on Wednesday that Durham has “accomplished something far more important” than obtaining a conviction in the Sussmann case.

“First, I think he crystallized the central role played by the Hillary campaign and launching as a dirty trick the whole Russiagate collusion narrative and fanning the flames of it,” he said. “And, second, I think he exposed really dreadful behavior by the supervisors in the FBI, the senior ranks of the FBI, who knowingly used this information to start an investigation of Trump and then duped their own agents by lying to them and refusing to tell them what the real source of that information was. And that was appalling.”

Espousing a similar point of view, Ratcliffe on Sunday asserted there was a “deliberate effort” by certain federal law enforcement officials to “mislead the American people for political reasons.”