We must identify and expose woke thinking for what it is: a perverse attack by progressive activists on traditional American values.

Another name for “woke” is “warped,” or better yet, “perverse.”  A recent book, Vivek Ramaswamy’s Woke, Inc.: Inside Corporate America’s Social Justice Scam (New York and Nashville, 2021), addresses that perverse privileging of special identity groups and of the influence that accrues to these so-called “stakeholders.”

At the beginning, Ramaswamy declares that he considers wokeness a “social justice scam.”  By “scam,” the author implies a quid pro quo on the part of those radicals who, in return for grants, positions, access, honors, and sometimes outright graft, agree to withhold their accusations of wrongdoing from various politicians, corporate leaders, foundations, and wealthy individuals.  Those who fail to pony up are charged with any number of crimes against “the oppressed,” who then parlay their supposed weakness into a frightful strength that shifts the onus of truth onto the accused and renders them virtually impregnable.  So powerful is that shield of weakness that few entities or individuals dare attempt to defend themselves against their woke accusers.  Rather, they stay silent and pander, however fraudulent and unfair the accusations may be.

For this reason, it seems, the Black Lives Matter Network Organization was able to raise $90 million in donations in 2020 alone.  Significantly, this was the first time in its eight-year history that BLM disclosed its finances, and what the disclosure revealed is a nonprofit organization that, according to a statement (“tell no lies”) by its ten local chapters, seems consistently undemocratic, exclusive, and non-transparent in its dealings.  The behavior of some associated with BLM would seem to be a good example of what Ramaswamy means by a “social justice scam” — in this case, a non-profit organization that promised to use a windfall of contributions following the George Floyd case “to reinvest into black communities” while apparently putting some of that money into the pockets of the organization’s leaders and their associates.

BLM has positioned itself as a “stakeholder” in many debates involving large amounts of money.  For Ramaswamy, this sort of behavior raises questions concerning the distinction between shareholder and stakeholder capitalism, a distinction that facilitates corporate donations to radical woke organizations or politicians in return for immunity from charges of Big Corporate Greed.

The problem with stakeholder capitalism, as Ramaswamy sees it, is that corporations no longer fulfill their chief obligation to shareholders and to society — that is, they invest in a manner that ignores the interests of actual owners and of society at large.  Of course, the very idea of “ownership” is anathema to the woke crowd, who are not merely socialists, but radical communists.  Stakeholder capitalism involves an unholy alliance between corporations and various professional activists — social justice campaigners, environmental groups, politicians at home, and foreign leaders — at the expense of those too weak or poorly organized to count, including the investors who actually own publicly traded corporations.

More important, Ramaswamy demonstrates how wokeness threatens democracy by replacing democratic representation with governance by corporate and bureaucratic elites.  The 2008 housing debacle was caused by misguided and corrupt government policies that pressured banks into making undocumented loans to low-income home-buyers.  Afterward, to cover up its irresponsibility, progressive government shifted the role of governance to corporations that were willing to back progressive causes in return for lax oversight.  Thus, corporations continued to back “equity” in housing, hiring, and promotions, as well as other matters, even after government promotion of such schemes had led to the greatest financial crisis since the Great Depression.  It appears that the bubble in ESG investments is just another example of market distortion resulting from the intrusion of ideology.

Ramaswamy also shows how woke politics aids autocratic leaders abroad as foreign dictatorships shape woke policy at U.S. corporations.  For example, the Chinese Communist Party encourages U.S. companies to contribute to woke causes domestically while scrupulously prohibiting those same companies from speaking out against Chinese abuses. The NBA and Disney are businesses that appear to avoid making any critical comments against the CCP and that may self-censor and adjust their content to comply with Chinese demands.  As Ramaswamy puts it, “Wokenomics whitewashes the abuses of dictators abroad while condemning the actions of government at home” (169).  But these abuses by U.S. companies in the service of dictators abroad are masked by their vocal and quite public support for woke causes.

It is not just overseas corruption in which U.S. corporations are involved.  Tech companies trade a willingness “to do the government’s own bidding” (212) in terms of censorship and support for progressive causes in return for exemption from libel laws and other regulations that commonly apply to other businesses.  We now live in a country in which “Big Tech censorship is state action disguised as private action” (213), and that censorship is getting worse every election cycle.

Most damaging may be that wokeness “steals our identity” by defining individuals by their race, sex, or other biological factors and not by their merits and common humanity.  In this regard, wokeism acts like a cult that seeks the total allegiance of its members.  The Church of Diversity is the most powerful church of our time, and those who oppose it or attempt to remain agnostic are punished in the same way that earlier religions punished heretics: through excommunication, shunning, loss of income or professional status, and even violence.  CEOs at major corporations find it impossible to continue serving without signaling support for the woke agenda.  And politicians find that they must promote a progressive agenda to advance their careers.

Ramaswamy’s analysis of the pervasive role of woke thinking in modern America is impressive.  I do not agree with all of his suggestions — for example, his idea of requiring four summers of national service on the part of all U.S. teenagers.  Ramaswamy believes that civic service would expose teens to those from different backgrounds, thus building a sense of common American values, but it could just as easily serve as a locus of indoctrination and peer pressure.  Nor is Ramaswamy’s suggestion that FDR’s CCC would make a good model for national service very reassuring, given the failure of so many of FDR’s employment and educational schemes.  For those young people who wish to serve their country, conventional military service remains an attractive option.  Another rewarding kind of “service” is employment within a shareholder-friendly or privately held corporation.

Another caveat concerns the author’s interpretation of E Pluribus Unum, an idea that Ramaswamy sees as a bedrock element of American identity.  Unfortunately, he misinterprets this important concept as meaning “the idea that from many [identity groups], we Americans become one” (326).  That diversity-based reading is not what E Pluribus Unum meant for two hundred years or was ever intended to mean.  It is remarkable that a person as well informed as Ramaswamy should not know that E Pluribus Unum is a phrase that applied to the unity of the original thirteen states, not to the unity of peoples from different ethnic and “gender” backgrounds.  This gaffe shows just how pervasive the warped woke thinking has become: it even seems to have infiltrated the thinking of its most ardent critic.

Despite a few such difficulties, Woke, Inc. is an extraordinary accomplishment, and it points the way each of us must travel in rejecting woke thinking at every turn.  We must identify and expose woke thinking for what it is: a perverse attack by progressive activists on traditional American values.  Wokeism has already prevailed in America’s universities, media, and corporate boardrooms; it’s only the innate conservatism of the American public and a few public outfits that stand in its way.  If they prevail, woke supporters will remake America into a communist totalitarian state in which every person is judged by his supposed degree of oppression and in which the concept of “ownership” will no longer exist.  In that future, there will be no place for individual liberty or constitutional limits on government power.  That state of tyranny is the ultimate goal of woke ideology.

Jeffrey Folks is the author of many books and articles on American culture and politics. 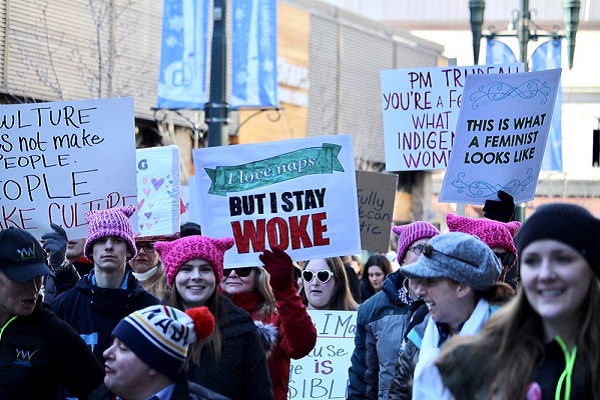