The Jewish people are not “settlers” in land that already belongs to them from time immemorial.

When did it become an accepted truism that peace between Israel and the Arabs who call themselves Palestinians requires that Israel give to them its very own Biblical birthright in the Jewish heartland? When did the Oslo Accords supersede the eternal possession of the Jewish people to that God-given heartland of Judea and Samaria, the territory a hostile world insists on calling by its illegitimate Jordanian name; the West Bank?

Who are they who dare divide the land that the Almighty bequeathed to Abraham and to his descendants through Isaac and Jacob? Who are they who would give any part of tiny Eretz Yisrael (the Land of Israel) to the alleged descendants of Ishmael, who possess vast territories throughout the Middle East and North Africa?

Judeophobes (aka Anti-Semites) may not like being told this, but the following facts are truths that cannot shrivel away.

Unlike the deeply appreciated last incumbent of the White House, President Donald J. Trump, too many previous U.S. presidents displayed pro-Muslim Arab policies, which created clear and present dangers to the very existence of the reborn Jewish state. It is thus with the present Democrat president, Joe Biden. He, like his malign handlers, should take note of Genesis 12:3.

And then there was Barack Hussein Obama, whose hatred of the Jewish state surpassed even that of the lamentable Jimmy Carter. Remember Obama’s Secretary of State, John Kerry? He came numerous times to pressure and threaten Israel, thus ushering in an even more baleful time for the embattled Jewish state.

The so-called Palestinian Authority was encouraged by Kerry and Obama to harden its demands to insufferable and arrogant levels. It required Israel to essentially commit national suicide. And how many times did we hear Mahmoud Abbas, the Holocaust-denying leader of the fraudulent Arabs who call themselves Palestinians, tell Kerry that the ‘Palestinian Arabs’ will never accept Israel. So much then for a delusional peace!

Kerry insisted, as he stood shoulder to shoulder with Abbas, that Israeli “settlements” are illegal. He deliberately used the pejorative term, “settlements” to demean and delegitimize Jewish villages and towns. The PA and the PLO, along with the Iranian-funded and supported Hamas and Islamic Jihad in Gaza, were thus encouraged to initiate more criminal violence and murder against Israelis. The Kerrys of this world have much to answer for as the Jewish death toll relentlessly mounts.

All these notions of “land for peace” and a “two-state solution” erode the millennial and inalienable rights of the Jewish people to their tiny land between the River Jordan and the Mediterranean Sea. But tragically too many Israeli left-wing politicians still allow themselves to believe in false Muslim promises (tekiyah) of peace. Do they not remember Jeremiah’s prophetic words? ”Peace, peace but there is no peace.”

Fifty-five endless years have been squandered by Israeli leaders since the June 1967 Six Day defensive war against genocidal Arab aggression. This indefensible delay in liberating the Jewish heartland has emboldened a hostile world to demonize Jewish towns and villages in Judea and Samaria (aka the West Bank). Thus, these Jewish communities are delegitimized again and again with the use of the pejorative term: “settlements.”

Remember, there has never in all recorded history ever existed a sovereign, independent state called “Palestine.” 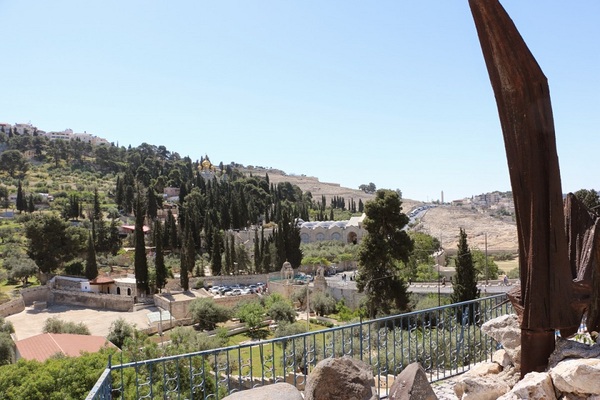 Jewish communities are not inhabited by alien “settlers.” The Jewish population of Judea and Samaria inhabit and redeem their own ancient and ancestral land. These men and women and children are not “settlers” in what is already theirs by virtue of millennial historical and spiritual attachment. Indeed, many present-day Jewish villages, especially throughout Judea and Samaria, are built upon the very Biblical Jewish sites which existed millennia ago. On the Golan, for instance, numerous sites abound where ancient synagogues existed over two thousand years ago.

I personally consider it anathema to describe Jewish communities in the Biblical heartland of Judea and Samaria with the odious term, “settlements.” For too many Israelis, as well as pro-Israelis, to continue calling them “settlements” without thinking is almost as if they have resigned themselves to demeaning ancestral and Biblical Jewish history. This is the linguistic terminology used by rank anti-Semites and those who peddle anti-Israel hatred and should never be used by Israelis or defenders of the Jewish state.

Tragically, Judea and Samaria have still not been redeemed and brought into sovereign Israel. These lands are the very warp and woof, the very fabric and fiber of Jewish history, both during and since Biblical times. The endless delay by successive Israeli governments for fear of upsetting a hostile world is to betray God’s eternal gift to His people.

As long ago as 2003, Professor Talia Einhorn wrote about Judea, Samaria, and Gaza, or as it is known by its Hebrew acronym, Yesha: meaning in Hebrew, Yehuda, Shomron, and Azza. Yehuda means Judea and yehudim is the Hebrew word for Jews. In a sane world that irrefutable connection should impress even the fraudulent Arabs who call themselves Palestinians. But, alas, this is anything but a rational world.

Simply put: The Jewish people are not “settlers” on land that already belongs to them from time immemorial. And the indigenous Jewish people cannot be called “settlers” in their very own ancestral, Biblical heartland of Judea and Samaria — or in Gaza for that matter.

Finally, the world — whether it likes it or not — must hear about the unassailable Jewish rights to the Land and not the fraudulent claims by Palestinians or from the rantings of miserable Judeophobes who infest the BDS movement, the media, and increasingly pollute college campuses.

Don’t make the job of the haters of Israel any easier. Help to honor the Jewish villagers and townsfolk living in their ancient and Biblical heartland of Judea and Samaria — often in great danger from Arab terror — by rejecting the use of the hurtful and illegitimate terms; “settlers” “settlements” and “West Bank.”

Please dignify them with appropriate words to describe the villages and towns of Judea and Samaria. After all, words have meaning and consequences.

Victor Sharpe is a prolific freelance writer and author of several published books including the four volumes of Politicide: The attempted murder of the Jewish state.