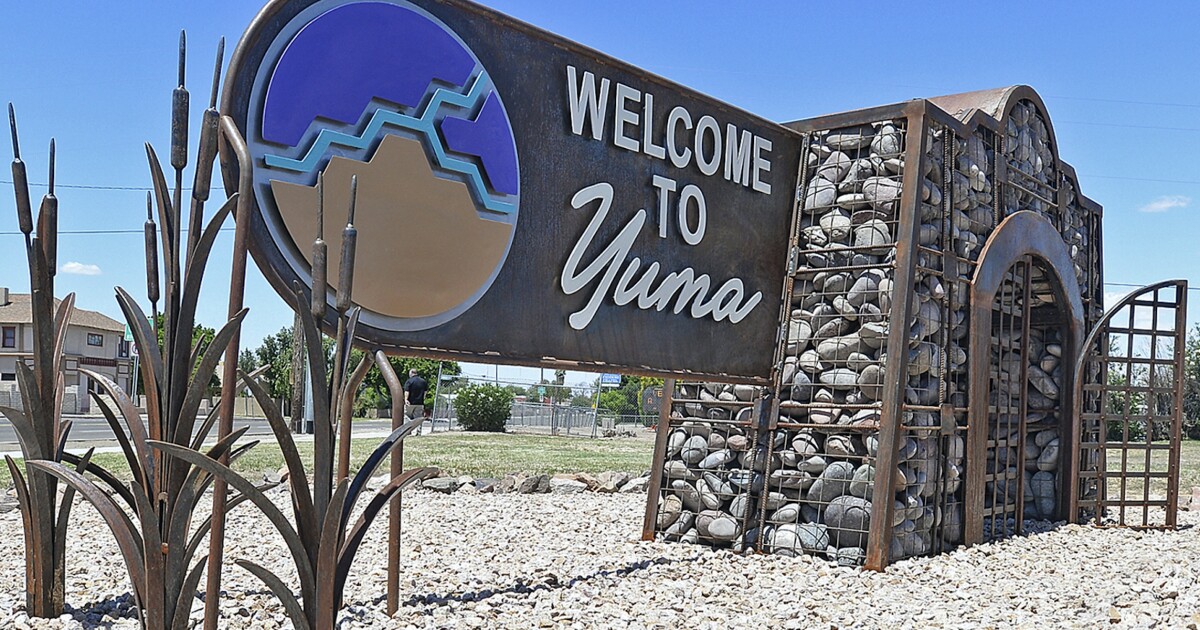 The mayor of a small city on Arizona’s border with Mexico privately pleaded with the White House and the Department of Homeland Security to stop releasing migrants into the community.

The mayor of a small city on Arizona’s border with Mexico privately pleaded with the White House and the Department of Homeland Security to stop releasing migrants into the community.

Doug Nicholls, mayor of Yuma, Arizona, told the Washington Examiner that he asked the Biden administration in closed-door meetings last week to halt all Border Patrol releases of migrants in cities and towns that have populations of less than 1 million. The move would halt nearly all releases along much of the border and instead force the federal government to transport those it wants to discharge from custody to larger cities such as Houston and San Antonio in Texas and Phoenix in Arizona.

“A good policy would be that [U.S. Customs and Border Protection] does not release into communities under a million people. There’s an infrastructure need that kind of naturally occurs at about a million people. And underneath that, it’s disproportionately impacted local communities,” Nicholls said in a phone call.

Nicholls said he didn’t receive an answer, adding that he met with the White House’s intergovernmental affairs department, top officials at CBP, and DHS officials, including DHS Assistant Secretary for Partnership and Engagement Eva Millona.

Western Arizona is one of the three busiest areas of the border in terms of the number of migrants who have been encountered by the Border Patrol after illegally crossing from Mexico in recent months. More than 149,000 people have been apprehended since October 2021, the start of the government’s fiscal 2021, up from fewer than 9,000 in all of 2020.

As apprehensions rose to all-time highs last summer, Nicholls began asking the DHS for a plan, including how the federal government would help his local government respond, as well as how it would prevent illegal migration. Given the Biden administration’s announcement in April that Title 42, a public health policy that has allowed U.S. border officials to expel illegal migrants immediately at the border since March 2020, would end in late May, Nicholls worried the number of crossings would only grow.

Any increase would come as airports and bus companies operating in Yuma are already struggling to keep up with the transportation needs of migrants who have been released into the United States after crossing the border without authorization. Yuma is a remote desert town, three hours from Phoenix. The shortages in transportation can mean that migrants have nowhere to go during the day or overnight, imposing new difficulties for Yuma, specifically as daytime temperatures creep into the triple digits this month.

In December, Nicholls declared a state of emergency after 6,000 people were encountered coming across the border in just four days. The Border Patrol was unable to respond to the number of people crossing, prompting migrants to walk into town looking for help, Nicholls said. He left the state of emergency in place for the past five months because he has “not seen anything from the administration or the secretary that looks like it’s going to change this flow.”

With no response from the federal government, Nicholls traveled to Washington to plead for an end to the releases of migrants into his town.

“They were listening. Obviously, they can’t make a call like that. That’s the secretary. There’s presidential input on that. But in reading the room, I think those that are lifelong DHS employees understood that that seems like a reasonable request,” Nicholls said.

The mayor of nine years also asked that the DHS’s Federal Emergency Management Agency stand up and oversee a transition shelter in the community to take the pressure off the city’s one nonprofit organization that has been overwhelmed feeding, clothing, and assisting migrants. FEMA is covering one-third of municipal costs related to the border. In reality, that means that when Yuma first responders were called to the border in December that was at a rate 10 times higher than normal, the city was left to cover 66% of those ambulance trips.

Title 42’s future is unknown at present. A federal judge indicated in late April that he would not allow the DHS to proceed with its plan to end Title 42 on May 23. Before, though, Republicans and some Democrats had criticized the Biden administration as failing to plan adequately for winding it down. The DHS last week released a six-point plan outlining how it would handle the expected 18,000 encounters of illegal migrants each day in the weeks after ending Title 42. Biden administration officials told Nicholls about its internal programs that are part of its planned response, though the mayor said he was not allowed to disclose them.

Nicholls is not content with what he learned of the Biden administration’s plan — increasingly to facilitate releases of migrants and to work with Latin American countries to resolve the root causes that are prompting so many to flee.

“The big global immigration challenge crisis issue … I agree that that’s a problem. However, in less than three weeks, I could be dealing with thousands of people in my community and trying to have a global conversation,” said Nicholls. “Ignoring the immediate need conversation doesn’t help my constituents. … We’re not going to change the policy overnight. I’ve got to prepare.”