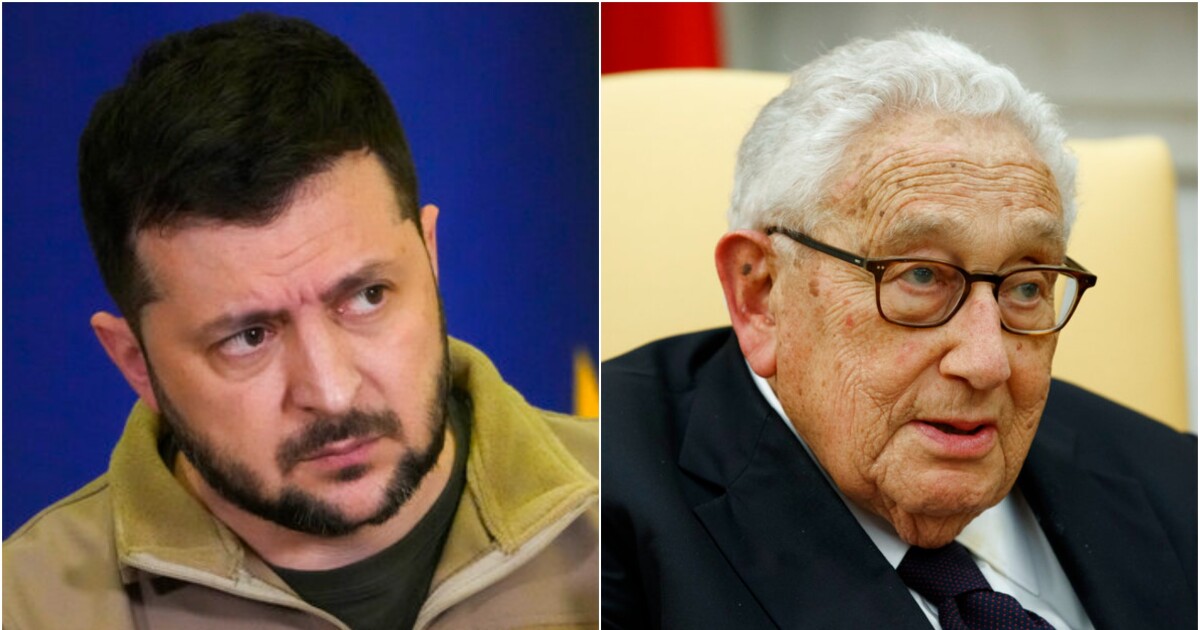 Ukrainian President Volodymyr Zelensky took aim at the New York Times and American statesman Henry Kissinger, blasting the two for suggesting that Ukraine give up territory to end the war with Russia, comparing the idea to Britain's appeasement deal with Nazi Germany in 1938.

Ukrainian President Volodymyr Zelensky took aim at the New York Times and American statesman Henry Kissinger, blasting the two for suggesting that Ukraine give up territory to end the war with Russia, comparing the idea to Britain’s appeasement deal with Nazi Germany in 1938.

In his nightly address on Wednesday, Zelensky referenced Kissinger’s remarks at the World Economic Forum in Davos, Switzerland, on Monday, in which the former secretary of state said Ukraine should negotiate a deal with Russia to return “to the status quo ante,” meaning returning to the territorial lines in place on Feb. 24, when Russia began its invasion. The agreement Kissinger suggests would allow Russia to maintain control of the Crimean Peninsula and parts of the Donbas region. The Ukrainian president argued that Kissinger, who fled Nazi forces at the age of 15, should know better.

“No matter what the Russian state does, there is always someone who says: let’s take its interests into account. This year in Davos it was heard again. Despite thousands of Russian missiles hitting Ukraine. Despite tens of thousands of Ukrainians killed. Despite Bucha and Mariupol, etc. Despite the destroyed cities. And despite the ‘filtration camps’ built by the Russian state, in which they kill, torture, rape and humiliate like on a conveyor belt,” Zelensky said before taking aim at Kissinger.

KISSINGER: UKRAINE SHOULD GIVE UP TERRITORY TO END WAR WITH RUSSIA

“Mr. Kissinger emerges from the deep past and says that a piece of Ukraine should be given to Russia. So that there is no alienation of Russia from Europe. It seems that Mr. Kissinger’s calendar is not 2022, but 1938, and he thought he was talking to an audience not in Davos, but in Munich of that time,” the Ukrainian president said, referencing the 1938 Munich Agreement, in which British Prime Minister Neville Chamberlain agreed to let Nazi Germany occupy part of Czechoslovakia in an attempt to avoid war.

The Ukrainian leader also suggested that Kissinger, 98, never would have suggested to Europeans in the 1930s and 1940s to adapt to the Nazi regime.

“By the way, in the real year 1938, when Mr. Kissinger’s family was fleeing Nazi Germany, he was 15 years old, and he understood everything perfectly. And nobody heard from him then that it was necessary to adapt to the Nazis instead of fleeing them or fighting them,” Zelensky said.

The Ukrainian president also railed against “some Western media” outlets that have made similar suggestions of appeasement, singling out the New York Times.

“Symptomatic editorials began to appear in some Western media stating that Ukraine must allegedly accept so-called difficult compromises by giving up territory in exchange for peace. Perhaps the New York Times in 1938 also wrote something similar. But now, let me remind you, it is 2022,” Zelensky said.

Zelensky seemed to be referencing a May 19 New York Times editorial that suggested Ukraine taking back territory seized by Russia in 2014 is “not a realistic goal.”

“A decisive military victory for Ukraine over Russia, in which Ukraine regains all the territory Russia has seized since 2014, is not a realistic goal,” the editorial read.

Zelensky argued that those advising Ukraine to cede territory to Russia to end the war fail to take into account the civilians that live in the occupied territories and are naive to think that such a proposal would achieve lasting peace with Russia.

“Behind all these geopolitical speculations of those who advise Ukraine to give away something to Russia, ‘great geopoliticians’ are always unwilling to see ordinary people. Ordinary Ukrainians. Millions of those who actually live in the territory they propose to exchange for the illusion of peace. You must always see people. And remember that values are not just a word,” Zelensky said.