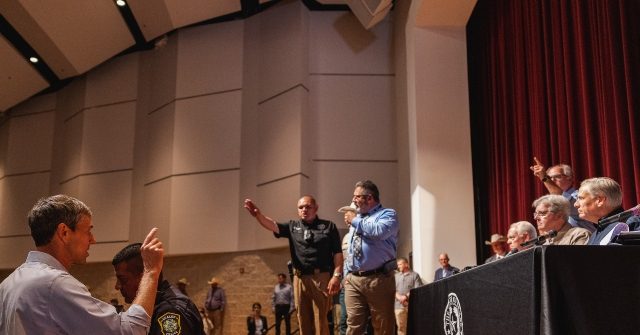 Beto appears to wait until the governor’s remarks are complete before he stands in front of the stage to interrupt Lt. Governor Dan Patrick’s presentation. Patrick attempts to shut down the Democratic Party candidate for Governor, saying, “Excuse me, you’re out of line and an embarrassment.”

O’Rourke continued to talk over the Lt. Governor to address Governor Abbott. “You’re doing nothing,” the failed presidential and senatorial candidate said.

Uvalde Mayor Don McLaughlin was most vocal in trying to shout down the interruption. Texas Senator Ted Cruz can also be heard trying to hush Beto.

“I can’t believe… you’re a sick son of a bitch,” the mayor continued, “that would come to an event like this to make political issues.”

“It’s on you,” O’Rourke said pointing at Abbott. McLaughlin responded, “It’s on assholes like you. Why don’t you get out of here?!”

Police finally escorted O’Rourke from the room where he carried out an impromptu press conference.

The twice-failed statewide candidate received the Democratic Party of Texas’ nomination to face off against Governor Abbott in the 2022 General Election in November. He has a long history of contradicting positions on the 2nd Amendment and gun control.

During a Democratic Party presidential candidate debate in September 2019, O’Rourke responded to a question about his support of gun confiscation. “Hell yes, we’re going to take your AR-15, your AK-47,” the candidate stated. A few days later, he backtracked and told CNN he would not confiscate hunting rifles. When then-CNN show host Chris Cuomo asked O’Rourke, “Are you, in fact, in favor of gun confiscations?” The candidate replied, “Yes,” and then added, “But when it comes to firearms used for hunting or self-defense the answer is ‘no.’ And I don’t want you or anyone else to get into the fear mongering, that some have fallen prey to, saying that the government is going to come and take all your guns.”

A month later he predicted that if the law banned certain guns, he believed Americans would simply hand them over. “What we expect of our fellow Americans is when something like this comes into law, they will follow the law,” he explained.

After dropping out of his failed presidential campaign, O’Rourke set his sights on the Governor’s Mansion in Austin and doubled down on his threat to take away certain guns, and bashed the State of Texas for passing constitutional carry.

Fast forward to the 2022 election cycle, where O’Rourke is slated to face off against the two-term Texas governor. The never-ending policy shift on O’Rourke’s thoughts on gun control took another turn when the candidate addressed a group of supporters in conservative East Texas and said he is “not interested in taking anything from anyone.”

O’Rourke shifted from taking your guns to buying back these types of guns, Breitbart News reported.

Bob Price serves as associate editor and senior news contributor for the Breitbart Texas-Border team. He is an original member of the Breitbart Texas team. Price is a regular panelist on Fox 26 Houston’s What’s Your Point? Sunday-morning talk show. Follow him on Twitter @BobPriceBBTX and Facebook.