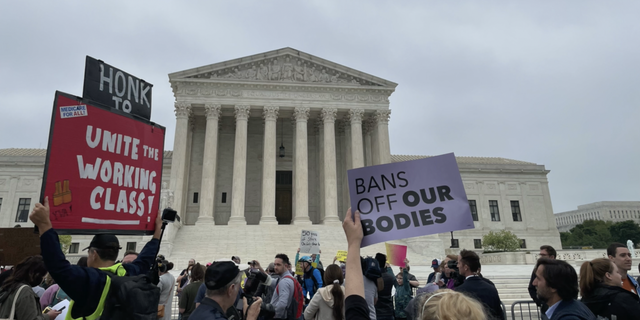 Videos of the protesters flanked by cameramen showed people marching up and down the street chanting slogans like: “our bodies, our voice!” and “Alito is a coward!”

Some members of the crowd carried a banner that read: “Repro Freedom For All.”

The political group Shut Down DC said it would be organizing a vigil outside Justice Alito’s home because “it’s been impossible to reach him at the Supreme Court.”

The group argued that with Justice Alito’s draft opinion, not only was abortion on the line but “could also be used to allow states to outlaw contraception, same-sex marriage, protections for LGBTQ folks, and even interracial marriage.”

REPORTER CALLS FOR VIOLENCE AGAINST PRO-LIFERS, SAYS THEY SHOULDN’T HAVE ‘PEACE OR SAFETY’ UNTIL THEY’RE DEAD

The demonstration came after the Senate passed legislation to beef up security for Supreme Court justices, ensuring they and their families are protected as the court deliberates abortion access and whether to overturn the landmark Roe v. Wade decision.

The bipartisan bill aims to put the court on par with the executive and legislative branches, ensuring the nine justices are provided security as some protesters have gathered outside their homes. The bill now moves to the House for its consideration.

The legislation is a technical change that allows Supreme Court law enforcement to provide around-the-clock security to immediate family members, in line with protection for certain people in the executive and legislative branches.

Protests have erupted in front of the Supreme Court and around the country after a leaked draft opinion suggested the court was poised to overturn Roe v. Wade.