I've learned some things when it comes to fatherhood that I would like to pass on.

I’ve by no means been the perfect father.  I’ve made countless mistakes and almost certainly have other mistakes — though I hope far fewer — awaiting me.  Through my personal experiences, through the numerous wise men and women with whom God has graced my life — especially my parents and my wife’s parents — and above all, through the wisdom of God, I’ve learned some things when it comes to fatherhood that I would like to pass on.

There’s probably no quicker way to destroy a marriage these days than through sexual immorality.  C.S. Lewis was right when he wrote, “There is no getting away from it: the old Christian rule is, ‘Either marriage, with complete faithfulness to your partner, or else total abstinence.'”  Lewis was also correct when he noted that this is the most unpopular of all the Christian virtues.

Lewis wrote those words in the middle of the 20th century, many years prior to the rampant spread of pornography and the evil LGBTMYNAMEISLEGION agenda, and decades before the internet.  In other words, as unpopular as chastity was when Lewis was speaking and writing on such matters, given how easy and acceptable it is today to live contrary to God’s teaching on sex and marriage, it is even more unpopular now.  Yet the truth remains.

Be faithful to your wives, men, before and during marriage.  Flee from pornography and the like.  Seek reliable sexual accountability before and during marriage.  Have no secrets in this area from your wife.  Make sure she has complete access to every digital device you own.  If and when you fail — and you almost certainly will have some failures — confess, repent, and seek help if necessary.  Also, model and teach your children the truth in these grave matters.

Spend Time with Your Family

I’ve been blessed with many friends throughout my life.  However, there is no one I would rather spend time with than my wife and kids.  I almost never “hang out” with anyone other than my family.  Not that there’s anything inherently wrong with friends outside of your family, but always make your family the priority.  Do what they enjoy, even if it conflicts with what you would rather do.

Love is far more than what we feel or say.  Let your actions communicate your love for your wife and children.  Time is a precious commodity.  Spend it abundantly on your wife and kids.

One of the greatest lessons I learned from my father is the value and importance of hard work and providing for one’s family.  In their early years, our children most need time with their mothers.  It is tremendously important that men do all possible to allow for this.  By American standards, Michelle and I are far from wealthy.  Throughout our marriage, the vast majority of our income has come from my work as a teacher of mathematics.  Typically, one doesn’t get wealthy through working as a teacher.

Nevertheless, from the moment Caleb was born — over 20 years ago — until today, with rare exception, Michelle has been a stay-at-home mom.  She has been able to earn some income working from home, and she has, at times, now that our kids are older, worked outside the home.

However, it has been more common for me to take on extra work.  For most of the past decade, as life has gotten more expensive, and in order for Michelle to remain at home, I have worked multiple jobs.  We still can’t afford to purchase new cars, and we don’t take fancy vacations and the like, but we are able to provide our children with far more than what most kids across the world receive.  Most importantly, our kids have grown up with their parents present in their lives and are very close to us and one another as a result.

No doubt you’ve encountered the notion of “toxic masculinity.”  For the most part, this is simply another attack from the modern left on traditional Christian values.  As Ben Shapiro wrote in 2017,

[t]he goal of the Left, therefore, becomes to train boys not to become men. Instead, boys should be feminized; they should never be encouraged to “be a man.” …

If men are not trained by good men, they will be trained by bad men; if they have no good males to follow, they follow bad ones. The Left routinely speaks about a world run by women and why such a world would create better men. But the most male-free environment in America exists in black communities, where well over half of black children grow up without fathers. This hasn’t made black boys less violent; it’s made them far more prone to criminality than their non-black peers. Many of these boys follow teenage role models, many of whom have lacked fathers themselves, and lack the training to be a gentleman.

To “be a man,” it is important to remember that this is about not just physical strength and hard work, but about being a “gentleman”: being patient, kind, giving, and above all loving.  Got Questions puts it this way:

A true man is someone who has “put away childish things.” A true man knows what is right and stands firm in the right. A true man is a godly man. He loves the Lord, he loves life, and he loves those whom the Lord has entrusted to his care.

Be a Good Husband

As I’ve often pointed out, the biblical family model is at the foundation of every institution in the history of humanity.  Thus, the importance of the family is paramount. Of course, the enemy of all mankind knows this well.  This is why I believe that the hardest two jobs in the world are being a good parent and being a good spouse.  As I’ve often said before, after our relationship with our Creator, the most important relationship in the universe is the relationship between a husband and his wife.

In other words, men, if you want things right between you and your children, you need to have things right with your wife.  Prioritize your relationship with your wife!  Your children need to see a proper, loving, healthy relationship with their parents.  This will bring them much peace and joy (whether they even realize it at the time or not) and will be a tremendous help to them as they embark on their own marriages.

The greatest model for what it means to be a good earthly father is the model provided for us by our heavenly Father.  Christians believe that God sent His “one and only Son,” Jesus Christ, into the world to save the world.  God gave of Himself in the most precious way possible in order to do for those He loves what it was impossible for us to do for ourselves.

God’s greatest gift met humanity’s most desperate need.  In His earthly walk, Jesus modeled love, forgiveness, patience, kindness, generosity, strength, wisdom, and so on, like no else who has ever lived or will ever live.  The more you are like Him, the better a husband and father you will be.

Trevor Grant Thomas
At the Intersection of Politics, Science, Faith, and Reason.
www.trevorgrantthomas.com
Trevor is the author of the The Miracle and Magnificence of America.
[email protected] 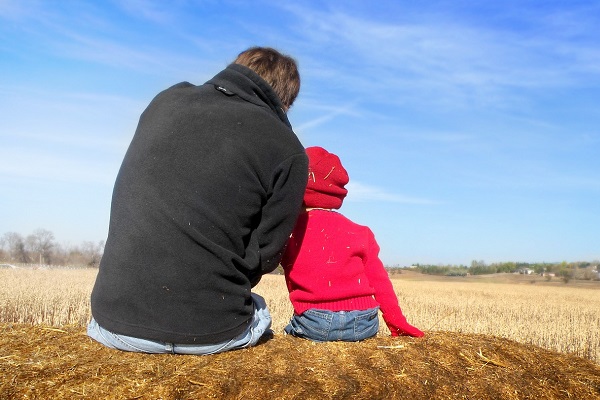