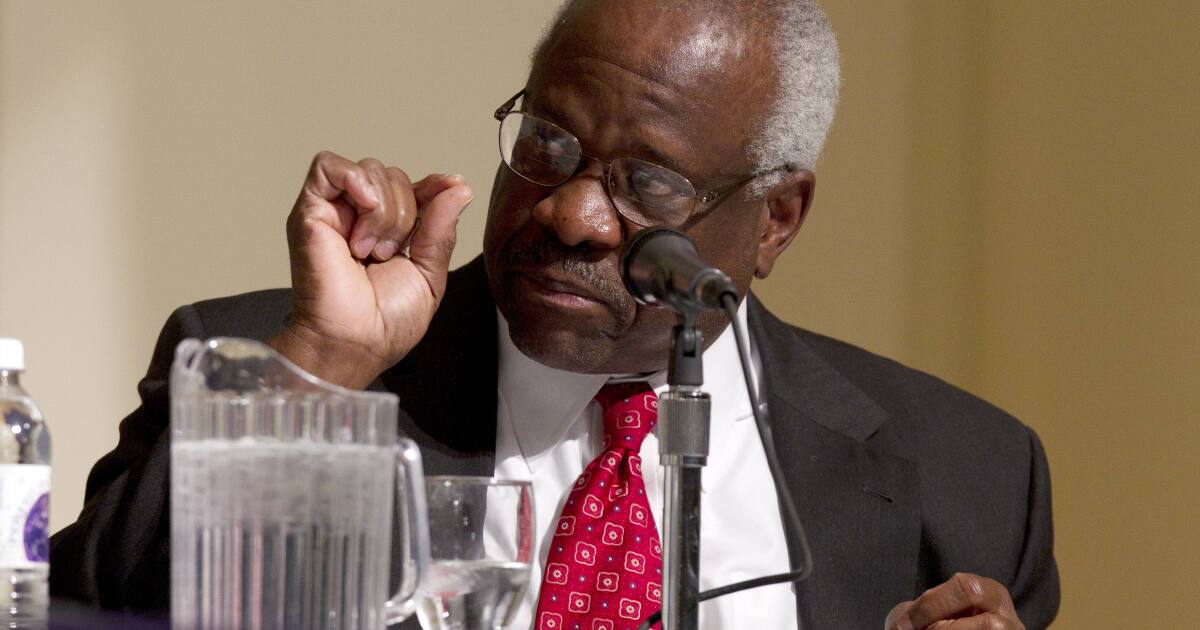 Days after a Supreme Court opinion leaked and signaled the possible overturning of a long-standing precedent for women's abortion access, Justice Clarence Thomas declared that the high court cannot be "bullied."

Days after a Supreme Court opinion leaked and signaled the possible overturning of a long-standing precedent for women’s abortion access, Justice Clarence Thomas declared that the high court cannot be “bullied.”

Thomas, the longest-serving justice on the Supreme Court now and an appointee of former President George H.W. Bush, briefly referenced the past week of protests in Washington and across the nation over the leaked draft majority opinion during the 11th Circuit Judicial Conference on Friday.

“We can’t be an institution that can be bullied into giving you just the outcomes you want. The events from earlier this week are a symptom of that,” Thomas said amid public protests, including some outside the Supreme Court, by abortion activists concerned over the upheaval of Roe v. Wade and Planned Parenthood v. Casey.

The leaked draft, authored by Justice Samuel Alito, ignited calls this week to codify Roe into law. Some liberal lawmakers, such as Rep. Ilhan Omar (D-MN), are escalating their push to expand the number of justices on the nine-member court.

As a society, “we are becoming addicted to wanting particular outcomes, not living with the outcomes we don’t like,” Thomas said during a Q&A session at the Atlanta-based event.

Since the leak on May 2, the Supreme Court has verified the authenticity of the draft report but has stated it is not a final rendition of the looming opinion. If the final ruling for Dobbs. v. Jackson Women’s Health Organization is unaltered, it would uphold a Mississippi law banning abortions after 15 weeks of pregnancy and overturn the landmark 1973 Roe decision that made abortion procedures legal throughout the nation.

A pro-abortion rights protest group that claims to carry on the legacy of the late Supreme Court Justice Ruth Bader Ginsburg said it would fund protesters to participate in demonstrations next week outside the homes of the six Republican-appointed justices in response to the court’s expected ruling to overturn Roe.

Tall security fences and concert barriers have been placed around the Supreme Court since the leak. Alito canceled an appearance at a similar event.

Thomas has long been a vocal opponent of the precedent set by Roe and even called for its overturning during arguments over Casey in 1992. However, he did not link his comments to the present national discussion surrounding Roe.

“We use stare decisis as a mantra when we don’t want to think,” Thomas said at the conference.

Alito notably wrote in the drafted Dobbs opinion that the court has “long recognized” that stare decisis, the legal principle that courts follow precedent, is “‘not an inexorable command,’ and it ‘is at its weakest when we interpret the Constitution,'” according to a copy of the draft opinion.

A former high court clerk for Alito, University of Notre Dame law professor Sherif Girgis, told the Washington Examiner on Friday that Thomas would “presumably have the assignment power” to write the decision in a case such as Dobbs despite Alito’s authorship in the leaked draft.

Though Girgis described Thomas as having “views about substantive due process that he’s unlikely to get four other votes for.”

Thomas said he was glad to be the justice who presides over emergency requests from the 11th Circuit, which comprises Georgia, Florida, and Alabama.

He added that the one thing he had to learn in New England was “bad manners.”