America's foreign-policy establishment wants to reassure Putin that nothing has changed.

The Institute for the Study of War has been providing expert assessments of the conflict in Ukraine. Its May 20 report included the observation that “Russian forces reportedly are holding defensive positions north of Kharkiv City following the success of the Ukrainian counteroffensive since May 5 and have conducted limited spoiling attacks either to give Russian forces time to complete their redeployment back to Russia in good order or to allow reinforcements to arrive to defend territory in Kharkiv Oblast.” Russian president Vladimir Putin’s expectation that it would only take five days to reach the Ukrainian capital of Kyiv and that the people of Ukraine would welcome a return to the Russian Empire has proven a bloody fantasy. Roughly half the Russian invasion force was aimed at Kyiv. It took heavy casualties and has withdrawn back across the border to regroup and redeploy to reinforce the battered units retreating from Kharkiv. Only in the south and east, where Moscow’s best units have been operating from territory held before February 24 (Crimea, Donetsk and Luhansk), are the Russians still undertaking minor offensive actions. Even in the Kherson area at the head of the Crimea the Ukrainians are counterattacking.

At the Hudson Institute, the best “conservative’ think tank in Washington on foreign and defense policy, the call has shifted from helping Ukraine defend itself to helping Ukraine win. A recent paper argues “The U.S. goal should be to end the war quickly to stop the suffering of Ukraine’s people and allow its economic recovery. To that end, Ukraine must be equipped to carry out a punishing counteroffensive in defense of its sovereignty and compel Russia to contrive an off-ramp.”

Unfortunately, the foreign-policy establishment sees an “off-ramp” for Russia in a different way. They believe Putin must be offered the carrot of the strategic victory he was aiming for when he sent 60,000 troops towards Kyiv. Putin wanted to install a puppet government to tie Ukraine to Moscow, as is true of Belarus. That failed, but his central priority is still to keep Ukraine from joining NATO, a move that would shut the door to renewed Russian expansion. That the liberal establishment in the West has sought to appease Moscow for decades by leaving Ukraine in the open has resulted in what appeasement always does; it served as an invitation to Putin to invade. In Putin’s eyes the independence of the Baltic States is just as illegitimate as Ukraine’s. The Baltic States would have also been easier to overrun. But he dares not attack them because they are NATO members. In the run-up to the current war, Putin tested the waters with a lengthy deployment of troops to see what the Western reaction would be. When President Joe Biden assured him that Ukraine was outside the U.S.-NATO security perimeter and no Western military forces would intervene, he attacked.

Now, the establishment wants to reassure Putin that nothing has changed. Thomas Graham at the Council on Foreign Relations advises “The United States should… forgo expansion into the former Soviet space for an extended period. No one believes that any former Soviet state will be ready for membership for years to come. Without necessarily abandoning the Open Door policy, the alliance should make clear that it will not expand eastward.” George Beebe, Director of Grand Strategy at the Quincy Institute for Responsible 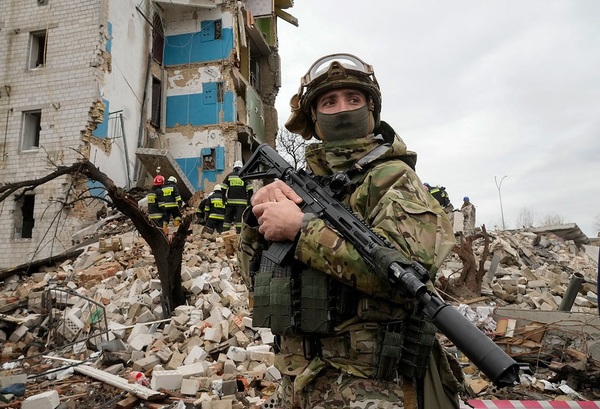 Statecraft, writes “To encourage the Russians to end the fighting, we must face the painful reality that they need a viable path toward a future in which sanctions are eased and NATO is not in Ukraine, while at the same time safeguarding Ukraine’s security.” Beebe was once an advisor to Vice President Dick Cheney but now works for a think tank funded by leftist George Soros and libertarian Charles Koch which sees “the emergence of a multi-polar world in the 21st century where economic power is more evenly shared across nations.”

Events have made obsolete several suggestions for Ukrainian “neutrality” outside NATO. Audrey Kurth Cronin of American University offered Finland and Sweden as examples of well-armed neutrals that Ukraine could copy, but that was before Finland and Sweden petitioned NATO for membership as the best guarantee against Russian aggression.

Joseph Nye, Jr., a prominent foreign policy expert at Harvard University argues that China should mediate a Ukraine settlement. “As the war drags on and Western sanctions increase, there is also a danger that secondary sanctions will spill over and harm China. Providing Putin with a face-saving off-ramp could address this and the other dangers the war poses. And it would deepen Russia’s growing dependence on China and boost China’s own global image and standing. Xi might even win a Nobel Peace Prize.” Nye doesn’t mention the terms of a Beijing mediated deal but notes “Chinese official media and nationalistic websites have repeated Putin’s claims that Ukraine is a puppet of the West, and that Russia is standing up to America’s bullying of both Russia and China.” So, the outcome would not be good for Ukraine or the West. Graham Allison, also of Harvard, agrees with Nye that “China’s diplomatic position strengthens its hand as a mediator.” Allison is the author of Destined for War: Can America and China Avoid the Thucydides Trap? (my critique of this book is here) which argues that it is both dangerous and futile for the U.S. to stand in the way of China’s rise to global power. He is in the appeasement camp that believes wars are not caused by aggression but are the result of standing up to aggression.

The connection between Ukraine and China has been explicit from the start of the war. It has become tighter with President Biden’s statement in Tokyo Monday that the U.S. would fight for Taiwan if attacked by China. Beijing has been warning Taiwan that since Washington did not fight for Ukraine, it will not fight for Taiwan; the democratic island is on its own and cannot resist Chinese demands. Biden said that defending Taiwan is “the commitment we made” and that it is “even stronger’ after Russia’s invasion of Ukraine. Establishmentarians at the State Department and on the White House staff tried to walk back this direct pledge by the President. This is reminiscent of the objections by the same type of people in the same positions to President Ronald Reagan saying “tear down this wall” in Berlin. The hope is that Biden has learned from his mistakes in Europe during the Winter and is prepared to offer real deterrence in Asia in the brighter light of Summer.

The establishmentarians deal in academic theories and feel-good pontifications. They generate reams of paper on every topic except victory. The counter is the study of the real world and what it actually takes to provide for national security and the maintenance of peace in the violence-prone realm of Great Power competition. Three months of war has not concentrated as many minds as it should have, but it may have impressed the one that matters most. We’ll have to wait and see if Biden can hold the thought.

William R. Hawkins is a former economics professor who has written widely on defense and foreign policy issues for a variety of scholarly and popular publications. He has also served on the staff on the U.S. House Foreign Affairs Committee.