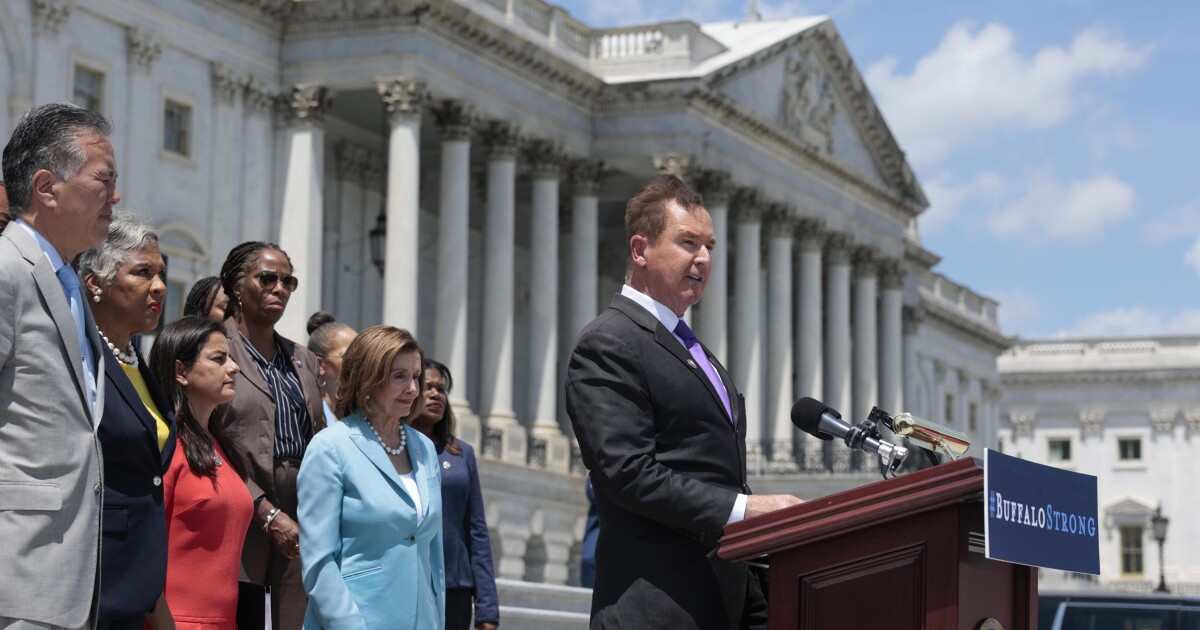 The Domestic Terrorism Prevention Act is the latest iteration of a Democratic push to enlarge the federal government's surveillance powers, according to Republican naysayers.

The Domestic Terrorism Prevention Act is the latest iteration of a Democratic push to enlarge the federal government’s surveillance powers, according to Republican naysayers.

The House recently passed the bill along party lines. It became a legislative priority after a gunman who espoused white supremacist views killed 10 people and injured three at a supermarket in a predominantly black neighborhood of Buffalo, New York. Though both parties condemned the atrocity in the strongest possible terms, most of the GOP refused to support the Democratic effort to direct more government resources toward preventing this kind of domestic terrorism.

The act was introduced in January 2021 following the Jan. 6 Capitol riot. It would create offices to combat domestic terrorism in the FBI, the Department of Justice, and the Department of Homeland Security, which would give biannual reports about the state of domestic extremism in the United States. Additionally, the bill would create a “task force to analyze and combat White supremacist and neo-Nazi infiltration of the uniformed services and federal law enforcement agencies.” As for budget, the bill specifies that the agencies appropriate “such sums as may be necessary,” essentially a blank check.

The Democrats of the House Judiciary Committee tweeted, “The Domestic Terrorism Prevention Act is the least we can do to signal our opposition to white nationalism and this rising menace of organized intolerance.”

The GOP leadership advised members to vote against the bill because it “would create unnecessary and duplicative domestic terrorism offices” and “these agencies already have the necessary authorities to investigate, prosecute, and interrupt legitimate domestic terrorists.”

“By diverting resources that could be used to actually combat domestic terrorism mandating investigation into the armed services and law enforcement, this bill further weaponizes and emboldens the DOJ to target Americans’ First Amendment rights to go after those who they see as political threats,” the party leadership said in an email.

The fear that intelligence and investigative agencies might overreach if given the opportunity was already realized last year. Last fall, the DOJ formed a task force to investigate parents who protested at school board meetings at the request of the National School Boards Association. FBI emails leaked to House Republicans showed that school board threats were getting investigated using “counterterrorism tools.”

The Republican opposition to the Domestic Terrorism Prevention Act made sure to invoke this overreach, bringing up the case of Scott Smith. Smith was arrested at a June 2021 school board meeting in Loudoun Country, Virginia, after he got into an altercation with another attendee. It was later revealed that he was hostile because his daughter had allegedly been raped by a male student who identified as nonbinary in a school bathroom and the district was trying to keep the matter quiet.

“The father goes to complain to the school board, and then the National Association of School Boards coordinates with the Department of Justice to figure out how to target parents — to then tag individuals specifically as to whether or not they’re threatening people by merely going to a school board to register their complaint,” Rep. Chip Roy (R-TX) said during a passionate floor speech. “That is what is at stake here. That is why we’re opposing what Democrats are trying to do.”

Democrats painted the bill as an urgent response to the terrorist incidents perpetrated by white supremacists and neo-Nazis.

“In the case of the Buffalo shooting, law enforcement had the warning signs,” Rep. Brian Schneider (D-IL), the bill’s sponsor, said in a statement. “The shooter had previously threatened his high school. He had been sent for a mental health evaluation. He was radicalized by social media and he leveraged it to spread his own hateful beliefs. The government and law enforcement have failed to catch these signs, just as Congress has failed to appropriately combat domestic terrorism.”

During debate on the House floor, he said that “inaction only gives cover to the next domestic terrorist planning an attack.”

Republicans, in response, said the view that attacks like the Buffalo shooting could be prevented through increased monitoring of white supremacists discounts that violence can be motivated by bigotry in the other direction. Frank James, a black man with a history of anti-white statements, injured 29 people in an attack on a Brooklyn, New York, subway station last month.

Additionally, some GOP members expressed concern that the agencies would become politically motivated and color outside the lines defining domestic extremism or terrorism.

Senate Minority Leader Chuck Schumer (D-NY) said he would force a procedural vote on the act in his chamber next week.