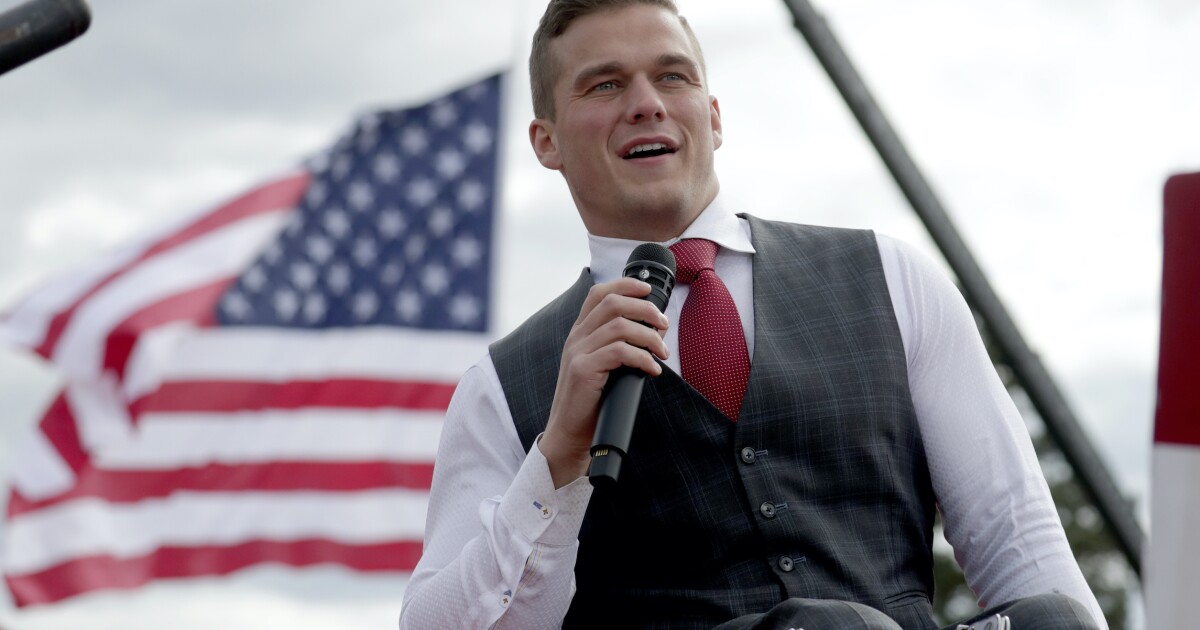 The House Ethics Committee has voted unanimously to launch an investigation into Rep. Madison Cawthorn for his connection to an alleged cryptocurrency scam and a possible inappropriate relationship with a member of his staff.

The House Ethics Committee has voted unanimously to launch an investigation into Rep. Madison Cawthorn for his connection to an alleged cryptocurrency scam and a possible inappropriate relationship with a member of his staff.

The scandal-prone Cawthorn (R-NC), who lost his renomination bid earlier this month, has been accused of insider trading related to the Let’s Go Brandon cryptocurrency, a Washington Examiner investigation revealed.

“Pursuant to the Committee’s action, the Investigative Subcommittee shall have jurisdiction to determine whether Representative Madison Cawthorn may have: improperly promoted a cryptocurrency in which he may have had an undisclosed financial interest, and engaged in an improper relationship with an individual employed on his congressional staff,” the committee said in a press release.

Rep. Veronica Escobar (D-TX) will oversee the subcommittee, and the statement notes that an investigation is not a declaration of guilt.

Jordan Libowitz, the communications director for the watchdog group Citizens for Responsibility and Ethics in Washington, hailed the committee’s decision to investigate Cawthorn’s promotion and reported financial interest in the meme cryptocurrency but noted that the committee doesn’t have much time to complete its inquiry following Cawthorn’s primary defeat last week to North Carolina state Sen. Chuck Edwards.

“It’s good that House Ethics will be investigating this, Libowitz told the Washington Examiner. “However, their jurisdiction is limited to Cawthorn’s time in Congress, so we hope that they are able to complete their investigation before his term is up and they are forced to drop the matter.”

Dylan Hedtler-Gaudette, the government affairs manager for the Project on Government Oversight, noted the significance of the committee’s unanimous vote to launch an investigation into Cawthorn.

“There is substantial reason to believe that Rep. Cawthorn may have committed insider trading or some other manner of impropriety,” Hedtler-Gaudette told the Washington Examiner. “The natural next step is an official investigation, and the findings of that investigation will be important to the effort to prevent this kind of misconduct in the future. The unanimous, bipartisan vote from the committee underscores the seriousness of these allegations, and that is encouraging from the standpoint of Congress wanting to get its house in order.”

The announcement comes just weeks after Sen. Thom Tillis (R-NC) cited the Washington Examiner’s reporting and called on the House Ethics Committee to investigate allegations that Cawthorn engaged in an insider trading scheme with LGBCoin.

Insider trading by a member of Congress is a serious betrayal of their oath, and Congressman Cawthorn owes North Carolinians an explanation. There needs to be a thorough and bipartisan inquiry into the matter by the House Ethics Committee. #ncpol https://t.co/3s1UJMk1tj

Multiple government watchdog groups previously told the Washington Examiner that Cawthorn may have implicated himself in an insider trading scheme when he wrote: “LGB legends … Tomorrow we go to the moon!” in response to a Dec. 29 Instagram picture of himself posing with the meme coin’s ringleader, James Koutoulas.

The next day, Koutoulas was featured in a statement from NASCAR driver Brandon Brown announcing that the coin would be the primary sponsor of his 2022 season, causing the cryptocurrency’s value to spike by 75%.

Koutoulas revealed in response to the Washington Examiner’s reporting that Cawthorn last traded the coin three weeks before the announcement was made.

But Cawthorn has never filed any financial disclosures reporting his purchase of LGBCoin, which members of congress are required to do whenever they purchase more than $1,000 of any cryptocurrency.

Both Cawthorn and Koutoulas later said knowledge of LGBCoin’s pending deal with Brown was all public knowledge in early December when the lawmaker reportedly traded the coin.

But neither Cawthorn nor Koutoulas were able to provide any records to the Washington Examiner showing that the deal was public knowledge in early December.

Craig Holman, a government affairs lobbyist for Public Citizen, previously told the Washington Examiner that Koutoulas’s statement that Cawthorn traded the meme coin before it struck its deal with Brown strengthened his suspicions that Cawthorn had insider knowledge at the time of his trade.

“The new information that Madison Cawthorn did indeed buy up LGBCoin prior to the public announcement of the NASCAR endorsement adds greater evidence to the suspicions of Cawthorn violating the insider trading laws,” Holman said. “If Cawthorn knew of the nonpublic material information that would radically boost the value of the cryptocurrency, and purchased LGBCoin with that knowledge, this would likely constitute insider trading.”