Our postmodern Left seeks absolute regulatory power to care for the new American Volksgemeinschaft, to repress the deplorables and give power only to those who are “woke.”

Is the American Postmodern Left a Fascist Movement? – American Thinker<!—->

For my work in corporate social responsibility, I was recently reading The Great Transformation, Karl Polanyi’s critique of capitalism, when something he wrote gave me one of those really uncomfortable “Aha” moments.

Polanyi was discussing the alternatives to capitalism — left socialism and right socialism (which we call “Fascism”). His point was that these two socialisms were created to undo the disruptions of capitalism which had privileged “money power” to degrade human sociality into atomic individualism driven by self-seeking greed.

When I read his observation that the Fascist phase of anti-capitalism brought about “Irrational philosophies, racialist aesthetics, anti-capitalist demagogy, heterodox currency views, criticism of the party system, widespread disparagement of the ‘regime’,” I thought “How odd, that sounds just like Alexandria Ocasio-Cortez and the postmodern Left.”

So, I took a moment to do a quick scan of Polanyi’s criteria of a Fascist movement to see how well they embrace our postmodern Left.

I concluded that our postmodern Left meets each of Polanyi’s criteria:

I investigated further, pulling out my copy of Mussolini’s pamphlet The Doctrine of Fascism (1932), finding the 25-point program (1920) of the German Workers Party (which was soon renamed the National Socialist German Workers Party) and the 1919 Manifesto of Mussolini’s new Fascist Party in Italy, to see how our progressive Left might align with the national socialist goals of that earlier era.

The 1920 Program of the National Socialist German Workers Party demanded that the State nationalize all industries; arrange for a division of profits of all heavy industries; expand old-age welfare; create a healthy middle class and the contract directly with small firms; expropriate land for public use, abolish land taxes and prevent of all speculation in land, provide higher education for every capable and industrious German and subsequently give them leading positions, and elevate national health.

The 1919 Manifesto of the Italian Fasci of Combat (Mussolini’s new party) demanded that the State provide Italians with: an eight-hour workday, a minimum wage, worker and union power to supervise industry; medical care; retirement at age 55; and impose “a strong progressive tax on capital (including a “partial expropriation” of concentrated wealth).”

Fascism thus proposed replacing the market with the national State. Mussolini said that “The one who can resolve the contradictions of capitalism is the State.” The National Socialist German Workers Party program demanded: “For the execution of all of this we demand the formation of a strong central power in the Reich. Unlimited authority of the central parliament over the whole Reich and its organizations in general.”

Similarly, the Green New Deal now proposes to give vast powers to our national government in Washington to solve all our problems.

To better understand why today’s postmodern Left follows a Fascist Socialism and not a Marxist one, we need to recall a little history. The 19th century brought forth two versions of socialism. Both sought to replace capitalist markets with the Community as decision-maker for all.

What both socialisms could not tolerate was freedom for individuals. Such freedom, they believed, was a burden and a curse. Freedom, they thought, only brought upon us hard work, unfair risk, and frequent loss.

Socialists however sought to end such harshness, remove such risks, and prevent hurt and disappointment by returning us to an Eden provided by the State as a caring god under their supervision. 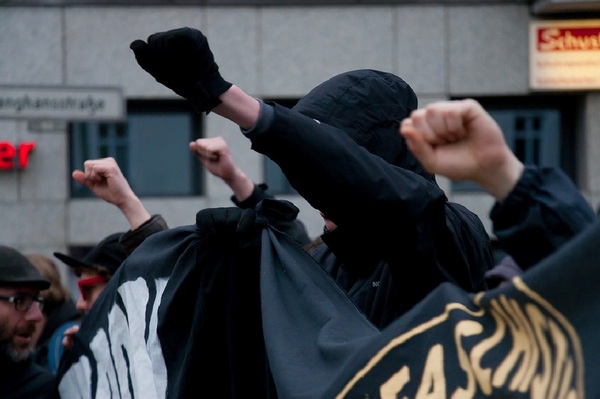 The first socialists looked not to the state but to small communities where love of neighbor would replace business competition. Think Hippies, Woodstock, communes, the 1967 Summer of Love in San Francisco.

This utopian vision of idyllic harmony among people was challenged by Karl Marx and Friedrich Engels in their Communist Manifesto of 1848, which promoted instead a hard-headed, scientific, socialism to win once and for all the global class war between the proletariat and the bourgeoisie and so bring about a return to Eden for humanity. Marx’s ideal was: “from each according to his ability; to each according to his needs.”

Scientific Socialism (Marxism) looked to the workers as a single international community of righteous persons who would be given what they deserved. The Communist Manifesto ended famously: “Workers of the World Unite! You have nothing to lose but your chains.” Marx’s road to better lives for all would be built on international class warfare.

Utopian Socialists refused to accept Marxism. They evolved into Anarchists, Syndicalists, and the communards of the 1871 Paris Commune, opening the door to socialism as different local and national — not international — zones of production.

In this national Socialism, class war within the nation was rejected on principle as divisive and harmful to the community. Both capitalists and workers had to be integrated into a single communal regime. The State was therefore proposed as the manager of everyone and everything belonging to the community.

What national socialists then needed was identification of who belonged to the community to be protected and promoted. The Fascist parties of Europe easily turned to ethnicity and language as the basis of national community. The word in German was Volksgemeinschaft  — a people’s community.  At the end of World War I, even Woodrow Wilson spoke of the “self-determination of peoples.”

Today our national socialists on the progressive Left define the American people as those who are marginalized, or, if they are not marginalized by virtue of their race, gender, or sexual preference, have nevertheless become “woke.”  In Hillary Clinton’s words, the only proper members of the new American Volksgemeinschaft are those who are not “deplorable”  — who are not “racist, sexist, homophobic, xenophobic, Islamophobic.”

Our postmodern Left seeks absolute regulatory power to care for the new American Volksgemeinschaft, to repress the deplorables and give power only to those who are “woke.”  This duty is now being carried out by dedicated cadres of the movement on college campuses, in tenured faculties, in elementary schools, and on social media.

Again, our postmodern Left is following Fascist precedents.  Mussolini promised that the Fascist State “is an educator and promoter of spiritual life to make each person better in his or her character and faith”.  The State is to penetrate the will and the intelligence of the person, educating the person in civic virtues. The State is to be directed by “Those who are the moral dictators of the country.”

Both Mussolini and Hitler gave the national socialist state the power to censor and prevent wrong-thinking and wrong expression.  Hitler’s student followers created a blacklist of bad books and burned them.  Hitler gave a speech declaring “merciless war” on bad cultural expression and degenerate art.

Since our postmodern Left does not yet control the State, it uses social and cultural powers to silence those who oppose it. Thus the panic and furious opposition to Elon Musk taking power over a principal instrument of social control  — Twitter.

Even the Democratic Party’s attempt, executed by leaders of the CIA, FBI, and the Department of Justice, to take down Trump with the Steele Dossier and the Russia Collusion narrative had its Fascist precedent. In Mein Kampf, Hitler wrote, “…in the big lie there is always a certain force of credibility… It would never come into [the heads of ordinary people] to fabricate colossal untruths, and they would not believe that others could have the impudence to distort the truth so infamously.”

So, all things considered, is our postmodern Left just another “Big Lie”?