We humans can be better than chimps. We can turn off our emotions and our beserker rage and act rationally.

I’ve been wading through a lot of political word salad lately. Here’s conservative Glenn Ellmers kale-ing about Bill Voegeli being a meany-jelly-beanie. It has something to do with the nobility of the Founding against the crudity of Trump.

And here is Matthew Crawford waffling about COVID and liberal individualism and authoritarianism. He’s on about two rival narratives, the Lockean one about us as “rational, self-governing creatures.” And the Hobbesian one about the state that “underwrites a technocratic, progressive form of politics” in saving us from the war of all against all.

Had enough salad? Here’s some red meat. Okay, you Aussies, go put your witchetty grubs on the barbie — if you must. But we ’Muricans… Let me just misquote Shakespeare, to set the proper white supremacist tone: “my meat’s to me religious; else, doth err.”

Let’s straighten out Crawford on politics.

Politics is about friend vs. enemy. Here’s how Nazi jurist Carl Schmitt puts it in The Concept of the Political:

The specific political distinction to which political actions and motives can be traced is the distinction between friend and enemy.

As in: there is no politics without an enemy.

As in: politics is all about friends getting together to beat up on the enemy.

As in: politics divides the world into us and them.

As in: progressive politics divides the world into allies and oppressors.

As in: politics is a cold war; civil war is a hot war.

I could go on.

You can see why the liberal project has reduced America to a pissing match on social media. We humans are like chimps. We live peacefully in a hierarchy in our own little wokey world, but when we encounter a racist-sexist-homophobic chimp from another troop 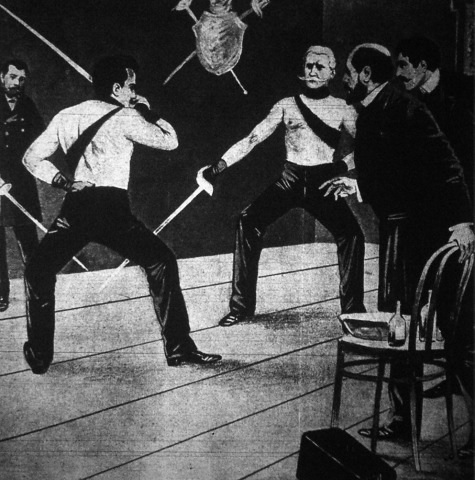 on our territory we kill him. Or cancel him.

But we humans can be better than chimps. We can turn off our emotions and our beserker rage and act rationally. Curtis Yarvin:

When you and everyone like you is ready to practice unemotional politics, human politics — ironic, counterintuitive, Machiavellian politics — you will brush your real enemies (who are not who you think they are) aside like straw.

In other words, get beyond mostly peaceful protest, or running down paradegoers in your SUV or taking your rifle to a supermarket. Get strategic, baby!

And the most strategic thing is for humans to get beyond chimp territorial feuding. There is a way, you know. Yarvin calls it “neutrality.”

Civilization, regardless of whatever races did or did not invent it, introduced a third category into Schmittian chimp politics: neutrality. For the first time, between human individuals or groups, it became possible to escape the friend-enemy distinction.

Neutrality made it possible to address the outsider civilly, as neither friend nor enemy, but united under law — owing the due duties and respects due to a stranger under law. Neutrality is the source of all true peace — universal friendship is universal conquest.

That is what the Lockean logic and reason is really all about. Cooling the jets of politics and friends vs. enemies. So we can interact peacefully.

Neutrality, and civility, and law are the Escape from the Alcatraz of politics and friend vs. enemy. It says that if someone attacks your family, you go get the cops. If someone defrauds you then the law deals with the cheater.

Or, if you like, Locke and Hobbes are not rivals but complementary, for Locke’s self-governing citizen makes peaceful neighbors out of the naked enemies of Hobbesean conflict.

But our liberal friends think that politics, especially making enemies of racist-sexist-homophobes, is the royal road to justice.

Yes, it’s really a shame that our liberal friends have been beating up on the police lately. Because that means we go back to vigilantism. It’s really a pity that our liberal friends like to use the courts to impose their moral and administrative law on the rest of us. Because they advertise that law is just another tool of the ruling class, rather than a way for the rest of us to settle our problems without force.

On the other hand, it is comical. Our wise educated liberal friends think that they are bending the arc of history towards justice. Instead, they are dividing the world up into friends and enemies. And their leaders find that, more and more, they can only explain the disaster they have visited on us by conjuring up fairy tales about enemies: armed insurrectionists and violent extremists, ultra-MAGAs and deplorables.

Yes. Our educated liberal friends literally know nothing. On Saturday morning at the top of the hill — where the liberal swells live and the Ridwell boxes march in battalion strength — I asked a nice liberal lady about her racist BLM signs.

“But they are anti-racist,” says she.

“Hegel says that racism and anti-racism are the same thing,” sez I.

See what I mean?