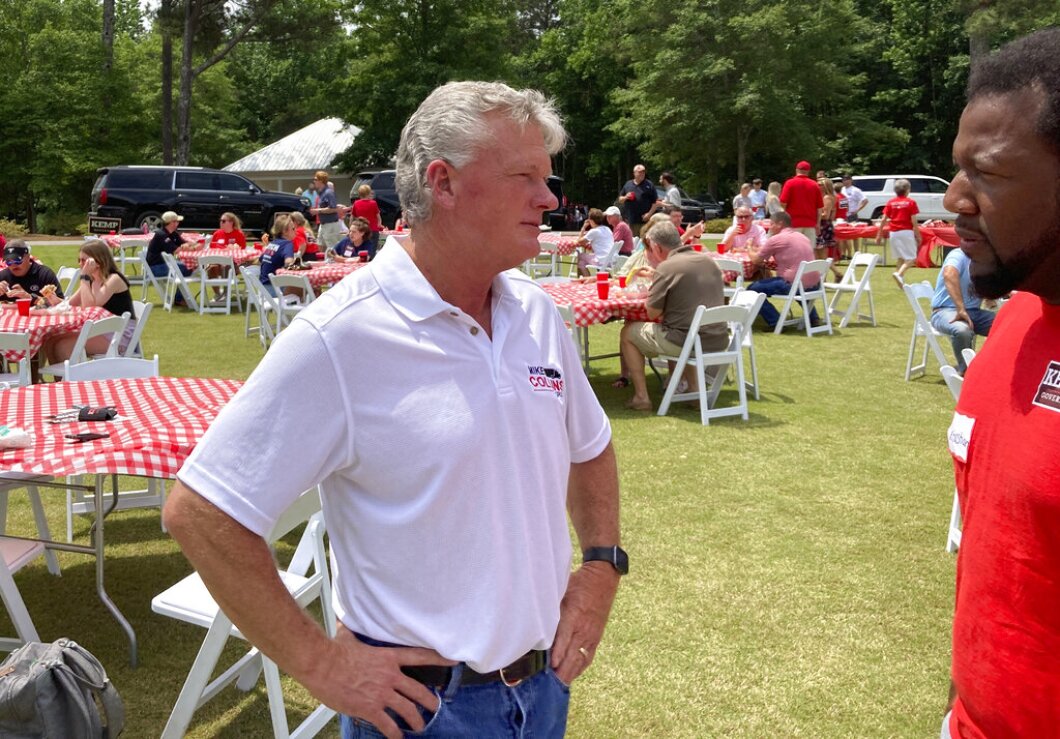 A Georgia congressional candidate hand-picked by former President Donald Trump forced a Republican runoff with a conservative trucking executive in a competitive race that tested the strength of the former president's power in the state.

A Georgia congressional candidate hand-picked by former President Donald Trump forced a Republican runoff with a conservative trucking executive in a competitive race that tested the strength of the former president’s power in the state.

Mike Collins, the oldest son of former Rep. Mac Collins, and Vernon Jones, the self-described “black Donald Trump,” each failed to meet the threshold needed to declare an outright victory on Tuesday night.

Instead, Collins and Jones will meet in a head-to-head matchup in June to see who will be the Republican nominee for Georgia’s 10th Congressional District.

Tuesday’s crowded field of eight GOP candidates also included former Rep. Paul Broun and state Rep. Timothy Barr. The Democratic primary had five candidates, but the red tilt of the 10th Congressional District means that the eventual winner in the Republican primary election will likely occupy the seat in January.

“Throughout this race, our campaign has withstood attack after attack from the radical Left, Washington establishment, and RINO Right,” Jones told the Washington Examiner late Tuesday night. “The people of the 10th Congressional District saw through their deceit and saw my campaign for what it was: a grassroots movement fueled by the people to take our country back.”

Jones and Collins ran as unabashed pro-Trump conservatives, though only Jones had his seal of approval.

Collins narrowly lost the primary to Rep. Jody Hice in 2014. Hice left his east Georgia House seat to run for secretary of state with Trump’s blessing.

For much of the primary race, Collins led the pack of candidates in loans and money raised. He also turned up his Trump dial to 10 and vowed payback for the 2020 presidential elections. He pledged to stand up to “liberal left-wing wackos, RINOS, elites — and even the Republican establishment,” promising to vote against House Minority Leader Kevin McCarthy (R-CA) for Speaker of the House should the GOP take control of the lower chamber in 2023.

House Republicans need to net five seats in the 435-member chamber to win back the majority they lost in 2018.

During campaign stops across the district, Collins made clear he wasn’t interested in reaching across the aisle if he was elected to Congress.

“The time for compromise, time for bipartisanship — that’s over with,” he said. “This is the best time in our lifetime, y’all, to send Republicans to Congress.”

Despite his devotion to the “MAGA-verse,” Collins failed to secure a coveted Trump endorsement.

The former president’s conviction in his own popularity was so powerful that he placed a risky bet that white rural voters would get behind any candidate he endorsed, even one who had been a Democratic candidate two years ago.

Determined to remake the southern state in his mind, Trump convinced Jones, 61, to drop out of the Republican gubernatorial primary so that his preferred candidate, former Sen. David Perdue, could take out Trump nemesis Gov. Brian Kemp, who refused to overturn the state’s presidential results in Trump’s favor illegally. The former president promised to endorse Jones in a congressional primary if he quit his statewide bid for governor.

Jones told the Washington Examiner that the former president told him he could “kill two birds with one stone” by running in the congressional race. If he won, he told Jones, he would have a bigger platform than if he were governor.

Georgia’s 10th Congressional District, a conservative stronghold made up of 18 counties, stretches from the outskirts of Henry County in metro Atlanta to the border of South Carolina.

Jones previously served in the Georgia House of Representatives as a Democrat. He was on the outs with his then-party when, in 2020, he rose to national prominence as one of the loudest black voices to endorse Trump’s reelection. He announced he was switching parties during a Washington, D.C., pro-Trump demonstration organized by Women for America First, just hours before the Jan. 6 attack on the Capitol.

Jones spent much of his campaign repeating debunked theories that the 2020 election was stolen by President Joe Biden.

During a recent interview with the Washington Examiner, Jones vowed to introduce articles of impeachment against Biden and Vice President Kamala Harris on his first day in Congress for a “betrayal of trust.”