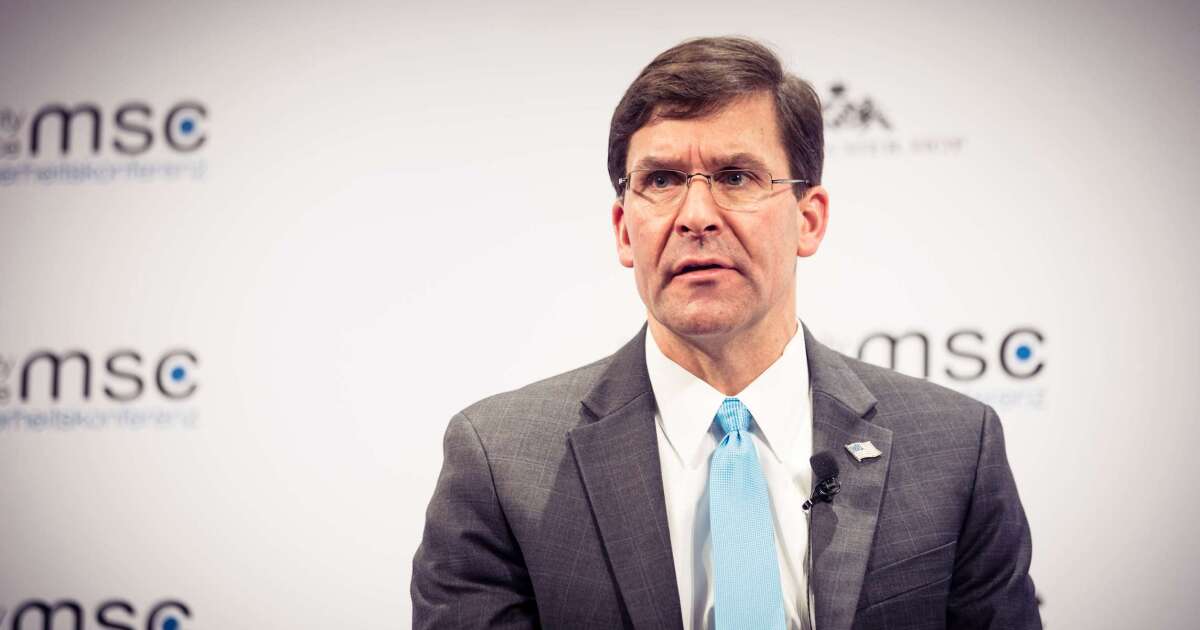 There were conversations between the Department of Homeland Security and U.S. Northern Command about deploying "hundreds of thousands" of troops to the southern border amid a migrant surge, according to former Defense Secretary Mark Esper.

There were conversations between the Department of Homeland Security and U.S. Northern Command about deploying “hundreds of thousands” of troops to the southern border amid a migrant surge, according to former Defense Secretary Mark Esper.

Without the Pentagon’s knowledge, NORTHCOM, which is the combatant command that covers North America, worked on “a concept to deploy a couple hundred thousand plus troops to the border,” Gen. Mark Milley, chairman of the Joint Chiefs of Staff, told Esper, the Trump-era secretary wrote in his upcoming memoir, A Sacred Oath, which the Washington Examiner obtained ahead of its planned release later this week.

DHS and NORTHCOM met about it and were “moving forward with their plans,” he wrote.

Esper wrote that he told Milley to “shut down the planning, and let them know there was to be no further engagement with DHS on this matter,” adding, “If anyone at Homeland Security has an issue with my order, then they are welcome to call me direct.”

Esper said he was first informed of this plan by Stephen Miller, an adviser to former President Donald Trump known for his hard-line immigration stance. Miller told Esper in the Oval Office while they were waiting for Trump’s arrival, “We need to get a quarter million troops to the border soon,” adding, “There is another caravan coming from the south, and we need to stop it.”

Esper responded, “I haven’t seen any reports about another caravan, and I’m confident DHS can handle it as they’ve done in the past,” to which Miller retorted, “This is a big one. [Customs and Border Protection] can’t do it. We need to deploy the military. I’m already talking to folks at DHS.”

Miller’s admission set the then-defense secretary off. Esper wrote that he said the Pentagon does not “have two hundred and fifty thousand troops to send to the border for such nonsense” and then directed Milley to inquire of NORTHCOM about plans, about which he later briefed Esper.

The former secretary called the idea “simply outrageous, unless you’re Stephen Miller.” He described the Trump adviser as “a slight, unremarkable person with a deadpan gaze that suggested a real lack of humor or warmth,” though Esper noted Miller had “both Trump’s ear and his voice,” providing him with “far more deference than his actual position and qualifications warranted.”

Later in the Trump administration, Miller suggested finding the decapitated head of Abu Bakr al Baghdadi, who blew himself up as U.S. forces closed in on him in Syria, so that the United States could “dip it in pig’s blood and parade it around to deter other terrorist,” Esper wrote. The former defense secretary said he called the suggestion a “war crime” and said the “U.S. military will never do that.”

Esper’s book did not specify exactly when these conversations took place but noted they happened around the summer of 2020, which is also when he claims the former president suggested using missiles to attack Mexican drug labs. According to the book, Trump, on “at least two occasions,” asked if the military could “shoot missiles into Mexico to destroy the drug labs” because, in the then-president’s opinion, the Mexican government “isn’t doing enough,” adding, “They don’t have control of their own country.”

“Mr. President, we could do that, and as much as I want to stop these drugs too, shooting missiles into Mexico would be illegal,” Esper responded. “It would be an act of war” that “would not only violate international law, it would also destroy our relationship with Mexico and damage our global standing.”

“We could just shoot some Patriot missiles and take out the labs, quietly,” Trump suggested, “No one would know it was us,” according to the book. His defense secretary said in response, “This would be an act of war Mr. President, and there would be no way to keep it quiet.”

Representatives for the Pentagon, DHS, and NORTHCOM did not respond to requests for comment. Milley’s spokesperson declined to comment.