The Russian Federation is not losing this war. Please do not be fooled into thinking that.

Putin is Fighting the War He Chooses – American Thinker<!—->

As I returned from Ukraine a few days ago after my first post-COVID reporting trip and after a couple days of letting my aging bones resume their proper position after the trauma of 10 hours in an economy-class airline seat, I do believe I have gained some insight into the logistics of this conflict after all.

Which I have to say I initially doubted.

During those three weeks in Ukraine, I was present for missile attacks in two cities, sat wide-eyed through dozens of artillery barrages, spent hours discussing the war with a wounded Ukrainian soldier on a 17 hour train ride from Lviv to Dnipro in a small train cabin, visited with serving members of the Ukrainian army, photographed many wrecked buildings in the eastern part of the country and ate borscht so many times that I believe I can now identify the recipe differences between Dnipro and Lviv. 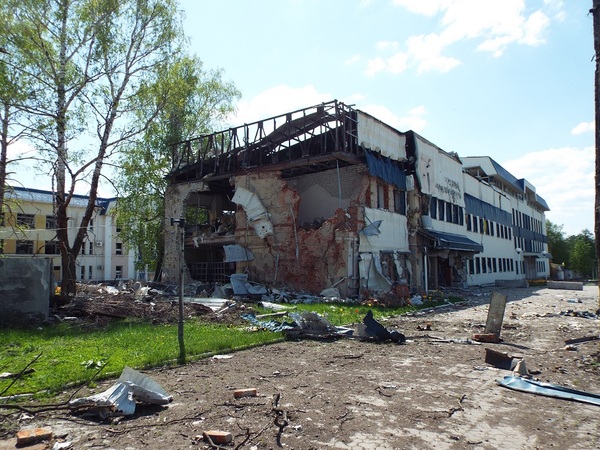 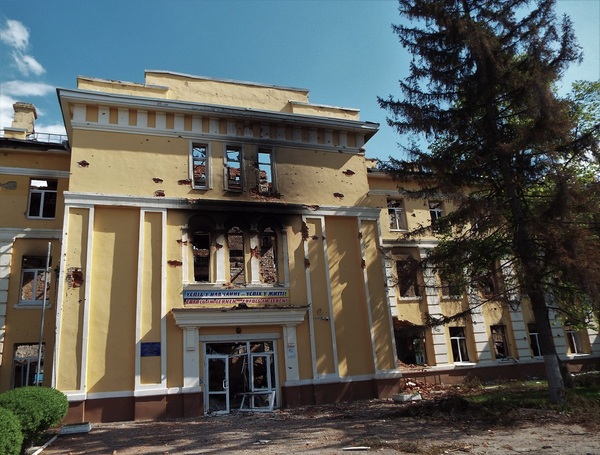 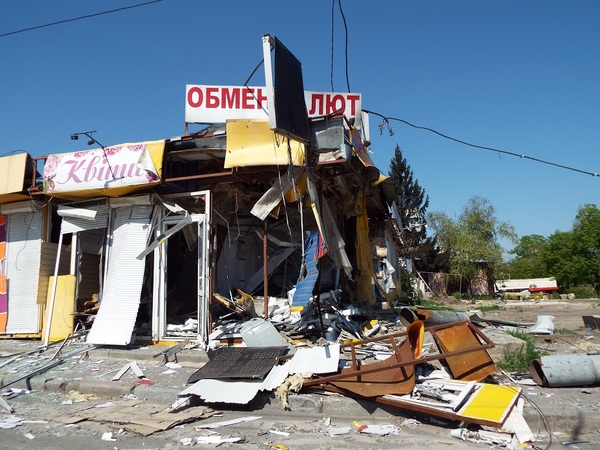 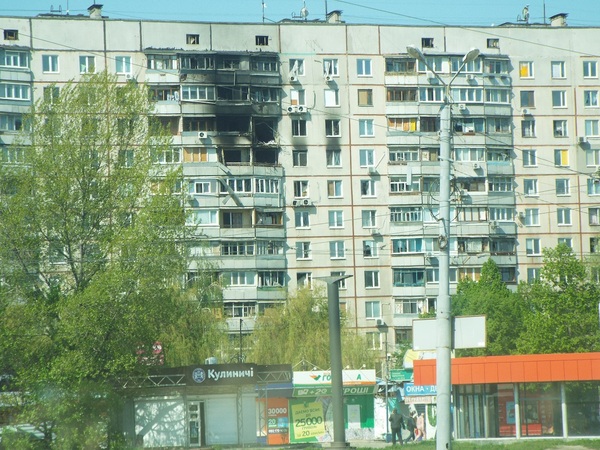 Photos by the author

Before I begin, let me establish a couple of things as a reference point for my views.

First, of course Putin was wrong to invade Ukraine, that is a given.

The loss of life is horrific.

I fully support the Ukrainian people in their efforts to expel what are called there the “Russian Occupiers.” (Tellingly, Russian soldiers are now being referred to as “Orcs” by younger Ukrainians.)

But the relationship between Russia and Ukraine is a long one, and it is much more complex than we as outsiders can ever imagine. I had a three-hour conversation with a Polish computer technician named Vasily who sat next to me on the plane out of Warsaw about this exact issue. And while he admitted he was surprised the invasion occurred, he was not as dismissive of Russian methods and goals as you might think. More than once, the concept of being Russian as not just a nationality, but instead an ethno/spiritual state of being, was expressed by him to me.

So, with that being said, I would rather comment on just a few specifics and throw in a little speculation that I will state to some extent as fact, simply because to do otherwise would become tedious for the reader.

It appears to me Moscow (and I am choosing to use Moscow to refer to the Russian Federation as to me it’s a bit simplistic to refer to one man as the leader of a nation with a representational body as is the Duma) has a fixed series of goals in the war. Now we could argue all day over whether the Duma truly represents the people of the nation, but that would be pointless given the reason for writing this piece.

I perceive Moscow’s goals in this military engagement as:

If we approach the situation with these points in mind, events and decisions made by Moscow will begin making a bit more sense.

Despite what the media is presenting, the army of the Russian Federation is not made up of rampaging Orcs who rape, murder and pillage. And they have not, as we are told, being bested in every contest with the Ukrainian army. Additionally, Moscow’s army is not exhausted and out of fuel, equipment and supplies. There have not been mass desertions from Russia’s army. What you are reading is the typical propaganda that always seems to show up in a war in this region. I saw the exact same thing and devices used in the 2008 South Ossetia War when I worked for the newspaper Georgia Today and that particular Russian Invasion was occurring.

Perhaps it is best to begin by being honest and recognize that Moscow is exercising (to some extent anyway) restraint in this action so far. I am not defending this endeavor, but this is the simple fact of the military situation as I perceive it.

If you accept that a decision has been made to only accomplish a relatively small set of specific goals as outlined above, it is easy to see that this is why there has been no out-and-out destruction of the infrastructure of Ukraine when it is well within the ability of Moscow to do so.

With a map of the country in hand and after riding the train and taking the bus on several of the east-west-north routes, you would most likely see it doesn’t take a military genius to realize that the topography of Ukraine makes it very vulnerable to aerial bombardment. And the country is by all appearances not prepared for attacks at these vital points.

As one example, on the bridge crossing the Dnieper River in Dnipro, there were no aerial defence systems present, instead only two small groups of soldiers on either end armed with PKMs in sandbag enclosures.

Additionally, in terms of intra-country transportation, Ukraine suffers from antiquated facilities and rolling stock, particularly in the area of railroads. Some of the rolling stock is still of Soviet vintage. And not as curious antiques for tourists to ride in, but for the actual transportation of goods.

Below is a map of Ukraine. I would like you to examine this map before and after you read my points. 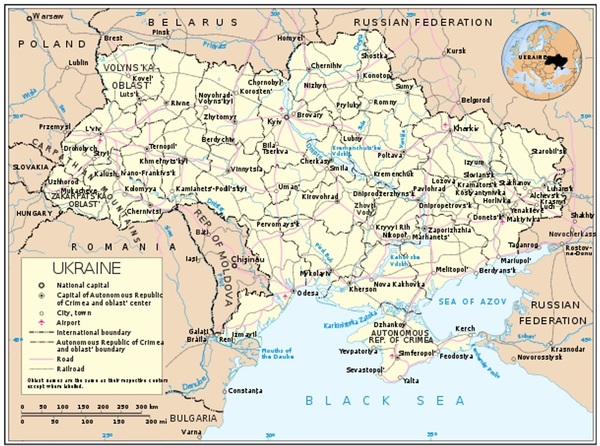 It is worthwhile to note the presence and geographic position of the Dnieper River, which essentially splits Ukraine into a western and eastern section. From the standpoint of defense of a nation from a land based invasion, it would be difficult to overstate the significance of this fact. Simply put, if the actual goal of Moscow were to simply invade and occupy Ukraine, then the following would be their logical course of action to pursue:

Moscow could accomplish all of the above in approximately one week’s time. It has air superiority despite what you read. And it is important to remember as well that Moscow has the aircraft — a combat-ready 964 heavy bombers and fighters as reported by Janes Intelligence Review — to withstand what losses would occur if this route to invasion is chosen.

If such a series of steps were taken by Moscow, the following would happen:

What I find almost staggering is I could go there, travel around a bit, interview a few people, look at how poorly bridges, road junctions and railway stations are actually defended and then figure out that Moscow has decided to prosecute this war with perhaps only 10% of its armed forces’ capability. Instead of examining the simple facts of this conflict, analysts and media personalities choose to ignore the obvious and instead become ecstatic over a series of videos of Russian BTR 80s, BMP2s, T72s (and at least one of the new T90s) being blown up in minor engagements with Ukrainian forces.

Moscow does have an end game.

It is in fact accomplishing what appear to be the goals it began with on February 24th.

Russia is fighting exactly the war it wants to fight on an apparently adjustable timetable.

I have no insight into why Moscow is fighting the war this way, but it has up until now decided on not conquering Ukraine, or even making inhabitants suffer to any great extent outside of a few cities.

My best guess is that the holding back of Russian forces is part of an evolving plan, so that when the inevitable peace negotiations begin, it will make it easier for both parties to come to terms.

If, however, we begin hearing that train stations, road junctions and electrical stations in the country are being systematically destroyed on a massive scale in rapidly increasing numbers (particularly if the bridges at Kiev, Cherkasy, Dnipro and Zaporizhzhia are targeted) then that may very well indicate there has been a change of plans by Moscow in terms of goals for this invasion.

My take is everything is being run on a timetable, with some obvious setbacks for Moscow, as the Ukrainians are receiving massive amounts of military equipment from the west and they are putting up the best fight that they can.

But the Russian Federation is not losing this war.

Please do not be fooled into thinking that.