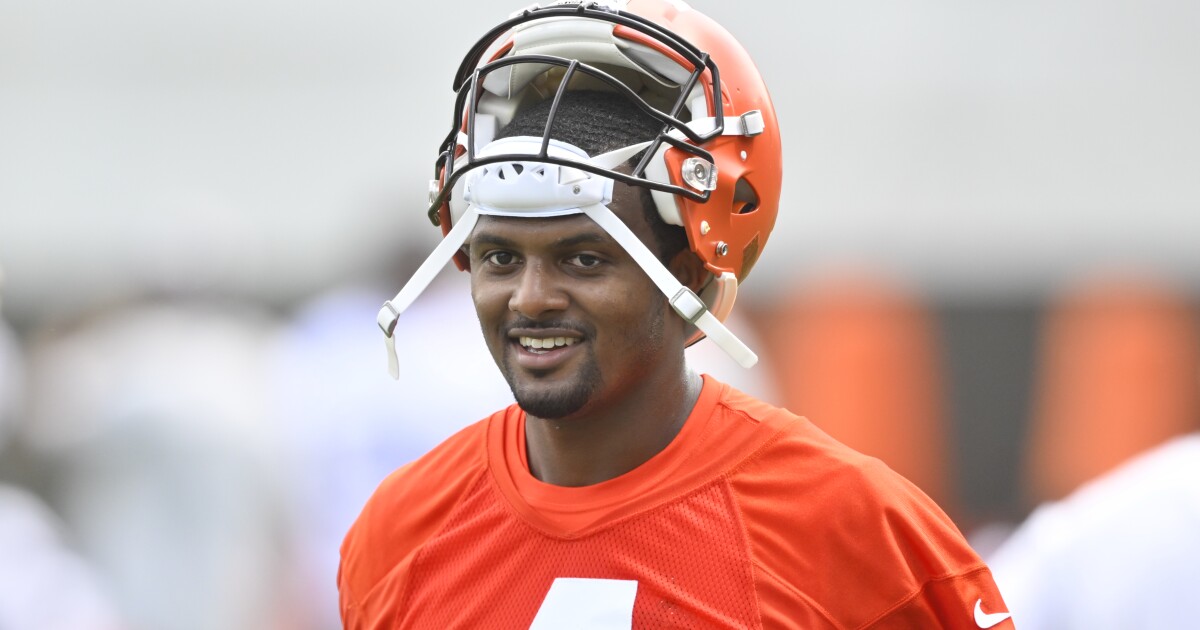 NFL quarterback Deshaun Watson reportedly met with at least 66 women during a 17-month period for massages, more than previously known as the league reviews his conduct.

NFL quarterback Deshaun Watson reportedly met with at least 66 women during a 17-month period for massages, more than previously known as the league reviews his conduct.

Some of the women undercut the 26-year-old quarterback’s claims that he was merely pursuing professional massage therapy and have filed lawsuits against him that allege he engaged in sexual misconduct, according to a report from the New York Times.

In March, Watson signed a $230 million contract with the Cleveland Browns — he was playing for the Houston Texans during the time most of his alleged misconduct took place. So far, the NFL has not announced disciplinary measures against him. Watson’s lawyer, Rusty Hardin, recently said he expects a decision from the league before the season begins and cautioned there was a “good possibility” the “hell of a detailed investigation” by the league will reach a conclusion he doesn’t like, the Columbus Dispatch reported.

Watson has vehemently denied allegations of misconduct and has maintained that any sexual activity that transpired had the appropriate level of consent. The football star avoided indictments for criminal sexual misconduct charges from two grand juries earlier this year.

Of the 66 women referenced in the new report, at least 24 have sued him, two have filed criminal complaints against him, and 15 have released statements of support for Watson. Prior reporting indicated that more than 20 women had levied sexual misconduct allegations against him, including claims that he made inappropriate physical contact with, sexually harassed, and exposed himself to women during massage appointments.

Specific accusations against Watson vary, but many entail disturbing behavior and claims that he made appointments in pursuit of sex, the New York Times reported. The encounters reportedly took place from fall 2019 through spring 2021. One of the women who came forward to police alleged he requested that she put her mouth on his genitalia.

“I specifically had to say, ‘No, I can’t do that,’” she recalled, per the outlet. “And that’s when I went into asking him, ‘What is it like being famous? Like, what’s going on? You’re about to mess up everything.’”

One of the most recent women to file a complaint against him alleged that he masturbated during one of his appointments.

Watson reportedly met the women through various means, including referrals, social media messaging, and more. The massages reportedly took place at various locations such as massage outlets, hotels, and even one woman’s mother’s house.

A frequent location for his massages was A New U Spa, where he befriended the owner and gave her $5,000 to purchase new equipment, according to the outlet. She then arranged appointments with several women employed there. One recalled him texting, “I told you I’ll show you how to get money from men that’s my specialty.”

Nia Smith, who worked at A New U Spa, posted messages Watson allegedly sent her on her Instagram account after she changed jobs. After her post, lawyers for the Texans quickly crafted a nondisclosure agreement that he began using when he made appointments for massages, according to the report. If women wanted his business, they had to sign the form.

During one of his depositions, Watson was asked about a message he sent to one of his accusers in 2020 in which he said, “Sorry about you feeling uncomfortable.”

“I don’t know,” Watson answered, acknowledging she had tears in her eyes during the session. “Like I told you at the beginning of this depo, I’m still trying to figure out why we [are] in the situation we are in right now, why I’m talking to you guys, why you guys are interviewing me. I don’t know. Do not know.”

Watson has been training with the Browns as his legal challenges continue to mount. He has hired high-powered defense attorneys such as Hardin to help fend off the legal challenges against him and was hit with two additional lawsuits over his alleged behavior this past week, according to the report.

The Washington Examiner reached out to Hardin, the Texans, and the Browns for comment. The NFL declined to comment.