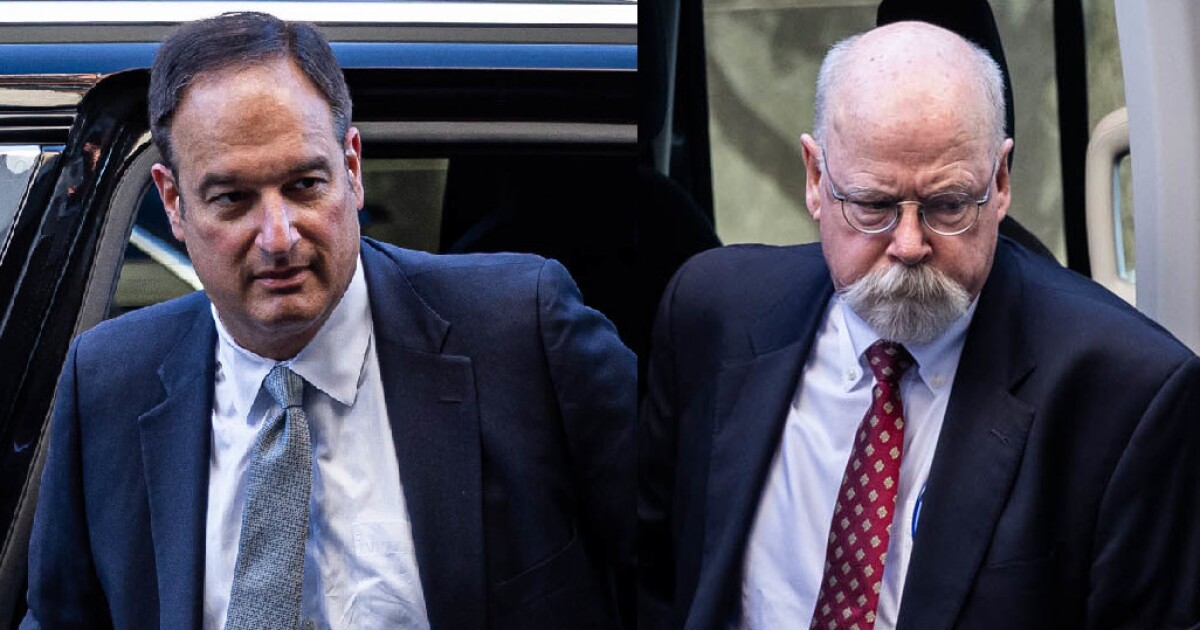 Special counsel John Durham's team presented evidence suggesting Michael Sussmann billed Hillary Clinton’s 2016 presidential team for the thumb drives he used to push now-discredited Trump-Russia allegations to the FBI in 2016, despite Sussmann claiming he did not do so for the campaign.

Special counsel John Durham’s team presented evidence suggesting Michael Sussmann billed Hillary Clinton’s 2016 presidential team for the thumb drives he used to push now-discredited Trump-Russia allegations to the FBI in 2016, despite Sussmann claiming he did not do so for the campaign.

Sussmann, a former Perkins Coie lawyer who represented the Democratic National Committee when it was hacked in 2016, is on trial after being charged with lying to the FBI about whom he was representing when, in September 2016, he presented internet data that suggested a now-discredited link between former President Donald Trump and Russia’s Alfa-Bank. In particular, Sussmann was indicted on charges of allegedly concealing his clients — Clinton’s 2016 presidential campaign and “Tech Executive-1,” known to be former Neustar executive Rodney Joffe — from FBI general counsel James Baker. Sussmann denies lying to the FBI and has pleaded not guilty.

Two thumb drives containing Alfa-Bank claims, along with “white papers” pushing the claims, were provided to Baker by Sussmann at the meeting, and the prosecution presented evidence that even the USB drives bought by Sussmann were billed to the Clinton campaign. The thumb drives, one blue and the other red, were displayed to the jury as evidence this week in Washington.

Kori Arsenault, a paralegal for the Justice Department, discussed an expense report in which the expense owner was listed as “SUSSM” — Sussmann, who submitted it on Sept. 22. The allocation was marked “confidential” and charged to Hillary for America. The expense report included a Staples store receipt dated Sept. 13, and it included a two-pack of 16-gigabyte flash drives that cost $12.99. The store location, which Arsenault showed on Google Maps, was just around the corner from the Perkins offices in Washington.

The disbursement report listed the client as Hillary for America, stated “General Political Advice” was the purpose, and described it as “Sussmann Purchase of new single use flash drives for secure sharing of files 9/13/16.”

Opposition research firm Fusion GPS drafted one of the “white papers” Sussmann gave Baker, according to the special counsel.

British ex-spy Christopher Steele created his discredited dossier on then-candidate Donald Trump after being hired by Fusion, which was itself hired by Perkins and Marc Elias, the general counsel for Clinton’s campaign. Durham has noted Fusion claims were pushed to the media, State Department, Justice Department, Congress, and elsewhere, which “resulted in numerous media articles” before and after the 2016 election.

During questioning by Durham prosecutor Michael Keilty, Arsenault said she has been assigned to the special counsel’s office since August 2019 and prior to that had been a paralegal in Durham’s U.S. attorney’s office for seven years. She said had been collecting and organizing the incoming information returned to the special counsel’s office from grand jury subpoenas, including emails, billing records, phone records, and calendar entries.

Arsenault put together other records aiming to demonstrate that Sussmann went to the FBI on behalf of the Clinton campaign, including a Perkins billing chart laying out her findings related to Sussmann billing time to the Clinton campaign. She specifically pointed to a meeting on “Communications with M Elias regarding server issue” on July 1, “Communications with M Elias regarding server issue” on July 31, “Meeting with consultant, M Elias, revisions to white paper, meeting with expert and reporter, follow up meeting” on Sept. 6, “Multiple meetings regarding confidential project, draft white paper … meetings with M Elias” on Sept. 14, and “Work and communications regarding confidential project” on Sept. 19.

The FBI, CIA, special counsel Robert Mueller, a bipartisan Senate Intelligence Committee investigation, and Durham’s team have all cast doubt on or shot down the Alfa-Bank claims. Baker, who is now a top lawyer for Twitter, testified this week that the final conclusion of the FBI was that “there was nothing there.”

During the trial Wednesday, Arsenault went through numerous Perkins calendar entries, including showing Clinton campaign-related meetings for “Marc, Michael, Fusion Team” on July 29 and for “other work and multiple telephone conferences regarding confidential project” for four to five hours on Sept. 20. She was later shown a Nov. 6 email from Sussmann to Perkins on “Time Monday September 19” that read “HFA. Work and comms regarding confidential project” for 3.3 hours. She said Sussmann now had billed approximately an hour less than before and that “I believe” Sussmann removed the phrase “work on written materials.”

Baker testified last week he was “100% confident” that Sussmann was not there on behalf of a client.

Defense attorney Michael Bosworth asked Arsenault if there was a reference to the FBI in Sussmann’s Sept. 19 entry, and she said there “is not.” He then pointed to calendar entries from 2015 that referenced Joffe and a meeting with the FBI. Under questioning, Arsenault said an expense report related to the FBI meeting Sept. 19 was “charged to the firm generally” and not to the Clinton campaign specifically. The entity charged was “Business Development / Client Travel.”

Brandon Charnov, a project assistant at the defense team’s law firm, Latham and Watkins, was the summary witness for the defense team. He put together a calendar showing Sussmann’s client meetings and communications on behalf of the DNC, the Democratic Congressional Campaign Committee, and the Clinton campaign from June to October 2016.

Charnov displayed messages showing at least some at the FBI knew he was representing the DNC or Clinton campaign, including where the FBI listed Sussmann as an attendee for a secret-level threat briefing at FBI headquarters for the DNC, DCCC, and Clinton campaign.

Keilty asked Charnov if Sept. 18 was anywhere on his chart, and he said it was not. The Durham prosecutor then displayed Sussmann’s text that evening to Sussmann in which he asked to set up a meeting the next day and claimed he wasn’t coming in on behalf of a client.

“Jim — it’s Michael Sussmann. I have something time-sensitive (and sensitive) I need to discuss,” Sussmann texted Baker the night before their meeting. “Do you have availability for a short meeting tomorrow? I’m coming on my own — not on behalf of a client or company — want to help the Bureau. Thanks.”

Baker met with Sussmann the next day. Baker said last Thursday that Sussmann repeated the lie at the meeting.

The defense team assistant also admitted that “September 19 is not in the chart” despite it being the date of the Baker-Sussmann meeting.

The Durham prosecutor asked him if he even knew about that meeting, and Charnov replied, “To be honest, this is the first time I’m hearing of this.” When Keilty asked him if that was a key date in this trial, Charnov said, “I don’t disagree. I just don’t have an opinion.”

Charnov also said he “was not aware” that Sussmann also went to the CIA in 2017, when Sussmann had again pushed Trump-Russia claims, and Durham says he again misled about not doing it for a client.