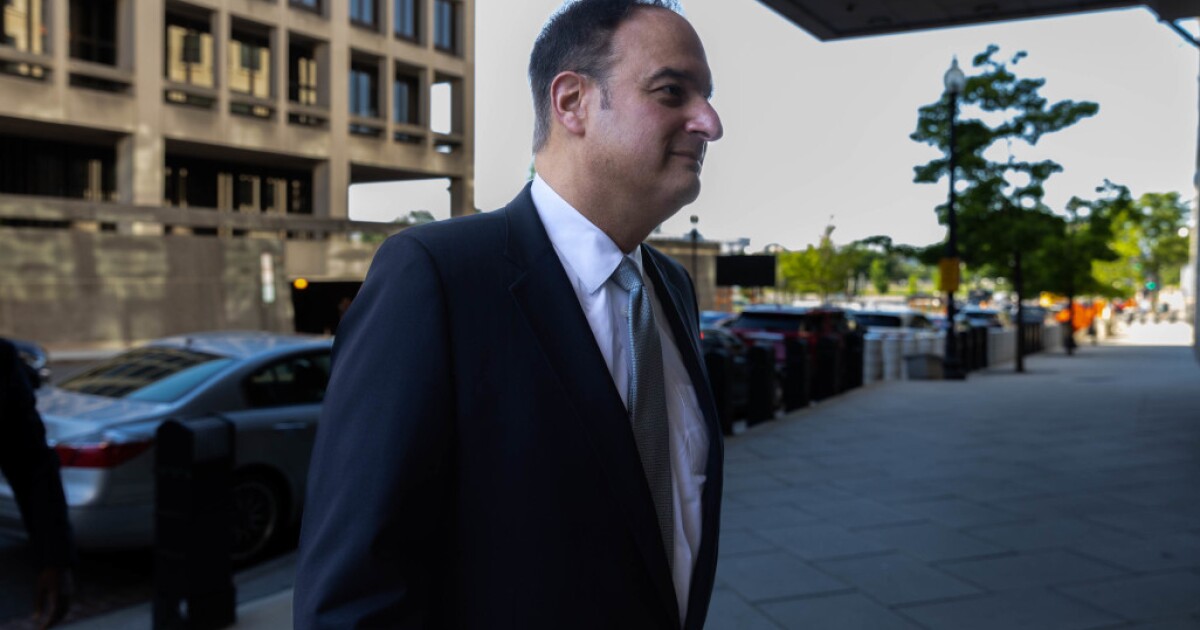 A former business associate of Rodney Joffe launched a Trump-Russia data-mining project in 2016 at the direction of the technology executive, a task the witness said made him feel “extremely uncomfortable” because it felt like “opposition research.”

A former business associate of Rodney Joffe launched a Trump-Russia data-mining project in 2016 at the direction of the technology executive, a task the witness said made him feel “extremely uncomfortable” because it felt like “opposition research.”

Jared Novick, formerly the CEO of BitVoyant in 2016, provided new details about Joffe, known as “Technology Executive-1” in special counsel John Durham’s indictment of Democratic cybersecurity lawyer Michael Sussmann, and about Joffe’s efforts to use his perch in the cybersecurity world to snoop on associates of then-candidate Donald Trump.

Novick said he dubbed the Joffe-directed project “Crimson Rhino” because the “last thing I wanted was Donald Trump’s name” displayed around the office.

Sussmann has been charged with concealing his two clients, former Neustar chief technology officer Joffe and Hillary Clinton’s 2016 presidential campaign, from FBI General Counsel James Baker when he pushed debunked allegations of a secret line of communication between the Trump Organization and Russia’s Alfa-Bank during a September 2016 meeting.

Novick said in August 2016 that Joffe “called me asking to look at research and data related to Donald Trump and Russia.” He added, “It was extremely uncommon. It was unique. We never before did any tasking like this. … This was a tasking about an individual or a group of individuals.”

Novick said the fact that it was about Trump meant it “felt very political” and that “the whole thing felt like opposition research,” but he reluctantly proceeded with the task.

He said Joffe had sent him a nondescript PDF document with the names of five to seven individuals, along with personal data. He called this a “tasking document” on “associates of Donald Trump and Russian entities” and said it included a sentence or two on each individual, their activities, and the names of Russian companies and alleged Russian affiliations. He said he immediately “knew it was a political request.”

Steele created his dossier after being hired by Fusion GPS, which was itself hired by Perkins Coie and Marc Elias, the general counsel for Clinton’s campaign. Sussmann worked for Perkins at the time too, and both he and Elias met with Steele in 2016.

Novick said he put together a research team of three people and said the plan was to “hopefully do it quickly and get rid of it.”

Novick said he co-founded BitVoyant (which was eventually bought by BlueVoyant) in 2015 and that the company was founded with support and direction from Littoral Ventures, whose leaders were Joffe, Victor Oppelman, and Raymond Saulino. Novick said Joffe was also associated with Packet Forensics and Zetalytics, whose chief data scientist was April Lorenzen.

He said he was the CEO of BitVoyant in 2016, where he worked alongside researchers and analysts who were good with data. He said he had roughly 10 employees, and he reported to Littoral Ventures and the board — Joffe, Oppelman, and Saulino.

The prosecution showed an email Novick sent to Packet Forensics on Aug. 15, 2016, in a message copied to Joffe and Oppelman, saying, “Please find our requests attached. We cast a large net based on our initial analysis pass. 1. Files named ‘Deep’ are special requests where we want specific increased details (if possible) 2. Files named ‘Wide’ are meant to cover the breadth of potential analysis (relationship discovery).”

He compared his company’s normal operations to a satellite company that does flood plain analysis for a large area but said Joffe’s tasking was similar to focusing a satellite on someone’s backyard in the hopes of finding something related to Trump and Alfa-Bank.

Novick said his team wrote the report, and “the report went to Rodney Joffe because he tasked me.”

The judge presiding over the case against Sussmann ruled last week that the prosecution cannot bring up the fact Joffe had been cut off as a confidential human source in 2021, in part because of the Durham investigation.

Defense attorney Sean Berkowitz tried to get Novick to say Joffe was highly respected in the cyber community, but the witness replied, “I think he was respected by some and not by others.”

When Berkowitz asked him about Joffe having large contracts with the U.S. government, Novick countered, “I do know that some government agencies were suspicious of Rodney.”

Novick told the defense that similar projects were being conducted by his small team, Lorenzen and Zetalytics, certain individuals at Packet Forensics, and Joffe. He said Joffe sent him “additional analysis” that his researchers didn’t support.

The defense tried to highlight his disdain for Joffe, and Novick spoke about the “challenging time with Rodney.”

Berkowitz accused him of not actually getting the tasking document from Joffe, but Novick repeated that he did.

Durham prosecutor Jonathan Algor asked Novick if he knew where the results of the project were ultimately being sent, and the witness replied, “It was to go to an attorney with ties to,” but the defense team cut him off and objected, and the judge sustained the objection.

The special counsel said Joffe also tasked researchers with mining internet data to establish “an inference” and “narrative” tying Trump to Russia. Durham said Joffe indicated he was doing this to please certain “VIPs” on the Clinton campaign.

The jury has not been able to see much of this evidence.

Joffe said in April he would be invoking his Fifth Amendment rights in the Sussmann case.

Steve de Jong, an employee at Neustar, testified last week about how Joffe “asked me to as a favor run a query over our DNS data logs to see if we saw any queries related to political campaigns and presidential elections.” He added that “in retrospect, it was mostly around the Trump campaign.”

A Durham prosecutor has said the special counsel’s team is still “looking closely” at Joffe, including pointing to a law on major fraud against the U.S. government, specifically mentioning a Defense Advanced Research Projects Agency contract.