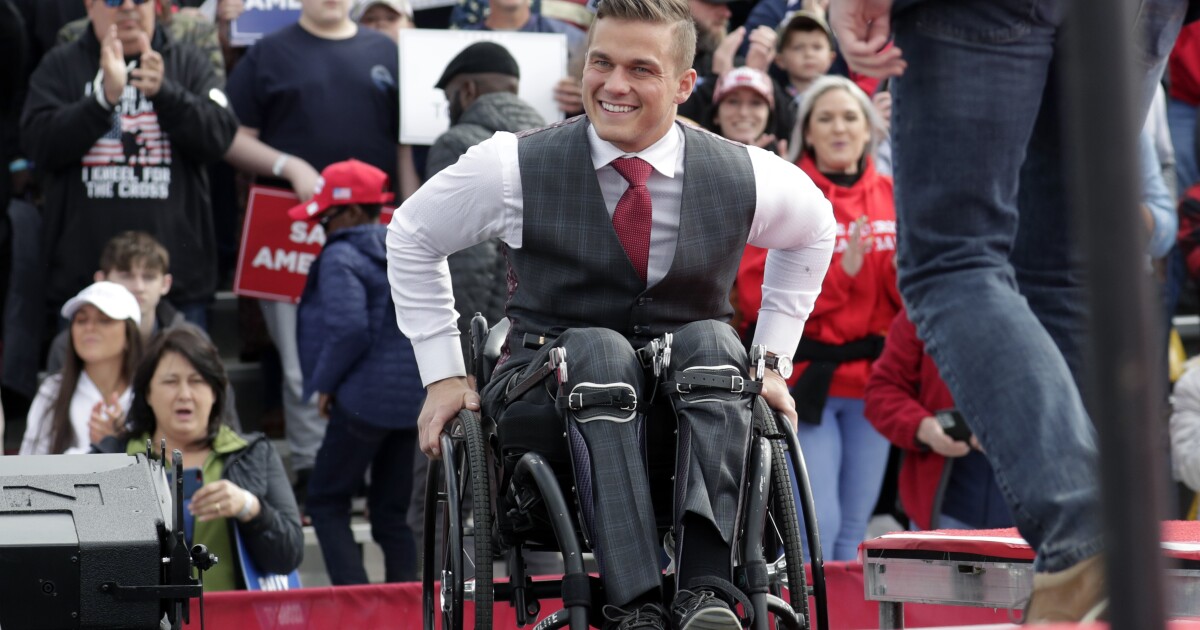 FRANKLIN, North Carolina — One by one, Republican voters in this lush mountain community emerged from casting an early ballot ahead of May 17’s crucial 11th Congressional District primary and revealed they had pulled their support for Rep. Madison Cawthorn.

FRANKLIN, North Carolina — One by one, Republican voters in this lush mountain community emerged from casting an early ballot ahead of May 17’s crucial 11th Congressional District primary and revealed they had pulled their support for Rep. Madison Cawthorn.

“I’m very conservative, and I just don’t want anybody in office that does not respect the rule of law, and so, therefore, he pretty much put a big black ‘X’ on his name,” said a middle-aged man in Franklin, who one week before the May 17 primary voted for state Sen. Chuck Edwards, and who, like most Republican voters interviewed by the Washington Examiner, declined to provide his name. “I do not appreciate his lifestyle.”

At early voting in Waynesville, 38 miles northeast of Franklin, an elderly couple that backed Edwards this year after voting for Cawthorn in 2020 spoke of the incumbent congressman as though he were a child. “He’s been too much trouble,” the man said, as his wife nodded. “He’s a bit immature. I think he was too young when he got it and he’s had some growing pains, and, unfortunately, he grew the wrong way.”

Polling in the contest is scarce, and some Republican insiders in North Carolina are betting Cawthorn survives on the strength of his fervent grassroots support and affiliation with former President Donald Trump. But there is a sense among some conservative activists in the 11th Congressional District that Cawthorn might have worn out his welcome, especially with credible alternatives to choose from in Edwards and Michele Woodhouse, a former local GOP official.

First, there was the string of traffic and gun violations, plus insider trading allegations and possible mismanagement of district and campaign funds. Now, Cawthorn is dealing with the potential for a voter revolt over simmering frustration about his perceived poor work ethic on Capitol Hill, where his attendance at House floor votes is lackluster. Concern about his professionalism has manifested locally, too.

For several months, three of the four constituent-service satellite offices that serve this sprawling rural district have been closed or suffered from severely reduced staffing. The Washington Examiner reported on complaints from constituents about the closed offices Tuesday and confirmed those complaints the same day with direct visits to Cawthorn’s district offices in Burnsville, Franklin, and Waynesville.

“I’ve never seen him in this building the two years he’s been a congressman,” said a law enforcement official who works in the courthouse building in Waynesville, where Cawthorn’s district office in that community is located. Outside the door, there is a typed sign urging constituents to visit or call the one remaining open district office, 45 miles away in Hendersonville.

Meanwhile, in Franklin, there is a handwritten sign on a nondescript door accessible only by walking through a courtroom in a municipal building that says the office opens the “1st Thursday of each month.” In Burnsville, the phone number is the same as the district office in Hendersonville.

Cawthorn is a conservative firebrand who hitched his political wagon to Trump despite originally advancing to Congress by defeating a candidate in a Republican primary backed by the 45th president. That success, and Cawthorn’s swift rise to Republican stardom, was originally a source of excitement and pride.

Conservative voters appreciated the staunch conservative values Cawthorn expressed, particularly given his youth, and thought he might shake up Washington, D.C., and a GOP they fear is run by too many “Republicans in name only.” Indeed, voters who have turned against Cawthorn lean pro-Trump and are likely to have supported Rep. Ted Budd, the candidate backed by the former president and the Club for Growth, a conservative advocacy group, in the GOP Senate primary.

Voters are not even upset with Cawthorn for his since-aborted attempt to jump to a newly configured district anchored in Charlotte in preparation for a 2026 Senate bid. They supported his ambitions and liked his plan to spread conservatism across North Carolina. The problem Republican voters have with Cawthorn is irresponsible behavior that they believe has made him completely ineffective as the conservative leader they hoped they had discovered when they elected him.

“I did not vote for Cawthorn; he made some bad choices,” a young school teacher and former supporter said after voting early in Franklin. An elderly couple that emerged from the voting booth a few minutes later complained about “too much publicity” and “too much junk.” Added a woman, also a senior, who voted for Cawthorn in 2020: “He’s not for the people. He’s for himself.”

A spokesman for Cawthorn did not respond to a request for comment.